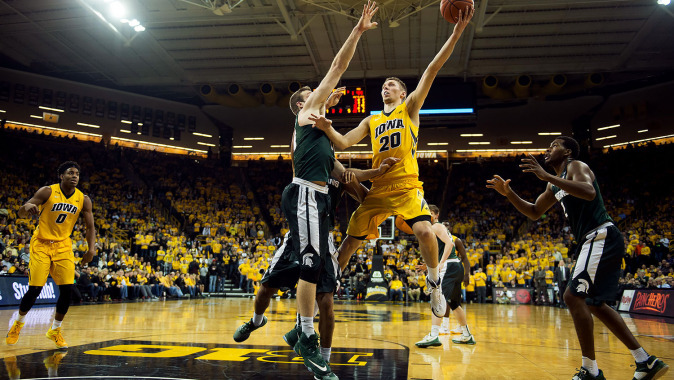 IOWA CITY, Iowa — It is only two games, but what a marvelous, impressive, head-jerking way for the University of Iowa men’s basketball team to close 2015 and open 2016.

“I think what you’re seeing is a team that understands how you have to compete, how you have to prepare, how you have to stay together and continue to believe in each other,” UI head coach Fran McCaffery said Monday at a news conference in Carver-Hawkeye Arena. “It just makes the next game that much more important.”

The next game for the Hawkeyes is tonight against Nebraska (8-7). Don’t be fooled that there isn’t a national ranking beside Nebraska’s name…as Michigan State and Purdue discovered in a five-day span, the Big Ten is an unforgiving grind, regardless of who you play.

UI senior Jarrod Uthoff is averaging 17.5 points in the last two outings. He scored 25 points with five blocked shots at Purdue after scoring 10 points with six blocks against Michigan State.

“We have developed a certain grittiness and toughness,” Uthoff said. “You go on the road to Iowa State and you’re up 20 (on Dec. 10). That takes a lot to get up 20 at Iowa State when they were ranked fourth or whatever they were. That was a tough loss for us and we turn around and get a couple big wins. That takes toughness and our team knows how to win.”

The Hawkeyes have won eight of nine games with the only blemish being the heartbreaking 83-82 setback against the Cyclones in Hilton Coliseum. Iowa rebounded with a six-point victory over Drake on a neutral floor in the Big Four Classic, then trounced Tennessee Tech by 22 at home.

After a 2-0 start to the Big Ten season, Iowa finds itself ranked No. 19 by The Associated Press for the first time since Week 11 of the 2014-15 season. The Hawkeyes are 11-3 overall with eight consecutive Big Ten victories.

The six-game run at the end of the 2014-15 regular season took Iowa from 6-6 in the league to 12-6. It required focus and concentration, two traits McCaffery sees carrying over to this season.

“You hope it’s consistent with your program every year,” he said.

During the hot start in the Big Ten, the Hawkeyes have shot 41 percent from 3-point (compared to 29 percent by opponents). They have attempted 16 more free throws, committed nine fewer turnovers, have 10 more blocked shots, and nine more steals than their opponents.

A vital cog in Iowa’s recent run has been redshirt freshman Nicholas Baer. Against Michigan State and Purdue, Baer is averaging nine points and 4.5 rebounds while shooting 70 percent from the field. He has scored in double figures in three of the last four games.

“We did a nice job of playing as a team and playing with balance,” Baer said. “It’s always good to have confidence to start Big Ten play and we know we have a very tough team in Nebraska coming in here.”

Iowa and Nebraska tip off at 8:06 p.m. (CT) on Tuesday on Mediacom Court. The game is televised by BTN with Dave Revsine and Shon Morris calling the action. The first 1,500 fans will receive an Adam Woodbury bobblehead.