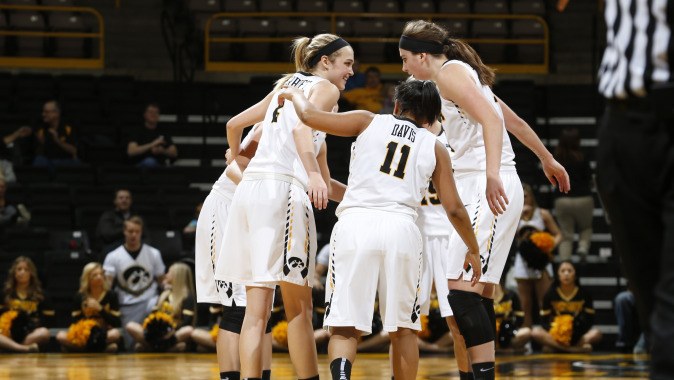 THE SETTING
No. 23-ranked University of Iowa women’s basketball takes on No. 8 Maryland on Sunday, Jan. 10 at 2 p.m. (CT) inside Carver-Hawkeye Arena. It is the second game against a ranked team this season for the Hawkeyes (#23 George Washington on Nov. 27).

GAME COVERAGE
? ESPN2 will air the Sunday afternoon contest live at 2 p.m. (CT). Pam Ward (play-by-play) and Katie Smith (color) will call the game.
? Live audio of the game can be heard on select Hawkeye Radio Network affiliate stations and on Hawkeye All-Access available at hawkeyesports.com. Brent Balbinot and Stacey Schlapkohl will call the action.
? Balbinot is in his 12th year as Iowa’s play-by-play voice.
? Schlapkohl, who played in 104 games with 49 starts from 2004-08, helped Iowa to three NCAA Tournaments. She scored in double figures in 22 games.
? Links to video, audio, and Gametracker (live stats) are available on the women’s basketball schedule page at hawkeyesports.com.

SCOUTING THE TERPS
? No. 8-ranked Maryland enters Sunday’s game with a 13-2 record overall and a 2-1 mark in Big Ten Conference play.
? The Terrapins opened the season with an 11-game win streak, before falling to UConn, 83-73 on Dec. 23. Ohio State handed them their second loss of the season on Jan. 2, 80-71.
? As a team, Maryland averages 87.2 points per game. Three players average double figures in scoring, including Shatori Walker-Kimbrough (17.7), Brionna Jones (14.3), and Brene Moseley (14.0).
? Maryland, the defending Big Ten regular season and tournament champions, were picked to finish first in the league by coaches and media. Jones and Walker-Kimbrough were preseason All-Big Ten picks by both the coaches and media.
? The Terrapins outscore their opponents by an average of 32.7 points per game and outrebound opponents by 19.5 rebounds per game.

LAST MEETING RUNDOWN
? The Hawkeyes fell to the Terrapins, 93-88, on the road on Feb. 1, 2015. It was the lone meeting between the teams last season.
? Iowa had four in double figures, including Ally Disterhoft (22), Melissa Dixon (18), Samantha Logic (17), and Bethany Doolittle (16), while Maryland had three score in double figures in Lexie Brown (26), Brionna Jones (19), and Laurin Mincy (15).
? Rebounds and second-chance points were the difference-maker for the Terrapins, who out rebounded Iowa 41 to 29 and scored 28 second-chance points to Iowa’s six.

MOVING UP THE CHARTS
? Junior Ally Disterhoft is tied for 23rd on Iowa’s all-time scoring list with 1,230 career points and is also 23rd all-time with 511 career rebounds.
? She has played in every game of her Hawkeye career with 66 consecutive starts.
? Disterhoft has scored in double figures in every game this season, and in 60 of her 66 career starts.
? The co-captain leads Iowa in points per game (16.9).
? Freshman Megan Gustafson has compiled 25 blocks through 15 games played this season, which is fourth on the all-time freshman list at Iowa. The record at Iowa in a freshman season is 79 blocks, set by Morgan Johnson in 2009-10.