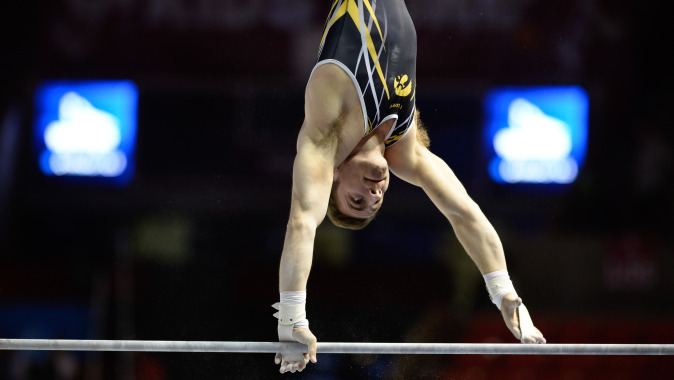 THIS WEEK:
The No. 9-ranked University of Iowa men’s gymnastics team begins its 2016 regular season at the Windy City Invitational hosted by UIC on Saturday, Jan. 17 inside the UIC Pavilion. Competition is scheduled to begin at 3 p.m. (CT).

FOLLOW ALONG:
Fans can follow the meet online through live stats. A link to live stats will be available on the Iowa men’s gymnastics schedule page at hawkeyesports.com.

2015 NCAA CHAMPIONSHIP:
For the second time in the last three seasons, Iowa qualified for team finals at the NCAA Championship in Norman, Oklahoma. The Hawkeyes finished sixth nationally after setting season high scores of 72.200 on high bar and 73.800 on floor exercise. Jack Boyle led the team individually, finishing sixth overall on high bar with a 14.850 effort to secure All-American status on the event.

2 NAMED GYMNASTS TO WATCH:
Junior Andrew Botto and senior Matt Loochtan were both named to the Big Ten Men’s Gymnasts to Watch List, announced by the conference on December 10. It is Botto’s first appearance on the list, while Loochtan earns the honor for the second consecutive season.

Botto, a Redwood City, California native, set new career bests on rings and vault in 2015. He scored a 15.050 on rings and placed second in a win against Minnesota and Nebraska on Feb. 14 and set another career high a month later with a 15.100 on vault, tying for first. Botto was named an academic All-Big Ten honoree in 2015.

SCOUTING THE FIELD:
The Hawkeyes will face off against UIC, Illinois, Michigan, Minnesota and Ohio State.

HEAD COACH JD Reive:
JD Reive is entering his sixth year as head coach of the Iowa Hawkeyes in 2015-16 and seventh in Iowa history. Reive is looking for continued success following a sixth place finish at the NCAA Championships last year. Reive has led an all-american in each of the past three seasons and has one of the highest team GPA’s at Iowa with eight gymnasts named to the 2015 Big Ten Winter Academic All-Conference team.