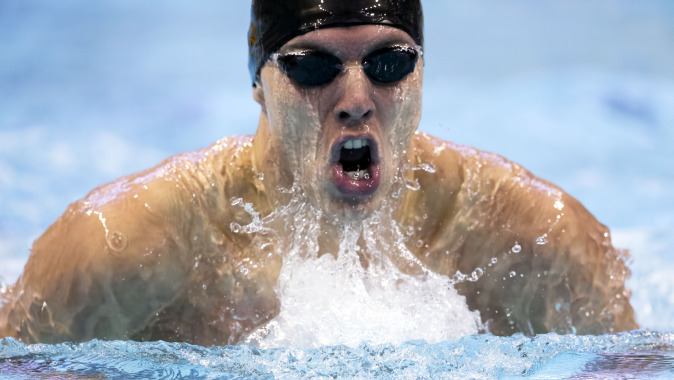 THIS WEEK The University of Iowa men’s swimming and diving team travels to South Bend, Indiana, on Friday and Saturday for the Shamrock Invitational. Action starts at 4 p.m. (CT) Friday.

LIVE RESULTS
Up-to-date results will be available on http://www.und.com/livestats/m-swim/012916/index.htm. Fans can also follow the meet via Twitter by following @IowaSwimDive.

RACKING IN THE NCAA “B” QUALIFYING TIMES
Iowa has posted 13 NCAA “B” cuts during the first half of the 2015-16 season. Below is a rundown of the Hawkeyes’ performances:

BACKING INTO FIRST
Redshirt freshman Kenneth Mende showed his best against Big Ten foe Purdue. The Germany native swam to two wins and a runner-up finish. Mende had a first-place showing in the 100 back (49.03) and 200 back (1:49.11). He also led off the runner-up 200-medley relay, where he had a split of 22.92– the fastest of the meet. Mende’s season-best time of 48.84 in the 100 back is the eighth-fastest in program history.

BRENNER B1G FRESHMAN OF THE WEEK
Freshman Will Brenner was named the Big Ten Freshman of the Week on Dec. 9 after breaking the school record on the 1-meter springboard at the Hawkeye Invitational. This record had stood since 2004 (Timo Klami); Brenner broke it by nearly seven points.

FIRST-PLACE FLYER
Sophomore Jerzy Twarowski flew fast in Iowa’s Nov. 6 meet against Purdue. The Krakow, Poland, native swam to two first place finishes, touching first in the 100 fly in 48.50 seconds and 200 fly in 1:49.28. Twarowski has an NCAA “B” qualifying time in the 100 fly, posting a time of 48.04 in the dual meet against Minnesota.

COLIN GOES THE DISTANCE
Freshman Ben Colin has helped lead the Hawkeyes in distance freestyle events this season. The Dubuque, Iowa, native swam a season-best time in the 1,000 free against Purdue on Nov. 6, touching at a time of 9:36.75, and touched in 4:35.06 in the 500, also a season best.

BOUNDING BREASTROKER
Senior Roman Trussov has led the way for the Hawkeyes in breaststroke competition this season. The Kazakhstan native swam to three top-three finishes against Purdue on Nov. 6. He had a season-best time of 55.49 in the 100 breast.

TOP FLYER RETURNS
Sophomore Jerzy Twarowski is back for his second season as a Hawkeye and his second season competing in the yards distances. Twarowski became the first Iowa butterfly swimmer to break the 47-second mark during his first collegiate season, posting a school-record time of 46.70. He also broke a 22-year old school record (Rafal Szukala) in the 200 fly, finishing with a time of 1:44.00.

ON THE HORIZON
The Hawkeyes will host Western Illinois in their final home dual of the season on Feb. 5 at the CRWC Natatorium. Action is set to begin at 6 p.m. (CT).