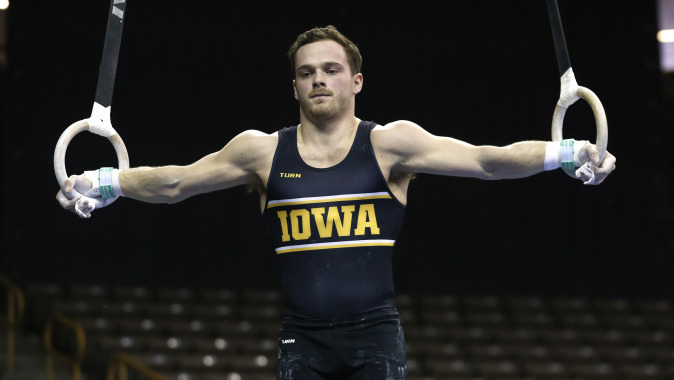 THIS WEEK:
The No. 6-ranked University of Iowa men’s gymnastics team hits the road this weekend to Norman, Oklahoma, it’s first tri-meet of the season against top-ranked Oklahoma and No. 8-ranked California. The competition begins at 5 p.m. (CT).

FOLLOW ALONG:
Fans can follow both meets through live stats and a live stream through the Periscope app. A link to live stats will be available on the Iowa men’s gymnastics schedule page at hawkeyesports.com. The meet will also be televised live on Fox Sports Oklahoma.

LAST TIME OUT:
The Hawkeyes competed in back-to-back meets last weekend against Illinois and UIC. On Saturday, Iowa fell to Illinois by less than a point, 431.150 – 430.850. Iowa won three event titles including two from senior Jack Boyle on rings and high bar. He also won the all-around competition with an 85.950.

On Sunday, the Hawkeyes traveled to Chicago for a dual meet with UIC. The team handled business, sweeping event titles and setting four career highs, including a new school record on pommel horse by senior Doug Sullivan (15.400). for the 431.800 – 388.100 win.

SCOUTING THE FIELD:
• Oklahoma enters the meet as the reigning NCAA Champion and is atop the national rankings with a six point lead.
• Individually, the Sooners hold the top gymnasts in the country on vault (Hunter Justus, 15.450) and parallel bars (Yul Moldauer, 15.800).
• Oklahoma head coach Mark Williams is in his 16th year.
• California enters the meet ranked eighth nationally by roadtonationals.com with an average score of 425.383 through three competitions.
• Senior Kevin Wolting currently holds the 10th spot nationally on floor exercise with an average of 15.200.
• Head coach Brett McClure is in his second season.

HIGH SCORING HAWKS:
The Hawkeyes jumped four spots in the latest roadtonationals.com poll in large part to their performance against Illinois and UIC in back-to-back meets last week. Iowa has never scored above a 430.000 team score in January, but in 2016, the team has already done it twice.

BIG TEN SHOWS POWER:
The Big Ten Conference has been dominant so far this season. Of the top ten teams listed on roadtonationals.com, six are from the Big Ten, including: no. 4 Illinois, no. 3 Ohio State, no.10 Penn State, no. 5 Minnesota, no. 7 Nebraska, and no. 6 Iowa.

HAWKEYE NEWCOMERS:
• The Hawkeyes welcomed four freshmen to the team for 2016: Todd Beyer II, Jake Brodarzon, Kevin Johnson, and Rogelio Vazquez.
• Beyer, a 2015 Iowa state champion in all-around, also competed at JO nationals in 2015, placing first on high bar, second on floor, and third on vault.
• Brodarzon is a 2014 national champion on vault and was also crowned the 2015 state champion on floor, rings, vault, high bar, all-around in his home state of New Jersey.
• Johnson competed at the 2015 Michigan state championships placing first on pommel horse and second on rings. He also competed at JO Nationals this past year.
• Vazquez, a back-to-back state Florida champion on rings and all-around, is a six-time JO National Championship qualifier (2009-15). He is also a regional champion on rings, parallel bars, and all-around.

SEASON TICKETS:
Iowa men’s gymnastics season tickets are on sale for $10 until January 29. Season ticket holders gain admission to three home meets against Big Ten Conference opponents and receive an Iowa gymnastics long sleeve t-shirt with their purchase. All youth, 18 and under, and UI Students can attend home competitions for free. To purchase season tickets, visit hawkeyesports.com or contact the UI Athletics Ticket Office at 1-800-IA-HAWKS.