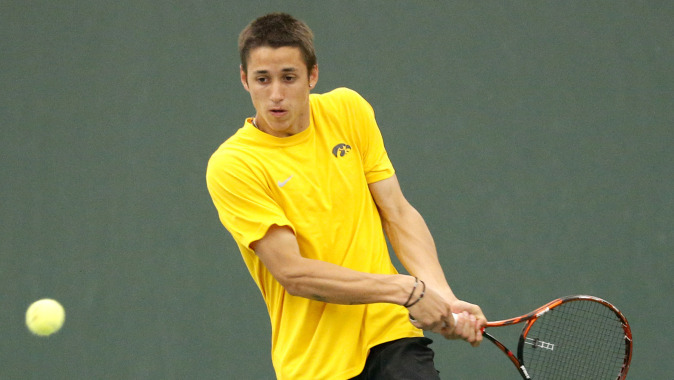 THIS WEEK:
The 62nd-ranked University of Iowa men’s tennis team is back home this Friday, Feb. 5, for a double-header at the Hawkeye Tennis and Recreation Complex (HTRC). Iowa will start the day against SIU-Edwardsville at 10 a.m. (CST). Iowa’s women’s tennis will take the court for a match against Eastern Michigan in between the men’s match-ups. The men will pick up their rackets to take on Western Michigan at 6 p.m. (CST) at the conclusion of the women’s match. Admission for all matches are free to the public.

“My preseason preparation played a great role in how I’ve been doing so far this season. I’ve been working on a lot on consistency, training in the weight room, and a lot of repetition on shots that I didn’t feel comfortable with but now I do.”

LAST TIME ON THE COURT:
Last weekend, the Hawkeyes traveled to the East Coast for the Big Ten-Ivy League Challenge. The Hawkeyes began play in Flushing, New York at the National Tennis Center against then No. 34 Princeton on Saturday. The match quickly went in Princeton’s favor when Iowa gave up the doubles point to start the day.

The Hawkeyes went on to drop the match, 6-1. Theodorou was the only Iowa win against the Tigers.

After the loss, the Hawkeyes made their way to Princeton, New Jersey where they faced then No. 47 Cornell in their second Big Ten/Ivy League Challenge match-up.

Iowa had a change of pace in their second day of play, winning the doubles point with ease. In singles, the three sophomores dominated for the Hawkeyes. Theodorou, Jake Jacoby, and Josh Silverstein carried the team to a, 4-2, victory over the bears.

“We did a great job of closing out sets when we had the opportunity and we played aggressively on the big points,” said head coach Ross Wilson of the Iowa win.

HAWKEYES RANKED:
The Hawkeyes are ranked No. 62 in the most recent ITA national rankings, released today. Iowa began the season at No. 71 and has moved up each week in the rankings since the initial rankings on Jan. 5. They are among nine other Big Ten teams in the national rankings.

COACH Ross Wilson ON SIUE & WESTERN MICHIGAN:
“We talk about all the time that it’s all up to us. We need to go out there and be the most competitive team, play disciplined, and control our emotions to the best of our ability. If we can do those three things I think we will give ourselves some good chances to have some success out there.”

LIVE STATS
Live stats will be available on statbroadcast.com. Check out our twitter page the morning of for a direct link.