Hawkeyes Set Sights on No. 6 Buckeyes 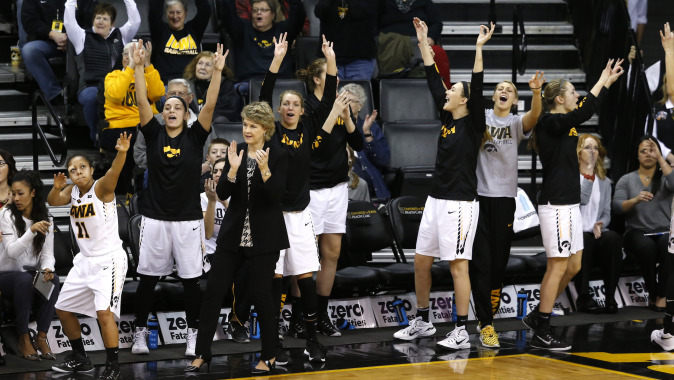 THE MATCHUP
The University of Iowa women’s basketball team tips off against 6th-ranked Ohio State on Thursday, Feb. 11 at 7:30 p.m. (CT) inside Carver-Hawkeye Arena. It is the lone regular season Big Ten Conference game between the programs this year.

EVENT PROMOTIONS
? UI faculty and staff with valid university ID receive free admission to Thursday’s game and can register to win a $100 Herky’s Locker Room gift card as a part of UI Faculty and Staff Appreciation Night. Guests of UI faculty and staff can attend the game for $1.
? Free manicures, hair styling, makeovers, and more will take place before the game for Girls Night Out. Doors open at 6:30 p.m.

GAME COVERAGE
? Thursday’s contest will air live on the Big Ten Network. Mike Wolf (play-by-play) and Brenda VanLengen (color) will call the action.
? Audio of the contest is available on select Hawkeye Radio Network affiliate stations and on Hawkeye All-Access available at hawkeyesports.com. Brent Balbinot and Kathryn Reynolds will call the action.
? Balbinot is in his 12th year as Iowa’s play-by-play voice, while Reynolds in in her first providing analysis.
? Reynolds, a member of the infamous Core Four and team captain for the Hawkeyes in 2014-15, is pursuing a law degree at the University of Iowa.
? Links to video, audio, and Gametracker (live stats) are available on the women’s basketball schedule page at hawkeyesports.com.

SCOUTING THE BUCKEYES
? Ohio State is ranked No. 6 nationally in the USA Today Coaches and No. 7 in the Associated Press polls released this week. The Buckeyes are atop the Big Ten Conference standings with an 11-1 conference record and have compiled a 19-4 on the season. The team’s lone loss in conference play came at Northwestern, 76-73, on Jan. 14.
? The Buckeyes were picked to finish second by both coaches and media in preseason All-Big Ten voting. Sophomore Kelsey Mitchell was named preseason Big Ten Player of the Year and preseason All-Big Ten by both groups. Senior Ameryst Alston was also a preseason All-Big Ten selection by coaches and media.
? As a team, Ohio State averages 85.7 points and 36.7 rebounds per game. Four average double figures in scoring, including Mitchell (25.1), Alston (18.6), Shayla Cooper (13.1), and Alexa Hart (11.1).
? Mitchell is the second leading scorer in the Big Ten and the fourth-best scorer nationally with a 25.1 points per game average. She also leads the conference and is third nationally in three-point field goals made per game with a 3.39 average.

BIG DIFFERENCE
? Since altering the lineup to include freshman Megan Gustafson and sophomore Chase Coley, the Hawkeyes have seen an increase in production offensively.
? In the last five games, Iowa has had five players average double figures in scoring rather than three in the previous 19 games. Leading the pack is junior Ally Disterhoft (18.4), followed by Coley (13.6), freshman Tania Davis (12.8), sophomore Whitney Jennings (11.6), and Gustafson (10.2).
? The team has also increased its points per game average from 73.0 to 76.0.
? Gustafson, who has led Iowa in rebounds in four consecutive games, has seen her rebounds per game average spike from 4.8 to 8.6 in the last five games, while Coley has made the jump from 5.0 to 7.4.
? The 6-3 duo accounts for 48 percent of the team’s rebounding effort and 31 percent of Iowa’s offensive production.
? Gustafson posted three consecutive double-doubles, the first of her career, in the five game span (vs. Michigan on Jan. 28, at Northwestern on Jan. 31, at Indiana on Feb. 4), while Coley logged the third of her career against Michigan on Jan. 28.

MOVING UP THE CHARTS
? Junior Ally Disterhoft is 14th all-time in three-point field goals made (99), 15th all-time in scoring (1,380 career points), and 20th all-time in rebounding (563 career rebounds) in Iowa women’s basketball history.
? Disterhoft, who has played in every game of her Hawkeye career with 75 consecutive starts, has scored double figures in every game this year and in 69 of her 75 career starts.
? Megan Gustafson has compiled 39 blocks through 24 games played this season, which is fourth on the all-time freshman list at Iowa. The program record of 79 stuffs was set by Morgan Johnson in 2009-10. Gustafson averages a team-leading 1.6 blocks per contest and has compiled three or more stuffs in seven games this season.

DOUBLE-DOUBLE X 3
? After making a statement by posting the first double-doubles of her career in back-to-back games against Michigan on Jan. 28 and at Northwestern on Jan. 31, freshman center Megan Gustafson made it three consecutive games with 12 points and a team-high 10 rebounds at Indiana.
? She netted 6-of-10 field goal attempts in her 26 minutes against the Hoosiers.
? Gustafson began the three-game stretch with 10 points and a career-high 12 rebounds against Michigan in 22 minutes.
? The Port Wing, Wisconsin, native followed that performance with 15 points and a career-high 13 rebounds at Northwestern in 33 minutes.
? Gustafson, who has started the last five games for the Hawkeyes, also notched three blocks and one steal against Michigan and at Northwestern.
? The double-double streak ended at home against 14th-ranked Michigan State, but Gustafson led the Hawkeyes in the rebounding category for the fourth consecutive game (8 rebounds), netted seven points, and posted two blocks in the contest.

COLEY EARNS B1G RECOGNITION
? Sophomore Chase Coley was named to the Big Ten Player of the Week Honor Roll for the first time in her career on Feb. 1 after wins over Michigan and Northwestern.
? Coley led the Hawkeyes offensively in each contest, posting 21 points against the Wolverines and 19 points against the Wildcats. She added 10 rebounds to her line against Michigan to earn her third career double-double.
? On the week, Coley shot .789 (15-of-19) from the field and .833 (10-of-12) from the charity stripe.
? The Minneapolis, Minnesota, native also tallied five assists and three blocks in the two-game stretch.

CALL ON ME
? Junior Ally Disterhoft, a preseason All-Big Ten selection by league coaches, has been a consistent force for the Hawkeyes all season.
? Disterhoft, who averages 36.0 minutes per contest, is second in the conference and 11th nationally with 864 minutes played this season.
? The 6-0 forward paces Iowa in points (16.8) and rebounds (5.5) per game, along with freshman Megan Gustafson. She is also third in assists, averaging 2.7 per contest, and steals, averaging 1.0 per game.
? She has scored double figures in every game of the season and in 69 of 75 career starts.
? The Iowa City, Iowa, native has led Iowa in scoring in 11 of 24 games this season, scoring 20 points or more in six contests.
? Disterhoft owns a .521 field goal percentage, team-high .366 three-point field goal percentage, and .736 free throw percentage.
? She ranks 14th all-time in three-point field goals made (99), 15th all-time in scoring (1,380 career points), and 20th all-time in rebounding (563 career rebounds) in Iowa women’s basketball history. Disterhoft is the 34th player in program history to surpass the 1,000 career point threshold.

UP NEXT
The Hawkeyes hit the road to face Minnesota on Monday, Feb. 15 at 7 p.m. (CT). The contest will be broadcast live on the Big Ten Network.