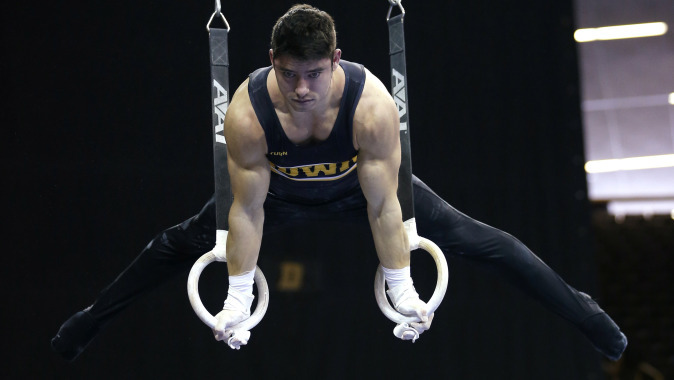 THIS WEEK:
The No. 7-ranked University of Iowa men’s gymnastics team will send seniors Jack Boyle, Matt Loochtan along with junior Andrew Botto to Las Vegas, Nevada, for the annual Winter Cup Challenge. The competition serves as the first step in selecting a team to represent the United States at the 2016 Olympics in Rio.

LAST TIME OUT:
The Hawkeyes competed in Minneapolis, Minnesota, with Stanford, Illinois and Minnesota. Iowa placed fourth with a team score of 419.700. Senior Matt Loochtan placed second overall on floor with a 15.000 and junior Andrew Botto tied for third on rings, posting a score of 14.750. Junior David Spanier set a career high on vault with a 14.800.

Cory Paterson COMPETES IN CANADA:
During the Hawkeyes off-week on Feb. 6, junior Cory Paterson traveled to Halifax, Nova Scotia, with assistant coach Ben Ketelsen for the 2016 Elite Canada Artistic Gymnastics Championships. Paterson placed seventh overall in the all-around competition with a 79.100 and third on high bar with a 13.600 effort.

BIG TEN SHOWS POWER:
The Big Ten Conference has been dominant so far this season. Of the top ten teams listed on roadtonationals.com, seven are from the Big Ten, including: No. 3 Ohio State No. 4 Minnesota, No. 5 Illinois, No. 6 Nebraska, No. 7 Iowa, No. 8 Penn State and No. 10 Michigan.