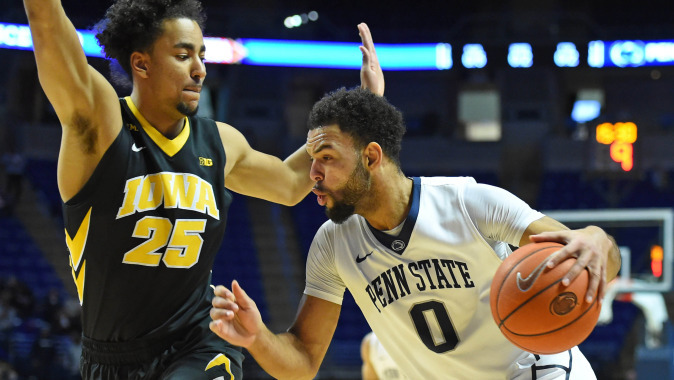 Q. Fran, was it just a night where shots weren’t falling or was it something else?
Fran McCaffery: I think it was a combination of things. We started off really well, and we scored seven in a row. You know, I felt we got pretty good looks. I thought Woody, he did a great job of going back and getting us some extra opportunities. I think Pete got tired a little bit, and you know, I think they were up into us a little bit, and I think they did a good job that way.

But again, I thought we got great shot opportunities. I thought 14 turnovers contributed to that. I can’t remember what the breakdown was in the first half versus second half. I know I think we had eight the first half, six in the second half, I think. But six turnovers is too many. Eight is way too many against a team that’s playing half-court man. We’ve got to do better than that, but we got a little hesitant at times.

Q. Some of those turnovers weren’t forced.
Fran McCaffery: Yeah, we were a little casual with the ball. Again, I go back to Pete, Pete has been really active on offense, and I think he was running out of gas a little bit.

But they hit timely threes and we didn’t is really what it comes down to.

Q. Jarrod’s foul issues in the second half.
Fran McCaffery: I think it got him sideways. In the first half, he hit that three early, but I thought he was effective. I thought he was active, and he got his second foul, and then of course he gets his third foul early. He sat for a while, and that’s hard. We debated when to bring him back, we brought him back, he got going a little bit, and then he got his fourth.

Q. During that stretch when he picked up his fourth, you took him out, that was a long stretch without a break getting to the media time-out. Did you think about calling a time-out there?
Fran McCaffery: No. You know, I look at it like this: If we’re running good offense, we were moving the ball and we were driving the ball, we were getting to the free-throw line, when you have a team that’s tired, you want to drive the ball. Now, both teams might have been a little tired, but I thought we did a really good job in that stretch of getting to the line or at least getting to the point where we were going to be getting to the line regularly because I wanted to be in a situation where down the stretch we were going to be in the bonus, and then obviously the double bonus later.

Q. There were three different times in the second half where you were up six points and you had a chance to kind of extend the lead.
Fran McCaffery: Yeah, if Baer’s three had gone in, that would have been a big one. Like I said, they hit. that’s one example. They hit a timely three and we didn’t. We had a three to go up nine, we don’t make it, they hit a three, cuts it to three.

Q. You’ve got Pete tired and Jarrod in foul trouble and only four points off the bench tonight. After a loss like this, does the bench production seem even more important?
Fran McCaffery: Well, in fairness to those guys, I only played two of them five minutes, so I probably need to get Ahmad more minutes, Brady more minutes and give them a chance, but I thought the other group from a defensive standpoint, from an execution standpoint, we were better off with them in there as long as we tried to manage them as best we could. We got Pete before the media a couple times. I thought Baer gave us some energy, big offensive rebound. I thought defensively he was terrific. I thought Dom was really good. He softened a little bit defensively. He’s a tough cover, and I thought he was moving his feet and trying to use his length, but that’s a tough cover for anybody.

Q. How do you get the pep back in their step for the next game?
Fran McCaffery: I mean, shouldn’t be hard, playing on CBS. It’s a great opportunity. We haven’t played well in the last two games, yet we have done some good things in those two games. You know, you tend to only focus on what we didn’t do, what we should have done. We did a lot of good things in both of these games. We didn’t do enough to win. We didn’t do enough at crunch time. We didn’t do enough when we’ve got a six-point — whatever. We didn’t get the necessary stops. We didn’t execute like we needed to. So we just have to do a better job of that, and they’ve got to understand that when I’m asking them to do something they haven’t already done, like they’ve already proven they can play that way, just got to get back to playing that way.

Q. They had six different guys make threes, you had two. How big of a factor is that?
Fran McCaffery: Well, if you look at it, earlier when we were really rolling, that’s how we were playing. We were harder to guard. You know, Mike and Sapp I thought played really well and I thought Mike did a lot of good things, but he’s not shooting as well, so we need Baer, Dom, Brady to step up and take some of the pressure off of Jarrod and Pete because Woody will go back and get it for you. We’ve got to get some of those guys, but again, they’re playing Dom different. He’s putting it on the deck and he’s driving the ball and he’s making plays. I was pleased with his activity level for the most part, especially on offense. Defensively he was decent. I think he could be even better.

Q. You can’t ask for more than what Adam Woodbury did, 18 boards, 10 of them offensively, was really active.
Fran McCaffery: I don’t know if I’ve ever seen a box score where a guy had 10 offensive rebounds. I can’t remember that.