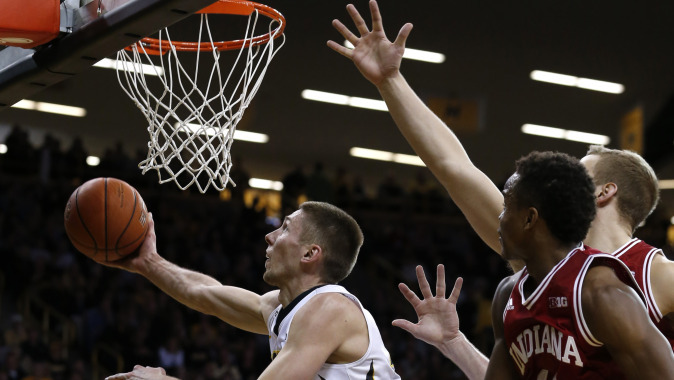 Q. Obviously, Peter had a good look at it there. Is that how you drew it up?
COACH McCAFFERY: Yeah, I mean, really smart play by Woodbury there, calls the timeout with 2.1. Lot of guys grab it, lay it in. That was one second to go and down 1, you have no chance, so we had another clean look at the 3. Pete did a great job getting open. Zach did a great job finding him but it didn’t go.

Q. Can you talk about the other guys off the bench? Wagner?
COACH McCAFFERY: Oh, fabulous. So proud of those guys. Ahmad was struggling yesterday walking around. He said, coach, I’ll be ready. He was fabulous. Baer was great, Christian Williams was great. I thought Dom Uhl’s energy level, though he doesn’t have a lot to show for with the stats, I thought he really gave us great effort.

Q. Coach, what did you tell these guys after the game?
COACH McCAFFERY: I was proud of them. You’ve got to be honest with them. The only real negative I saw was they score 7 of the first 8 to start the second half. That was disappointing, but I wouldn’t say that our effort was horrendous. It wasn’t commensurate with what was needed down 6. We needed a little bit better. Give them credit. They scored. They moved the ball. They got on the glass. They didn’t get on the glass for the first one. We did a good job keeping them off the glass. They got on the glass after the start of the second half. After that we got ten stops down the stretch and they did a lot of good stuff, shared the ball, executed.

We executed all of our plays, all of our late-game stuff. It was frustrating because we had really good looks that didn’t go in. But what you want to be able to do is make sure all five guys are where they’re supposed to be executing, and I was really proud of them for that.

Q. Was that play before the Pete shot, was that for Clemmons to take that?
COACH McCAFFERY: No, it was multiple options, multiple options. Because we had all of our shooters in. I think what happens, if you get locked into one option on a play late, they start switching and you’ve got to take the one you chose, and he had just made one.

Q. You’ve had a chance to play these guys twice. What do you think the key things are that make them good? What are the key things that stand out to you?
COACH McCAFFERY: They’ve got tremendous athleticism. They’ve got size, and they really, I keep saying, they move and share the ball well. The ball — I don’t see any selfishness at all there. I think Tom’s done a great job. I think Yogi’s done a great job. He’s a difficult guy to get under control, because you really need more than one guy to do it, but they have too many other weapons.

So Mike probably has done as good a job as anybody moving his feet, but he’s not just a driver. He’s not just a three-point shooter. He’s got in in-between game, he spins, shoots runners and he finds people and he plays at a great pace.

Q. Coach, how confident are you that you guys will be able to turn things around?
COACH McCAFFERY: Well, I think we already have. So I’m not worried about that at all.

Q. What do you mean by that?
COACH McCAFFERY: We played well. I mean, we lost to a really, really good team.

Q. You’re happy with Jarrod’s aggressiveness?
COACH McCAFFERY: Yeah, it was frustrating for him because he got 17. I wanted him to get 20 or more. But I thought early on he was really trying to drive it, shoot it, I was proud of him.

Q. Can you talk about the minutes Christian gave you?
COACH McCAFFERY: Christian’s a different kind of player. He gave us fabulous minutes because we put him in at the wing, we put him in at the point, defensively, a huge steal late. He got off the glass. He can help you in a lot of ways. He really played with the confidence that you need to play with to win.

Q. Do you feel like this group, you talked about a veteran group that can handle success, now they’ve had a little bit of skin.
COACH McCAFFERY: Well, as long as we’re going in the right direction. I thought we were better at Wisconsin games than we were at the Penn State game. We go on the road and we’re in a position to win, couldn’t make a shot down the stretch. Same thing happened today, so that’s disappointing. But we played two really good teams, three in a row, and we’re in a position to win. We fought.