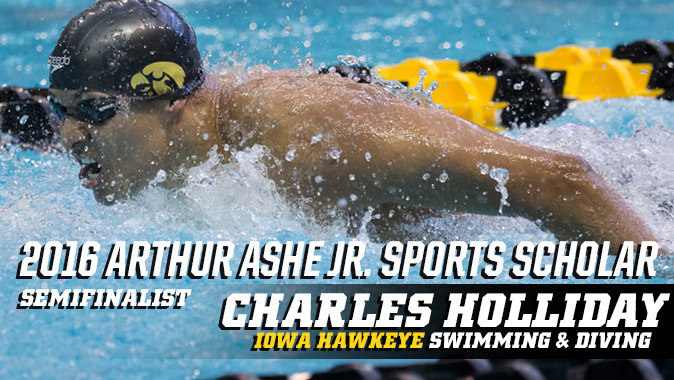 Holliday, a native of Rock Island, Illinois, is one of 15 male and 15 female semifinalists. The winners will be profiled in the April 21, 2016, edition of Diverse. The semifinalists were chosen from more than 1,000 outstanding minority student-athletes nominated by their respective institutions.

In the pool, Holliday led the Hawkeyes in the 50 freestyle in 2015-16, swimming an NCAA “B” qualifying time of 19.97 seconds at the 2016 Big Ten Championships. The time is the eighth-fastest in program history.

Holliday also had the third-fastest time on the team in the 100 free (44.58) and swam on the team’s top 200-free relay (1:18.72). In the classroom, Holliday is a two-time Academic All-Big Ten selection and a Big Ten Distinguished Scholar.

Each year Diverse: Issues in Higher Education invites every postsecondary institution in the country to participate in this awards program by nominating their outstanding sports scholars. In addition to their athletic ability, students named Arthur Ashe Jr. Sports Scholars must exhibit academic excellence as well as community activism

To be included, students have to compete in an intercollegiate sport, maintain a cumulative grade-point average of at least 3.2 and be active on their campuses or in their communities.