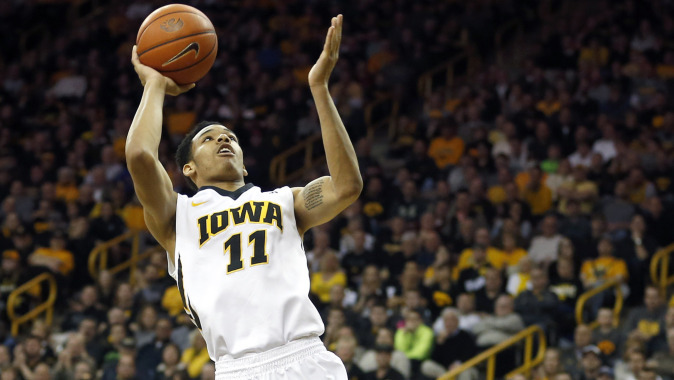 There’s a good chance the 6-foot-6 Hawkeye freshman from Decatur, Illinois, will see the court Saturday in a regular-season rematch between two 20-win teams.

“Without question he has earned that,” UI head coach Fran McCaffery said during a teleconference Friday. “He was close a couple weeks ago and I was going back and forth whether to stay with Brady (Ellingson) or go with Christian.

Williams saw 12 minutes of playing time Monday against Indiana with senior guards Anthony Clemmons and Mike Gesell winded and in foul trouble. He made 2-of-6 field goals, 4-of-5 free throws, pulled down three rebounds, and blocked two shots. Prior to Monday, Williams had played a total of 21 minutes against Big Ten Conference competition.

Versatility is one attribute that makes Williams so valuable. McCaffery expects to use him at either the 1, 2, or 3 positions.

While Williams was a bright spot during an 81-78 loss to the 11th-ranked Hoosiers, McCaffery was also impressed with the Hawkeyes’ execution. Once down by 14 in the second half, Iowa rallied to take a brief lead.

“You can still miss shots, but you have to get yourself in position where you have those shots and then you have a chance to win,” McCaffery said. “We did that perfectly in the Indiana game. I feel we have improved in that area, which is critical.”

You can throw losses to Wisconsin and Ohio State into that category as well.

“I think we did a lot good things in the last three games,” McCaffery said. “Unfortunately we didn’t close any of them out. That is frustrating because we had opportunities to win all three — the last three in particular I thought we competed harder, better, and made fewer mistakes. In the last game we had way more assists than turnovers (16 to 9), we out-rebounded them (42 to 39).”

“We will try to figure out how we’re going to beat Michigan,” McCaffery said. “I have a ton of respect for (Michigan head coach) John Beilein and the year they have had and the players they have. We’re going to be on the road, we need to be locked in on what we need to do.”

Iowa won the first meeting against the Wolverines, 82-71, behind 23 points from Jarrod Uthoff and 16 from Peter Jok.

On Saturday, the Hawkeyes might get an assist from Williams as well.