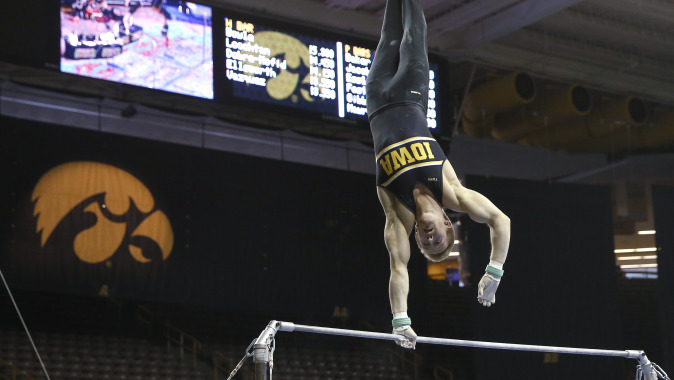 The Hawkeyes began on floor exercise, where senior Matt Loochtan placed fourth overall with a 15.050 to lead Iowa. Senior Jack Boyle recorded a 14.750 to tie for seventh place, while junior Mark Springett placed 12th with a 14.150 effort.

On pommel horse, Iowa scored a 70.950, surpassing their average of 68.425 this season. Senior Doug Sullivan placed fourth overall, posting a 15.250 to get back on track after two meets without a score above 15.000. Senior Emmanuel Monroy scored a 14.750, setting a season-high and placing seventh in the event. Sophomore Austin Hodges tied for 12th with a score of 14.000.

Loochtan was responsible for the Hawkeyes’ first top three finish of the afternoon on rings, placing third with a score of 15.100. Boyle finished close behind, scoring a 14.850 to tie for fifth place. Springett placed 10th with a score of 14.350.

Boyle led the way for Iowa on parallel bars, setting a career-high with a score of 15.000 for fourth place, while Loochtan finished seventh with a career-high matching score of 14.850. Senior Cyrus Dobre-Mofid finished 12th with a 14.100 effort.

The Hawkeyes ended the day on high bar, where Boyle grabbed Iowa’s second top-three finish of the evening with a third place result (14.900). Loochtan tied for seventh with a score of 14.650, and freshman Rogelio Vazquez set a career-high with a 14.100 to finish 11th.

Boyle and Loochtan competed together in the all-around for the third-straight meet. Loochtan placed second overall, falling .100 short of tying his career-high with a score of 86.300. Boyle posted an 85.850 for third.

The Hawkeyes return to Carver-Hawkeyes Arena on March 12 for their final home meet of the regular season against Minnesota at 5 p.m. (CT). The event will serve as Senior Night for Boyle, Loochtan, Monroy, Del Vecchio Orozco, Sullivan, and Dobre-Mofid.