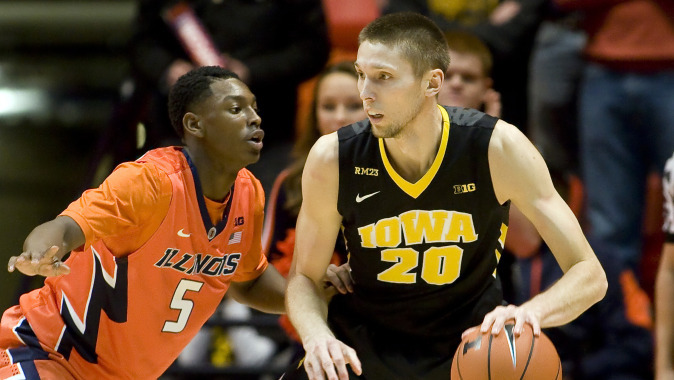 ANN ARBOR, Michigan — The Los Angeles Athletic Club announced the 2016 National Ballot for the John R. Wooden Award presented by Wendy’s on Saturday. Selected by the Wooden Award National Advisory Board, the list is comprised of 15 student-athletes, which includes University of Iowa senior Jarrod Uthoff, who are candidates for the Wooden Award All-American Team and one shall receive the Wooden Award Trophy as the most outstanding college basketball player in the United States. All balloted players have proven to their universities that they are making progress towards graduation and are maintaining at least a cumulative 2.0 GPA.

Uthoff, a native of Cedar Rapids, Iowa, has scored in double figures in all but one game this season, including netting 20 points or more 13 times. The team co-captain leads the Big Ten in blocked shots (2.7) and is second in scoring (18.54 He became the third Hawkeye in school history to amass 1,000 points and 150 blocks in a career (Acie Earl and Greg Stokes). Uthoff is the second player nationally the last 20 years to average two blocks and two 3-pointers per game (Duke’s Shane Battier in 1999-00 and 2000-01).

Voting will take place from March 14 to March 21, and voters, consisting of nearly 1,000 members of the national college basketball media, take into consideration a player’s entire season of play, as well as opening rounds of the NCAA Tournament. Fans may vote through the fan voting site, sponsored by Wendy’s, at woodenawardvote.com. The Wooden Award All-American Team, consisting of the nation’s top 10 players, and the five finalists for the Wooden Award, widely considered the most prestigious honor in college basketball, will be announced the week of the “Elite Eight” round of the NCAA Tournament and will be the focus of a 30-minute show March 28 on ESPNU at 8 p.m. (ET).

The 40th annual presentation of the John R. Wooden Award to the most outstanding men’s basketball player will be the anchor presentation of the ESPN College Basketball Awards Show presented by Wendy’s on ESPN2 on April 8th at 8 p.m. (ET). The men’s John R. Wooden Award All-American Teams will be honored during the ceremony. The Big Ten leads all conferences with four players on the final ballot, followed by the ACC and Big 12 with three each; the Big East with two; and the Pac-12, SEC and Horizon with one selection each.

Uthoff and the No. 15/16 Iowa Hawkeyes play at Michigan in their regular season finale. Tipoff is set for 7:06 p.m. (CT) at the Crisler Center in Ann Arbor, Michigan.