INDIANAPOLIS — Illinois’ Malcom Hill hit a fade away jumper with 1:16 remaining to break a 66-all tie — a basket that was the eventual game-winner — in the Fighting Illini’s 68-66 upset victory over the No. 18/20 University of Iowa men’s basketball team Thursday at the Big Ten Tournament at Bankers Life Fieldhouse. 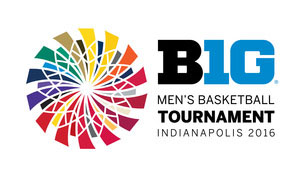 Hill’s field goal came after the Hawkeyes rallied from a 66-55 deficit with 3 1/2 minutes to play to tie the game at 66 with 1:40 left. Senior Jarrod Uthoff started the rally by completing a three-point play to make the score 66-58 before Iowa’s pressure gave the Illini fits.

Redshirt freshman Nicholas Baer’s poked the ball away from behind before getting rewarded with a fast-break dunk to cut the lead to six with 3:09 left. After Illinois guard Kendrick Nunn’s 3-pointer on the ensuing possession rattled halfway down, Iowa capitalized, using a Dom Uhl 3-pointer to cut the lead to 66-63.

Uthoff swatted Jaylon Tate on the next possession before Baer cleaned up an Anthony Clemmons miss with an and-one to tie the game at 66.

With the shot clock winding down, Hill drove to his right and connected on a jumper from the free throw stripe to give Illinois the lead. Iowa’s Mike Gesell left a pull-up jumper short on the ensuing possession, and the Illini secured the rebound and milked the clock.

After getting a defensive stop, Iowa had the ball with 15.2 remaining, but the Hawkeyes couldn’t get off a shot off. Hill picked Gesell’s pocket to force a tie up and the possession arrow was in Iowa’s favor, but with just 2.6 seconds to play. With no timeouts, Iowa threw a contested pass to Uhl, but the ball ricocheted off his hand, giving Illinois the ball and win.

Junior Peter Jok led all scorers with 29 points, tying a career-high. He made 10-of-16 field goals, including four 3-pointers, but he fouled out with four minutes to play on a double technical. Uthoff was the only other Hawkeye in double figures, netting 21 points on 9-of-16 shooting.

Jok got going with his first field goal at the 7:10 mark and Gesell followed with a 3-pointer to cut the deficit to 24-18. Jok then went berserk, scoring 15 straight Iowa points to give the Hawkeyes a 33-30 lead. Illinois led 37-35 at the break after shooting 51.9 percent in the opening half. Jok and Uthoff scored 30 of Iowa’s 35 first-half points.

Iowa tied the game on the first possession of the second half before the Illini regained the lead on a Maverick Morgan jumper 29 seconds later. Illinois pushed its lead to six on a Michael Finke 3-pointer at the 17:08 mark and back-to-back layups from Jalen Coleman-Lands and Kendrick Nunn pushed the lead to 55-47 with 14:31 left.

The Hawkeyes trailed 63-52 with 7:34 left before both teams endured a 3 1/2 minute scoreless stretch. Baer connected on a jumper at the 4:02 mark — the first field goal of the half by a player not named Jok or Uthoff.

Coleman-Lands led Illinois with 17 points — on five 3-pointers — while Nunn and Morgan had 16 points and 14 points, respectively.

Iowa (21-10) will learn its postseason destination Sunday when the brackets for the 2016 NCAA Tournament are revealed live on CBS.