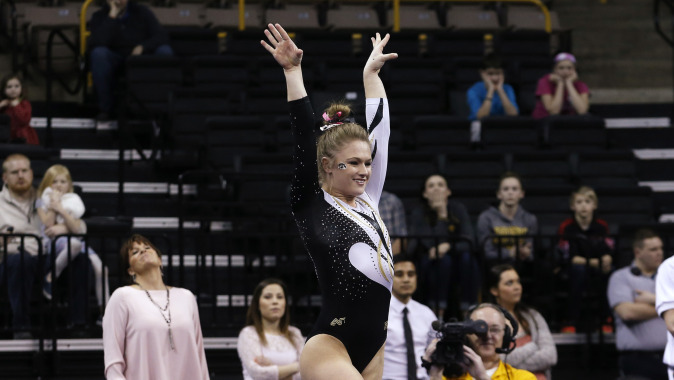 “I could not be more proud,” said UI head coach Larissa Libby. “The Big Ten is a hard conference. Everyone is good. While we had a great night, it wasn’t perfect; and there were teams that were perfect. We gave away some things that we can go back and work on. I feel like we are in a good place because we haven’t peaked. There is still a lot of season left.”

Drenth and Metcalf both competed for the all-around title, totaling scores of 39.425 and 39.325, respectively. Drenth paced Iowa with a third place finish in the all-around.

“We need to go back and work on those details that we gave away tonight,” said Libby. “This is tough competition. We have some work to do and the girls know it, but I am not disappointed. I am walking away from this meet very proud of this team. We believe we can win the Big Ten Championship from the morning session.

“I am very proud of what they did today. We will go back home and we will get better.”

The GymHawks will travel to Lincoln, Nebraska, to compete at the Big Ten Championships on March 19 at the Devaney Center. Iowa will compete in the morning session, beginning at 11 a.m. (CT). The Big Ten Network will provide live coverage of session one (11 a.m.) and session two (4 p.m.).