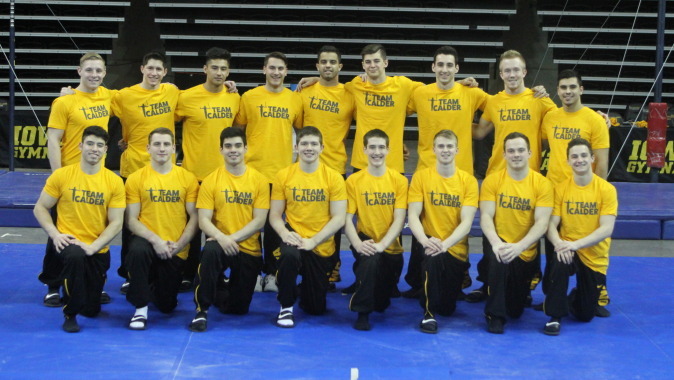 Ten-year-old Calder Wills is a level five gymnast who trains locally at the Iowa City Gym-Nest. He had only been in the sport for two years, but made major strides. He moved from the fundamental group to the competitive team in a few short months. Wills then went on to finish second in state competition in 2015.

“He first spent a few months learning fundamentals of gymnastics and moved to the competitive team,” said Calder’s mother, Brianna. “He competed last June, and finished second in the state in level four gymnastics and was competing this year until Valentine’s Day weekend in Milwaukee.”

In late February, during a visit for what they thought was pneumonia, the doctors found a massive tumor in Calder’s chest.

“We were shocked,” Wills said. “Other than just a cough and a fever, he wasn’t really sick. He was diagnosed with Stage 4 T-Cell Lymphoma, which is not great news. It is curable, but it is a long road. He will be in treatment for at least three years and is doing chemotherapy now.”

Former Hawkeye gymnast Todd Becker is one of Calder’s coaches and has worked with him in the gym since he began competing. Becker used his ties to the program to have Hawkeye gymnasts send some gifts while he was in the hospital.

“The team came and visited in the first week of March,” Wills said. “They brought him a signed poster and a signed long sleeve t-shirt.”

The team did not stop there. Iowa went on to honor Calder during its Senior Night. The team wore yellow t-shirts during their warm-up that said ‘Team Calder’ on the front and ‘#Calderstrong’ on the back to gain support for a fellow gymnast.

Becker led the charge, contacting the team with the idea of the t-shirts and made them available to order through the Iowa GymNest.

“We all hope he gets well soon,” junior Andrew Botto said. “We hope to see him in the gym soon.”

Those looking to follow Calder can visit caringbridge.org and search Calder Kicks Cancer for frequent updates. To assist with medical expenses with a donation for Calder Wills, contact either the Iowa City (319-354-5784) or Coralville (319-341-2229) Gym-Nest locations.