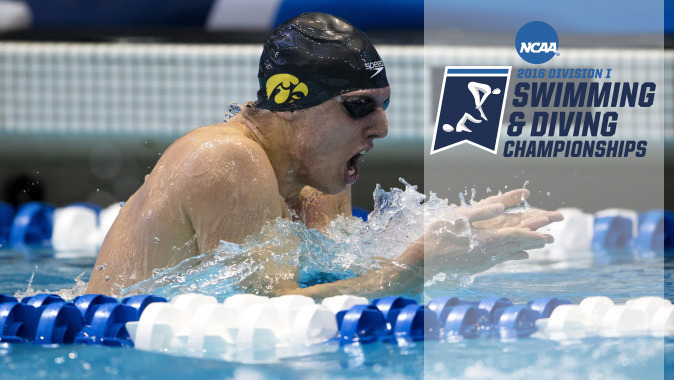 IOWA CITY, Iowa — Everything is lining up for University of Iowa senior Roman Trussov heading into the final competition of his Hawkeye career — the 2016 NCAA Swimming & Diving Championships.

The Kazakhstan native is in the best shape of his collegiate career, he is healthy, and is motivated to cap his Iowa career as an All-American.

“Everything is coming together right now,” said Trussov. “I have waited for this for four years. I’d be happy to be able to be in the top eight and accomplish that goal.”

Trussov will be competing in four events, individually in the 100 and 200-yard breaststroke and on the 200 and 400-medley relays with redshirt freshman Kenneth Mende, sophomore Jerzy Twarowski, and freshman Jack Smith. Senior diver Addison Boschult is Iowa’s fifth NCAA qualifier off the platform.

Trussov enters the championship on the cusp of being in a position to earn All-America honors. He has the ninth-fastest time in the 100 breast at 52.17 seconds, coming from a performance that earned him the silver medal, second-team All-Big Ten honors, and the school record at the 2016 Big Ten Championships.

The top eight on the podium earn All-America recognition.

“Being in the top 10 in my event gives given me a big confidence boost,” said Trussov. “The fact we made (NCAAs) in a relay where we swam a fast time gives me confidence as well.”

Iowa’s last All-American in a breaststroke event came in 1998 when Marco Minonne earned the distinction in both the 100 and 200.

When Trussov enters the pool at the McAuley Aquatic Center in Atlanta, he will draw upon his past NCAA experiences. Trussov competed in the 100 and 200 breast stroke as a freshman, finishing 24th in the 200 and 33rd in the 100.

Having been around the NCAA block, Trussov feels more comfortable this time around.

“The fact I have competed twice previously helps me a lot in thinking about advancing to the finals,” said Trussov. “I know people swim their fastest times in the morning, and I am not a great morning swimmer. It’s something I have worked on.”

Trussov is set to leave it all on the line. He has a plan to wake up, fuel his body, and move around to prepare for his races earlier. He’s going to treat the prelims like he would for a night swim because he wants to earn a chance to swim in the All-America heat.

“Being in the top eight in the morning would be an amazing thing,” he said. “I am motivated to do that. If I do, it’s really anyone’s game (in the finals) because no one is as good as the guy that left last year. It would be possible to win it all.”