Hawkeyes Gear Up for Big Tens 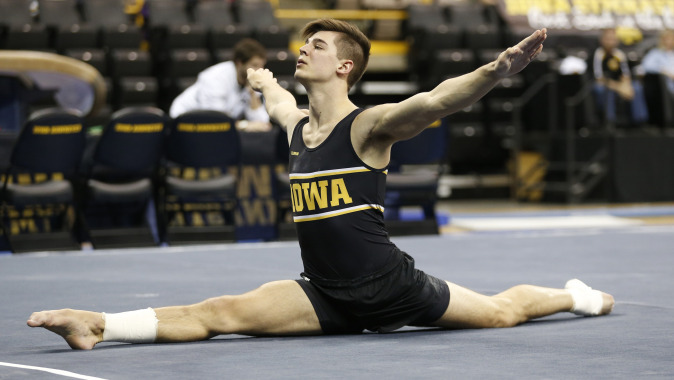 IOWA CITY, Iowa — The University of Iowa men’s gymnastics team heads into championship season with a confidence and optimism.

The Hawkeyes finished eighth in the nation, according to roadtonationals.com. The team broke numerous school records and saw contributions from unlikely competitors on their way to a successful 2016 regular season.

“It was a successful regular season,” said UI head coach JD Reive. “We still failed to accomplish the increasing consistency and scoring that we set out to do, but it doesn’t change the fact that the team is as healthy mentally and physically as they have been heading into a postseason.”

Reive’s team will be led by his first big recruiting class as head coach. Now seniors, guys like Matt Loochtan, Jack Boyle, and Doug Sullivan have ascended in the national leaderboards.

“When I think of about the regular season, it’s the seniors,” Reive said. “The specialists all the way to the all-arounders have done so much to put us in the competitive position in ways we have been unable to do since I have been here.”

“A lot of our success has come from their leadership, maturity, and willingness to improve,” Reive said. “We have seen that consistently during the season on the weekends and the fun part is that we see it every day in the gym.”

One of the pleasant surprises has been the emergence of a freshman making weekly contributions in the lineup. Jake Brodarzon has taken full advantage of the resources available to succeed in the gym.

“Jake just came, put his head down and worked,” Reive said. “He worked every day to get better and that is a hard thing to do your freshman year. He is competing on floor and parallel bars, but at the same time he has worked himself into a first alternate on several other events.”

With Ohio State hosting both the Big Ten Championships and NCAA Championships, the Hawkeyes’ familiarity in Columbus could give them an advantage as they look for consistency in their lineup.

“It’s great that we can go there for Big Tens, understand the travel, and use that as training going into NCAAs,” Reive said. “They are in great shape and are able to go in and do whatever they set out to do. To do that, they need to go in as a group and know they are putting out 30 routines and hit as many of them as humanly possible. We need to go in and be competitive.”