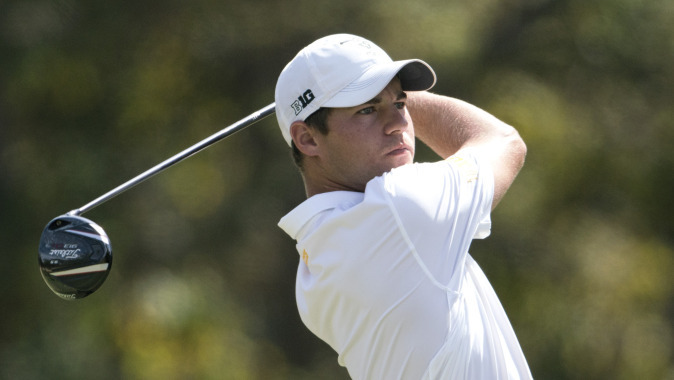 THIS WEEK
The University of Iowa men’s golf team continues its spring season with a trip to Tempe, Arizona, this weekend (April 2-April 3) for Arizona State’s annual ASU Thunderbird Invitational. The two-day, 54-hole tournament will be played at ASU’s Karsten Golf Course.

THE COURSE
Playing as a par-70, 7,002 yard course, Arizona State’s Karsten Golf Course is a classic Pete Dye, links-style course and was awarded 4 1/2 stars by the prestigious Golf Digest Rating Panel. A well-maintained and challenging design, Karsten Golf Course has been host to prestigious events, such as both the men’s and women’s Pac-12 and NCAA Championships, PING Invitational, and the U.S. Open Qualifying.

THE LINEUP
At the top of the Hawkeye lineup in the number one spot is junior Raymond Knoll followed by fellow junior Carson Schaake. Senior Nate Yankovich, freshman Matthew Walker, and sophomore Sam Meuret round out the Iowa lineup. Freshman Aaron DeNucci will be competing as an individual.

TOURNAMENT HISTORY
This weekend marks only the third time in program history that the Hawkeyes will compete at the ASU Thunderbird Invitational since it began in 1973. In last year’s event, the Hawkeyes tied for fifth and were led by sophomores Raymond Knoll and Carson Schaake who each notched top 20 finishes after tying for 14th and 19th, respectively. Iowa finished as runner-up to tournament champion Arizona State in 2014, carding a team score of 837 (-15). Former Hawkeyes Brian Bullington and Steven Ihm were the top performers for Iowa, finishing in third and tying for fourth.

WALKER, THE FRESHMAN
Matthew Walker has competed in every event for the Hawkeyes this season and is the first true freshman to compete in every fall tournament for the Hawkeyes since Cole Peevler in 2005. The Ottumwa, Iowa, native has competed in all seven events this season and is averaging 75.33 strokes per round (18). Walker’s best finish of the year came in the fall at the David Toms Intercollegiate, where he fired a three-round 228 (+12) to tie for 28th, while his best 54-hole score came at the Schenkel Invitational. He carded a 219 (+3; 75, 70, 74) at the three-day tournament. Walker fired a two-under-par 70 in the second round of the Schenkel Invitational, marking his lowest 18-hole score of the year.

OFF THE FIRST TEE
? Senior Nate Yankovich leads the Hawkeyes, averaging a career-best 72.50 strokes per round this season. Junior Carson Schaake finished with the second-best stroke average in program history last year (71.17)
? Junior Raymond Knoll has been Iowa’s top finisher two times this season, which includes his first collegiate title at the GolfWeek Conference Challenge.
? Iowa’s best finish of the season came at the GolfWeek Conference Challenge. The Hawkeyes took home the tournament title with a 54-hole 842 (-22) — the fifth best 54-hole score in program history.
? Iowa’s lowest round of the season came in the second round of the GolfWeek Conference Challenge (273; -15). Yankovich and Schaake both carded a six-under-par 66 to pace the Hawkeyes.
? Knoll, Schaake, and Yankovich are each tied with a team-best seven rounds of at or below par golf this season. As a team, the Hawkeyes have notched 27 rounds of at or below par golf this season.

A TEAM WITH DEPTH
This season, four Hawkeyes have combined for six top-10 individual finishes. Senior Nate Yankovich and junior Carson Schaake lead the team with two apiece. Yankovich’s best finish came at the GolfWeek Conference Challenge where he tied for fifth, while Schaake’s came at the David Toms Intercollegiate after tying for fourth. Junior Raymond Knoll — the GolfWeek Conference Challenge co-medalist — and sophomore Sam Meuret each notched one top-10 finish in the fall.

LOOKING AHEAD
Following the ASU Thunderbird Invitational, the Hawkeyes take a week off before hosting the annual Hawkeye Invitational. The two-day, 54-hole tournament begins on April 16 at Finkbine Golf Course in Iowa City, Iowa.