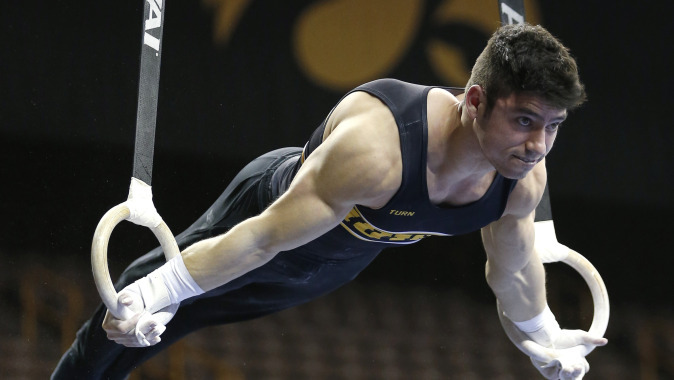 Five Hawkeyes qualified for individual event finals tomorrow night. Jack Boyle (rings, high bar), Matt Loochtan (floor, rings), Doug Sullivan (pommel horse), Austin Hodges (pommel horse), and Dylan Ellsworth (vault) qualified for individual event finals by placing in the top 10 in an event. Ellsworth is in a five-way tie for the final spot in the individual finals and a tie breaker will be given.

“They did a good job,” head coach JD Reive said. “We did not have a bad meet by any means. The scoring was lower across the board and we had a couple dings here and there, but otherwise it was a good meet. We fought all the way through the entire meet.”

Iowa began to look stronger as the meet went on and it showed on rings. Iowa scored a 72.250 thanks to Loochtan’s career-high 15.550, placing him second overall. Boyle followed him with a 14.900, placing eighth and Springett tallied a 14.100 for 25th place.

The Hawkeyes finished strong with a team high event score of 72.900 on vault. Ellsworth tallied a 14.850 for eighth place while junior Andrew Botto and Loochtan recorded scores of 14.650, tying for 17th.

The Hawkeyes are back in action tomorrow night for individual event finals. The competition begins at 6 p.m. (CT) on Big Ten Network.