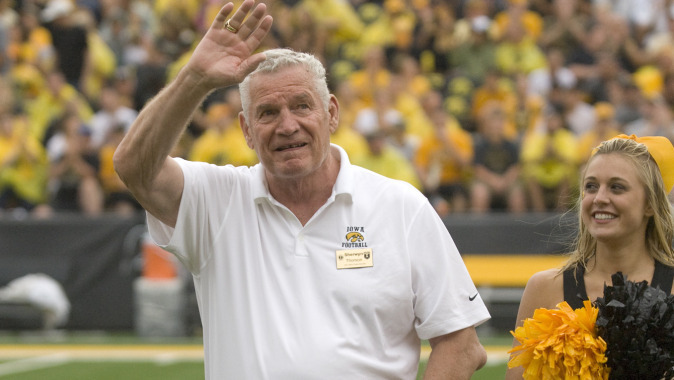 IOWA CITY, Iowa – – Sherwyn Thorson, who earned All-America honors in both football and wrestling during his University of Iowa career, passed away Wednesday following a lengthy battle with cancer. He was 75.

Funeral services will be held Saturday, April 8, at 1 p.m. at St. Olaf Lutheran Church in Fort Dodge. There will be a celebration of life from 3-6 p.m. Saturday at Willow Ridge.

“Sherwyn Thorson was able to compete at the highest level in two sports during his Iowa career,” said head football coach Kirk Ferentz. “To play both offense and defense on the football field, and also win a national wrestling title, speaks to his talent, but also to his dedication to excellence. Our condolences go out to his wife, Linda, and the entire family.”

“Fans and friends of Iowa athletics have seen the passing of two great Hawkeyes,” said Barta, in regards to Thorson and basketball All-American Murray Wier, who also passed away Wednesday. “Along with the passing of long-time supporter Dick Jacobson late last week, we have lost three great Hawkeyes in a short period of time. Our thoughts and prayers go out to all the families.”

Thorson lettered for the Hawkeye football team from 1959-61, starting 25 of 27 games over that three-year period as an offensive guard and linebacker. Thorson and the Hawkeyes posted an 8-1 record in 1960, winning the Big Ten title. The Sagarin Ratings, along with at least three additional ranking services, have recognized that Iowa team as national champions.

As a Hawkeye wrestler, Thorson finished as the national runner-up in 1960. He did not compete in wrestling in 1961, but returned to the sport to win the heavyweight national title in 1962, helping the Hawkeyes place third in the team standings, the highest national finish for the program at that time.

Thorson earned second team All-Big Ten football honors in both 1960 and 1961 and was a third team All-American as a senior. He competed in the Blue-Gray and the Coaches’ All-Star games following his senior season.

After being selected in both the NFL (Los Angeles Rams, seventh round) and the AFL (Boston Patriots, third round) drafts, Thorson elected to play in the Canadian Football League. Playing with the Winnipeg Blue Bombers (1962-68), Thorson helped his team win the Grey Cup in 1962 and return to the title game in 1965. He was named a Western Conference All-Star in 1962.

Born May 10, 1940, Thorson was an all-state football player and state wrestling runner-up at Ft. Dodge Senior High School. He was inducted into the Senior HS Hall of Fame in 1967.

He is survived by his wife, Linda, children Tjeran and Joryn, and four grandchildren, Lehr, Asle, Ayden and Amelia.