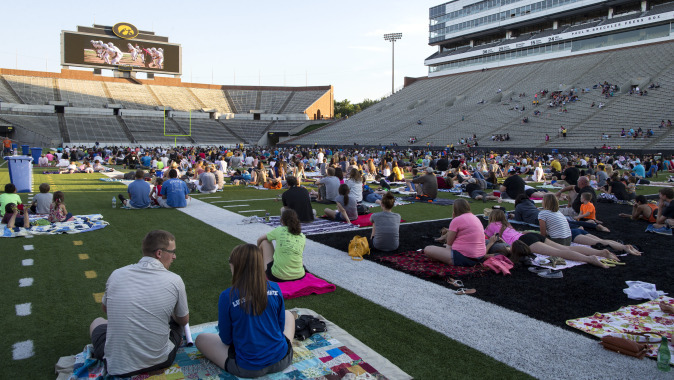 IOWA CITY, Iowa — The UI Athletics Department will open the gates to historic Kinnick Stadium on a Saturday night in June once again this summer, but it won’t be for a football game. Instead fans will be invited to throw a blanket on the artificial turf and enjoy a movie on the biggest screen in the state of Iowa.

The UI’s second Annual “Movie Night at Kinnick” presented by SCHEELS will be staged Saturday, June 11. Admission will be free. Final details will be released next month, but it is anticipated that the movie will begin at 7:30 p.m.

Guests will have access to the playing field, as well as the north and west grandstands. A limited selection of items will be available for purchase from the concessions stands, however, fans will only be allowed to bring bottled water on the playing field.

Minions (Animation) — Ever since the dawn of time, the Minions have lived to serve the most despicable of masters. From T. rex to Napoleon, the easily distracted tribe has helped the biggest and the baddest of villains. Now, join protective leader Kevin, teenage rebel Stuart and lovable little Bob on a global road trip where they’ll earn a shot to work for a new boss-the world’s first female super-villain-and try to save all of Minionkind… from annihilation.