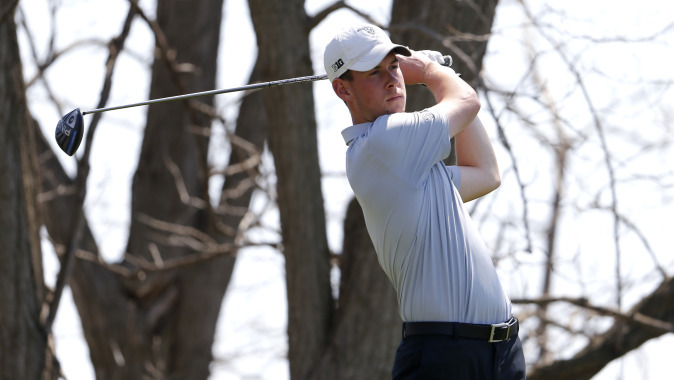 NEWBURGH, Ind. — Led by three top 10 finishers, the University of Iowa men’s golf team captured a second place finish at this weekend’s Big Ten Championships, marking the fourth straight year the Hawkeyes have placed third or better at the event. Iowa carded a 285 (-3) in Sunday’s final round, finishing the 54-hole tournament at 851 (-13; 285, 281, 285).

“I couldn’t be more proud of how we played this weekend,” said UI head coach Tyler Stith. “To have three players finish in the top six at the Big Ten Championship is pretty strong.

“We played well enough to win today. It took a record breaking performance from a top 5 team to beat us.”

Leading the way for the Hawkeyes was junior Carson Schaake, who tallied a three-round 210 (-6; 70, 67, 73) to finish fourth overall and earn All-Championships Team distinction. Schaake’s fourth place finish matches his best finish of the year and his fourth top 10 finish of the season, while his 54-hole score ties for his best of the year. He made par or better on 14 holes in Sunday’s final round, including birdies on holes 2, 13, and 15.

Joining Schaake on the All-Championships Team is fellow junior Raymond Knoll. The Naperville, Illinois, native jumped 15 spots on the leaderboard after carding a final round 67 (-5) — matches Iowa’s lowest round of the tournament — to capture a fifth place finish. Knoll ended the weekend at 212 (-5; 71, 74, 67) in what was his best 54-hole performance since winning the GolfWeek Conference Challenge in September.

“I’m happy for Raymond,” said Stith. “He’s been working hard and his performance in today’s round and throughout the weekend validates all his work. 67 in the final round of the Big Ten Championship at Victoria National is pretty special.”

Freshman Matthew Walker was consistent throughout the three-day event, carding back-to-back-to-back rounds of 71. Walker tied for sixth at three-under-par 213, marking the best finish and the second top 10 finish of his Hawkeye career. He made par or better on 17 holes on Sunday, carding birdies on holes two and 11.

Senior Voramate Aussarassakorn tied for 60th, respectively, following rounds of 79, 79, and 77. He finished 19 strokes over par at 235.