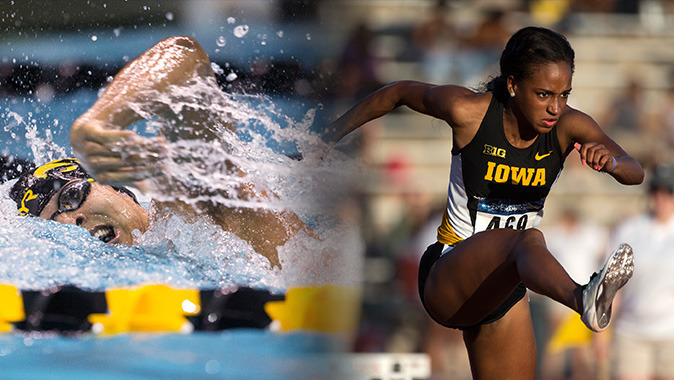 The awards recognize individuals who have made meaningful and significant contributions to the University of Iowa or surrounding communities through their vision and action, sense of responsibility, devotion, and diligence; and through their inspiration, good judgement, and will.

Holliday, a member of the UI men’s swimming and diving program, led the Hawkeyes in the 50-yard freestyle as a senior in 2015-16. He swam an NCAA “B” qualifying time of 19.97 seconds at the 2016 Big Ten Championships, the eighth-fastest time in program history.

The Rock Island, Illinois, native will receive his bachelor’s degree in human physiology this month. Holliday has conducted microbiology research funded by NASA, was on the Dean’s List for six semesters, and was also a President’s List honoree.

This fall, Holliday will join the Black Medical Association, where he will mentor young minorities and advocate for diversity and health equity in medicine. Holliday was a semifinalist for the Arthur Ashe, Jr., Sports Scholar Award, for which there were more than 1,000 nominations.

The Indianapolis native will receive her bachelor of science degree in sport and recreation management and entrepreneurship this month. Holder is a member of the Student-Athlete Academic Services Minority Focus Group Advisory Committee, the Presidential Committee on Athletics Well-Being Committee, and coordinator of ISAAC’s video rendition of Martin Luther King’s “I Have a Dream” speech,

Holliday and Holder will be honored for their achievements at the CDE graduation reception on May 12 in the Iowa Memorial Union Main Lounge.