Tausaga Wins Things, That’s What She Does

That’s why it came as no surprise that she reached for her implement as Florida State’s Shanice Love entered the discus ring for her sixth and final throw Saturday at the NCAA Championships at Mike A. Myers Stadium. Tausaga could have left her discus in the rack, she didn’t need her sixth throw. As it turned out, she didn’t need throws three, four, or five either.

Tausaga, a University of Iowa junior from Spring Valley, California, hit a personal-best of 207-feet, 6-inches on her second attempt to win her first national title and become a three-time All-American in the event. It is the first outdoor national championship for a Hawkeye female since Nan Doak won the 10,000-meter run in 1985 — coincidentally, that meet was also held in Austin.

“I was seventh (in the NCAA) my freshman year, fourth (as a sophomore), and I was like, you know what? There is more in me,” Tausaga said. “I was expecting to be at least top 3, and for me to be the top out of all of them is amazing.

“The same mindset goes for every year I compete: make sure I do better than I did the previous year. This is a great testament to how I put in the work and how I matured to get to that top spot.”

Because of what she accomplished Saturday, the best Tausaga can do in 2020 is duplicate her national championship effort. What has been remarkable is the run Tausaga enjoyed during this postseason. Typically, she says, whenever she has a big performance in a meet, she flattens a bit and it takes a while to work back to the top.

On May 12 at the Big Ten Outdoor Championships in Iowa City, Iowa, Tausaga won her third consecutive discus crown with a throw of 197-feet, 9-inches, a Francis X. Cretzmeyer Track facility record.

On May 24 at the NCAA West Preliminary in Sacramento, California, she not only won the event with a throw of 205-8, but it turned out to be farther than any mark coming out of the NCAA East Preliminary as well.

That set the stage for Saturday’s battle. 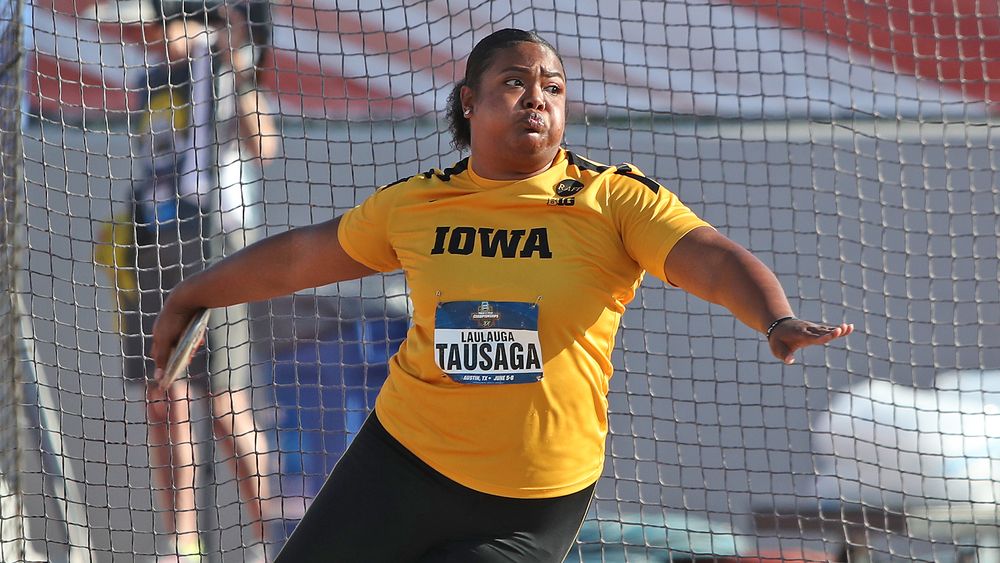 "The same mindset goes for every year I compete: make sure I do better than I did the previous year. This is a great testament to how I put in the work and how I matured to get to that top spot."

“I felt it come off my fingers and I was like ‘that’s the one,'” Tausaga said.

An emotional competitor, Tausaga let out a yell that could be heard in Waco. She clapped her hands, pumped her fist in the air, and waved a towel that earlier kept sweat off her hand and allowed her discus to sail 207-6.

No opponent surpassed 200 feet the rest of the competition, except Tausaga, who went 200-3 on her first throw of finals.

“I was hoping to build on (the winning throw), but I didn’t quite get to it,” she said.

In the finals, Tausaga was the ninth and final competitor. She spent most of Round 6 pacing near the cage and keeping an eye on distances from her opponents. When Love threw 197-1 on her final attempt, it was time to celebrate.

Instead, probably out of habit, Tausaga grabbed her discus and wearing a championship-level smile, she stepped triumphantly into the ring. What ensued was a foul, but nobody in Hawkeye nation noticed. It was a moot point; Tausaga had already climbed to the top of the podium.

Then Tausaga began to sob. She pointed to the black RAFF sticker on her shirt and quietly said, “This is for you, coach Raff.”

Volunteer assistant coach John Raffensperger passed away April 22 and the Hawkeyes have honored him by wearing memorial patches during their final four meets.

The tears continued as Tausaga thought about another member of the Hawkeye staff, her throws coach Eric Werskey.

“I give him a lot of hell, he is an amazing man and he works with me,” Tausaga said, again fighting back tears “We have a great relationship. He knows when things aren’t working and he knows how to fix it on the dot. He doesn’t try to swarm me with information.

“He has poured so much knowledge into me and for him to have success with me is amazing because I owe it to him. Our whole throws team owes it to him. He has made us so much better as a team and I’m so glad we have him.”

Aside from the Hawkeye athletes, coaches and staff in the stands, Tausaga had a big cheering section that consisted of relatives from the state of Texas. Her mother, Aveaomalo, drove to Austin from her home in California.

“Thank God I actually did something for her,” Tausaga said. “I’m happy they got to witness what my coach and I have poured into this whole year.”

The year took an unfortunate twist at the NCAA West Preliminary. After placing fourth in the shot put at the 2018 NCAA Championships, Tausaga finished 13th at Sacramento and missed advancing to Austin by one place.

“I had a hard falling out with shot at Sacramento and it broke my heart,” Tausaga said. “I knew we had to do something to redeem ourselves and it happened.”

Tausaga wins things, that’s what she does.