Schaake Bros Playing with the Pros

IOWA CITY, Iowa — Four years ago, Alex Schaake, a freshman at the time, carded a final-round bogey-free 66 (-4) to help the University of Iowa golf team jolt up the team leaderboard in the final round of the 2017 Big Ten Championships to tie for fourth.

A round full of greens in regulation and fairways hit, Schaake, the fiery competitor that he is, still wasn’t content.

“Even though it was a good round, I still feel like I could have done a little bit better for the team,” he said after the round.

Two and a half weeks later, Alex’s older brother and biggest role model, Carson, wrapped up his career at Iowa at the NCAA Baton Rouge Regional with a three-round, 10-over-par 226.

It was the best Hawkeye finish of the tournament, but it was the last time the Schaake bros would be playing in a tournament together of that caliber.

Like old times, Carson, the 2015 Big Ten Champion, and Alex, the 2019 Big Ten Golfer of the Year, will be suiting up together this time at the Korn Ferry Tour’s 2020 Pinnacle Bank Championship, July 30-Aug. 2, in Omaha, Nebraska, at Indian Creek.

“This is definitely the biggest event we’ve played in together,” Alex said. “I played in the Pinnacle Bank two years ago and Carson payed at the John Deere Classic, but never together in a Korn Ferry or PGA Tour event. I’m super excited for myself, but also for him because this is a big break and he can make money, which relieves a lot of stress to be able to play in more events.” 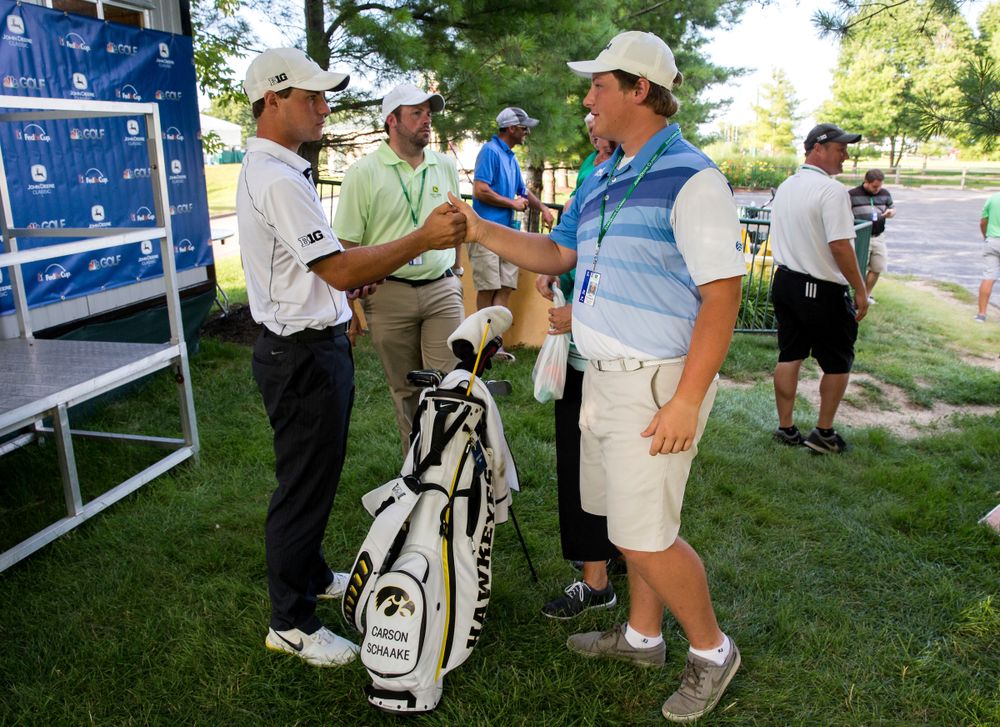 Carson (left) and Alex (right) following the first round of the 2015 John Deere Classic.

For the Omaha natives to play together in an event of this status in their backyard, it’s about the perfect script.

“Alex and I have played Indian Creek several times,” Carson said. “We both really like the course. It’s not far from our house. (The course) feels like home since we have been out there so much. It gives us a good feeling, knowing we’ve played there more than anyone else in the event.”

It will be a nice home course advantage for Carson in his first ever Korn Ferry Tour event after he won a 36-hole, one-day qualifier by three strokes at Arbor Links. From the fairway behind Carson, Alex stood with his hands in the air watching Carson drain the clinching putt.

The brotherly love is something that’s always been there for them. Carson took Alex under his wing during his freshman year at Iowa, which allowed Alex to learn and thrive quicker. But make no mistake, they love to compete against each other.

“Most people wouldn’t understand our competitiveness,” Carson said. “At the end of the day we are brothers and support each other at every moment, but when it comes down to it, we want to beat each other because we know that will make the other one better in the end.”

“On the golf course, Carson and I are super competitive,” Alex added. “I want us both to play well for sure, but I always want to play better and I’m upset if I don’t. He’s the same way. Our success growing up is because we had each other to make us better. I hope it stays like that because that’s when I have the most fun.”

Down two strokes heading into the final round of the Indian Creek Invitational, Alex made a 25-foot putt to par the 17th hole and got up and down from a plugged bunker lie on the 18th hole to win and qualify for his second Pinnacle Bank Championship as an amatuer.

Amid the COVID-19 pandemic, the brothers practiced together daily to stay sharp, and it paid off. The Schaake bros get their chance with the pros later this week.