It is not easy joining the Big Ten Conference 100-win coaching fraternity. If it were, there would be more than Ohio State’s Woody Hayes (153 wins), Michigan’s Bo Schembechler (143) and Chicago’s Amos Alonzo Stagg (115). The fourth joined Saturday, by way of the University of Iowa’s 41-21 victory over Penn State in Beaver Stadium.

Not only did Kirk Ferentz add his name to an impressive honor roll, the Pittsburgh native did it in his home state.

“Winning here is special,” Ferentz said. “As a kid I grew up watching Penn State football and had so much respect for it.”

The reward in the victorious locker room for Big Ten win No. 100 was a game ball and standing ovation. And plenty of admiration from student-athletes.

“There is no one I would rather play for,” Iowa quarterback Spencer Petras said. “Great coach, outstanding accomplishment, especially at a historic place like Penn State; what an accomplishment.”

The reaction from the head coach was pure emotion. And his players loved it. 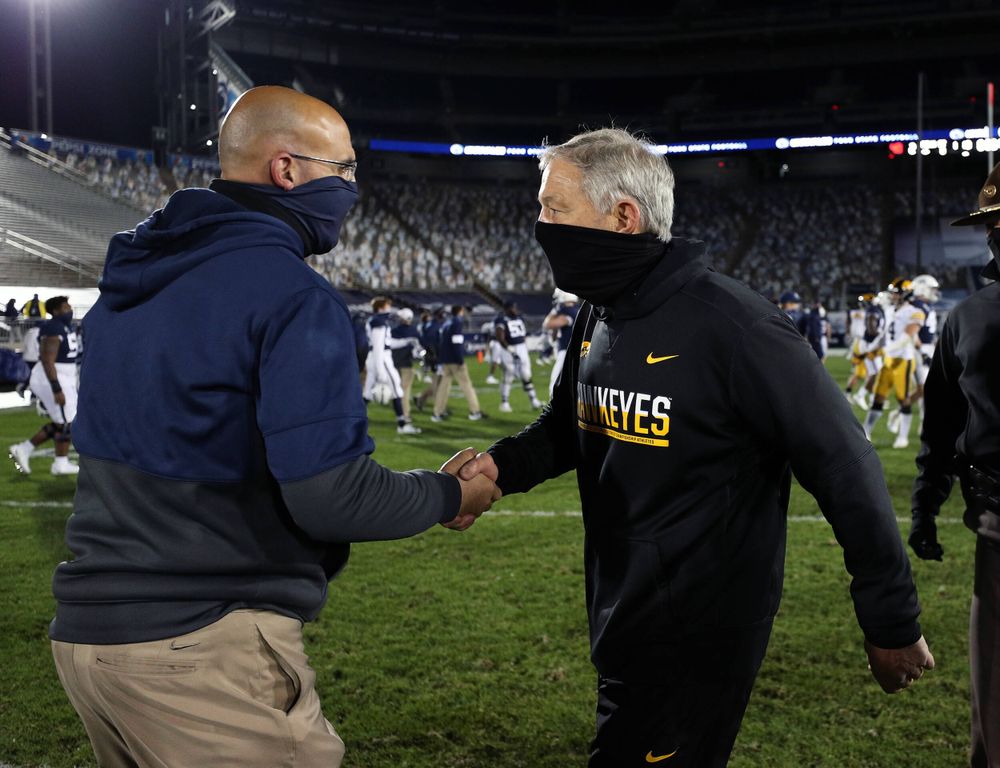 “You have to be at a really good place and you have to be around really good people. I can say that about my 31 years at Iowa: the common denominator has been good players, good coaches, good support staff, good administration and a quality place to work and live. How lucky can you get?”

“Who wouldn’t be (emotional) in his position?” Iowa defensive lineman Zach VanValkenburg said. “That is an amazing achievement.”

“I wouldn’t want to play for anyone else,” Niemann said. “He cares about us and for him to get emotional after his 100th win shows his investment in this place and what everything means to him.”

100 Big Ten wins.
The fourth most of any coach in B1G history.#Hawkeyes pic.twitter.com/j4HFXk7p7G

The postgame atmosphere was great, Ferentz said, adding he was glad the players were part of the celebration.

“The bigger picture is, things like this don’t happen by accident,” Ferentz said. “You have to be at a really good place and you have to be around really good people. I can say that about my 31 years at Iowa: the common denominator has been good players, good coaches, good support staff, good administration and a quality place to work and live. How lucky can you get?” 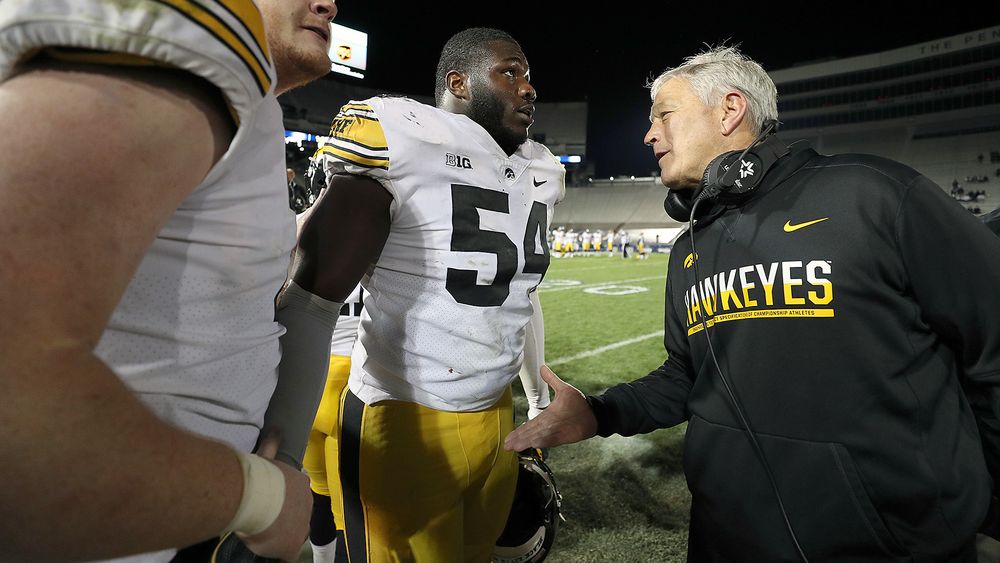 Ferentz’s thumbprint was all over this victory. His defense forced multiple turnovers for a seventh consecutive game, but the place where the song remained the same for a Hawkeye team was with the physicality of its offensive line and a running game that has netted 175 or more yards three straight games.

“Running game sure does help,” Ferentz said. “It’s a combination of everybody, not just our linemen. Our fullback, tight ends and receivers did a good job blocking and the backs are obviously running hard.”

The historical achievement by Ferentz as head coach began on Oct. 7, 2000, with a 21-16 win on Homecoming over Michigan State in Kinnick Stadium. It was his ninth Big Ten game, meaning he relied on patience even before he relied on consistency.

Nine of those 100 wins have come against Penn State, including five in a row from 2000-04 and three straight from 2008-10. Saturday’s 20-point margin of victory is Iowa’s largest in series history at Penn State.

Ferentz had 97 Big Ten wins on Nov. 7 before Iowa hammered Michigan State, 49-7. The Hawkeyes have followed with lopsided victories at Minnesota on Nov. 13 (35-7) and at Penn State. Iowa has outscored its last three opponents by 90 points.

“This is an important win for us to keep moving forward,” Ferentz said. “It is a good step.”

It’s the third consecutive “good step” for the Hawkeyes, who are 3-2 heading into a Black Friday Heroes Game against Nebraska. Before preparation begins for the Cornhuskers, Ferentz said his players have every reason to enjoy their ride back to Iowa City.

The same pertains for the head coach.