UNIVERSITY PARK, Pa. — It ended as a happy Hawkeye Saturday in Happy Valley.

The University of Iowa football team scored 28 unanswered points in the second and third quarters en route to a 41-21 win over Penn State on Saturday afternoon at Beaver Stadium. The victory is Iowa’s third straight and it gives head coach Kirk Ferentz his 100th career Big Ten win.

“Coach got the game ball and a standing ovation,” said sophomore Spencer Petras.  “There is no one we’d rather play for. He’s an outstanding coach and this is a great accomplishment and for it to come at an historic place like Penn State.  What an accomplishment.”

The Hawkeyes out-gained Penn State, 361-342, in a balanced offensive attack. Iowa rushed for 175 yards on 46 attempts and all four offensive touchdowns came on the ground. Petras completed 18-of-28 attempts for 186 yards.

Senior Mekhi Sargent notched his first 100-yard game of the season, rushing 15 times for 101 yards and two touchdowns. Sophomore Tyler Goodson had 78 yards on 20 carries and one score, and Petras scored via a quarterback sneak.

Petras spread his 18 completions to eight different receivers with Nico Ragaini leading the way with four catches for 46 yards.

Defensively, the Hawkeyes surrendered the 342 yards, but the unit created havoc. Iowa forced four turnovers and had five sacks and 10 different Hawkeyes combined for 10 tackles for loss. Defensive linemen Chauncey Golston and Daviyon Nixon had interceptions – Nixon returned his for a 71-yard touchdown – and Zach VanValkenburg had two fumble recoveries.

“My first mindset was to run through the quarterback, but I saw that the right tackle was close to me, so I was like I have to go score,” said Nixon. “If I get the ball in my hands, my first thing is I want to put the ball in the end zone, so that’s what I did.”

Niemann had 17 tackles (six solo) and one tackle for loss – the most by a Hawkeye since Anthony Hitchens had 19 stops against Iowa State in 2012. Thirteen of Niemann’s 17 tackles came in the first half.

“The defensive line played a big role in (my tackles),” said Niemann. “When you have guys up there doing their job, keeping the linemen off the linebackers, it’s easy for us to make plays. I give a lot of credit for them.”

Penn State’s Sean Clifford finished 13-of-22 for 174 yards with two touchdowns and two interceptions. Will Levis – the starting quarterback – was 13-of-16 for 106 yards and he was also the Nittany Lions’ leading rusher with 34 yards. Jahan Dotson had eight receptions for 139 yards and one touchdown. 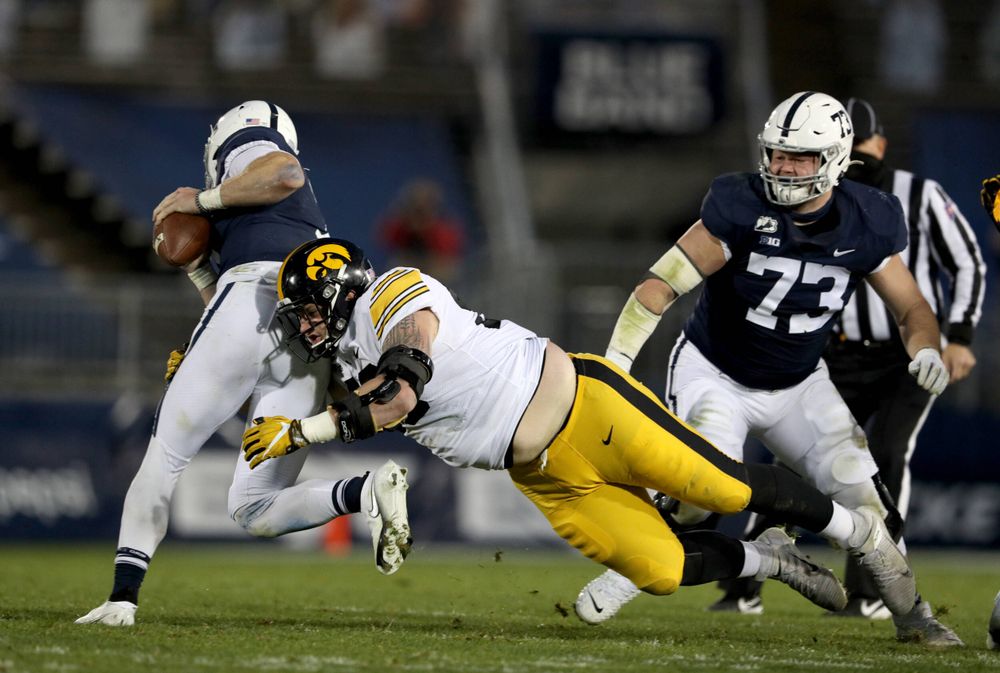 “This was a good team win for us. I am proud of our guys.  It has been awhile since we have won up here; I almost forgot how good it feels to come out of here with a victory. It’s not easy, never is, and tonight was no different.

“It was a hard fought game and an important win for us to move forward. Our guys played tough out there, they showed up ready to go, played tough and made plays when we needed to and forced some errors.  That was good to see.

“We’re doing a good job with our turnover takeaway margin — I am not happy with our turnover — but our defense is doing a good job with the takeaways and if you can score off that, that’s good. Daviyon (Nixon) took care of that for us and the other ones we converted into touchdowns and they got a fourth down stop at midfield also, and we took the ball and scored on that.  That’s good team football and I am happy to see our point production continue to be healthy.

“Bottom line, this was a good step for us. It wasn’t smooth or easy in the second half, which is what you’d expect in a Big Ten contest, with a team that has the talent Penn State has.  Our guys fought through that and hopefully in the long run that will be a good experience for us.  It isn’t quite the same as 2002, but similar in that way.  To experience adversity, the bumps, everyone kept playing and stuck together. Hopefully that’s something that will pay off for us as we move on. That’s the key thing.

“The players have every reason to enjoy the ride home and feel good about it.” 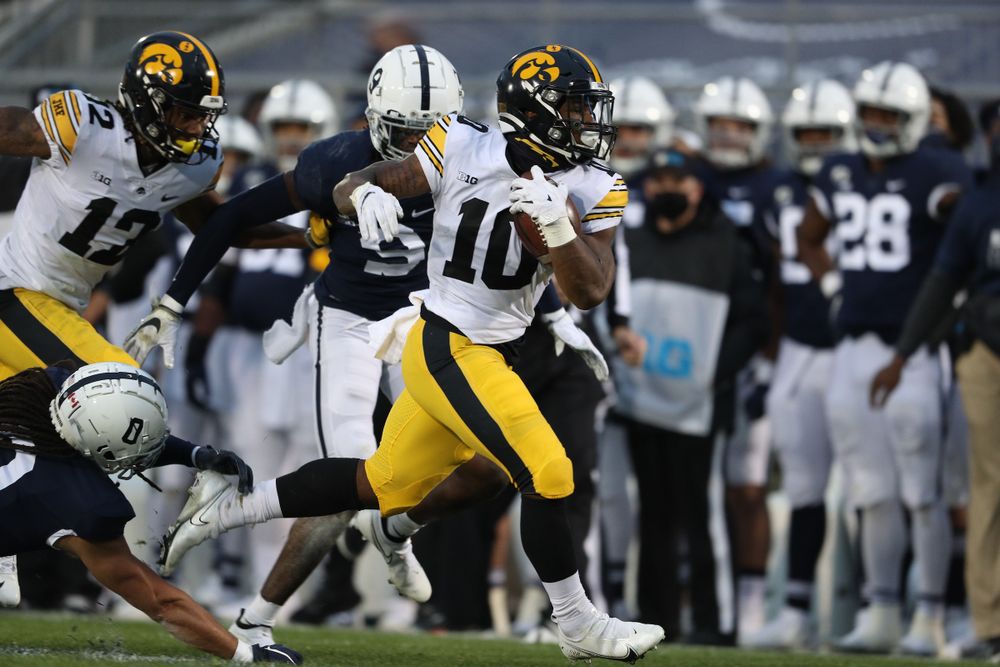 The Hawkeyes return to action Nov. 27, hosting Nebraska in the Heroes Game at noon (CT) inside Kinnick Stadium.