No. 5/6 Iowa Rolls in Season Opener

IOWA CITY, Iowa – Luka Garza was Luka Garza and the No. 5/6 University of Iowa men’s basketball team rolled to a 97-67 victory over North Carolina Central on Wednesday afternoon on Mediacom Court inside Carver-Hawkeye Arena.

It was the Hawkeyes’ 10th straight win in a season opener dating back to the 2011-12 season.

While the Preseason National Player of the Year was the headliner, the Hawkeyes got strong contributions from a pair of newcomers.

Redshirt freshman Patrick McCaffery did a little bit of everything, finishing with 16 points, three rebounds, one block and one steal in 21 minutes, while freshman Keegan Murray finished with 12 points and grabbed seven rebounds in 21 minutes.

“They made a tremendous impact on the game with their energy level,” said head coach Fran McCaffery. “They both got to the offensive glass, both ran the floor in transition defensively, and were active.  They played like veterans and that’s what I expected of both of them, they’re good players.” 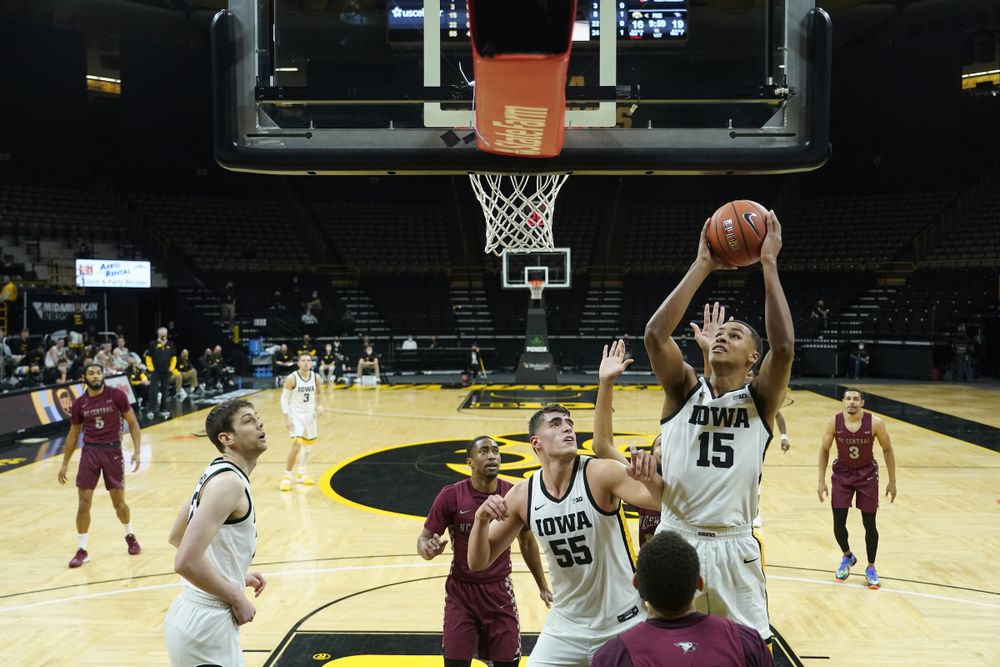 NC Central jumped out to a 10-6 lead and the Eagles led 22-20 at the 8:49 mark. The Hawkeyes followed with a 20-2 and 24-4 run turning a two-point deficit into a 44-26 lead. Patrick McCaffery scored eight straight points during the stretch, Bohannon hit two 3-pointers and Garza scored the final eight during the stretch.

The Hawkeyes, who shot 53.6 percent in the first half, pushed their lead to 20 on a Fredrick 3-pointer with 14:15 left. Iowa led by as many as 33 following back-to-back 3-pointers from Keegan Murray with 7:59 to play.

“I try to be as versatile as I can,” said Keegan Murray. “Defending, getting after rebounds, and hitting shots when I am open. When I saw the first one go down, it built the confidence that I could see the ball going through the hoop and that led to me hitting the second one.”

SUPPORTING NUNGE
The Hawkeyes started the day on a somber note by supporting teammate Jack Nunge by virtually attending the funeral of Nunge’s father, Mark.

“It was important for us to do that,” said Fran McCaffery. “We love Jack, we’re there for Jack.”

“We were trying to be there for him,” said Garza. “We wanted to show support for his family… his family is our family. It’s the Iowa basketball program.”

GARZA FADE?
Garza displayed a new toy in his arsenal in the second half with a step back fadeaway jumper, a la Dirk Nowitzki.

“That’s a move I have worked on a lot, trying to add some moves in the post and trying to get comfortable making different moves,” said Garza. “Sometimes I try to switch it up and go for a fadeaway.  It as nice to see that one through, especially in a game when I was in the moment.”

5 FOR 5
It was a nice debut for the Hawkeye newcomers as all five freshmen scored in their Iowa debuts.

UP NEXT
The Hawkeyes return to action Friday, hosting Southern at 4 p.m. (CT) on Mediacom Court.