The senior center scored 41 points and made 14-of-15 field goals, three 3-point field goals, and 10-of-12 free throws to lead the No. 5/6 University of Iowa men’s basketball team to a 103-76 rout of Southern on Friday afternoon on Mediacom Court inside Carver-Hawkeye Arena.

“I don’t think I realized (I hadn’t missed a shot in the first half), I felt like every shot I took, I should have made,” said Garza. “The one I missed I felt like I should have made that as well. I have that confidence every time I step on the floor. I am a guy that thinks I can make every shot I take because I practice a lot.  When you work hard you’re able to make shots.

“I’ve put in enough work in to each shot when I put it up I have a strong feeling it is going to go in. If it doesn’t, we’re on to the next possession.”

Garza is now one of two Hawkeyes – along with John Johnson – to register two career 40 point games in school history. He scored 44 last season at Michigan.

“He’s terrific,” said junior Joe Wieskamp of his All-America teammate. “He’s getting the job done from 3.  He’s a terrific player and it’s going to be like that all season long.”

Garza was a perfect 12-for-12 from the field in the first half en route to 36 points. It is believed to be the highest scoring half in school history. Garza just missed a double-double for the game, finishing with nine rebounds and three blocks in 29 minutes.

“I haven’t had too many guys score 36 in a half,” said head coach Fran McCaffery. “I’ve had guys get on rolls over the years, but that’s a big number. They don’t have a lot of size, so kudos to our guys to recognize he had it going and to load him up.

Wieskamp was the only other Hawkeye in double digits with 16 points. He made five field goals – four 3-pointers – and had seven rebounds. Senior Jordan Bohannon had seven assists.

Southern out-rebounded Iowa, 42-37, but the Jaguars committed 16 turnovers, which the Hawkeyes turned into 28 points. Iowa limited Southern to 38.6 percent shooting and a 7-of-21 night from 3-point range.

The Hawkeyes led by more than 20 points for the entire second half and the lead swelled to 34 with 1:18 to play. 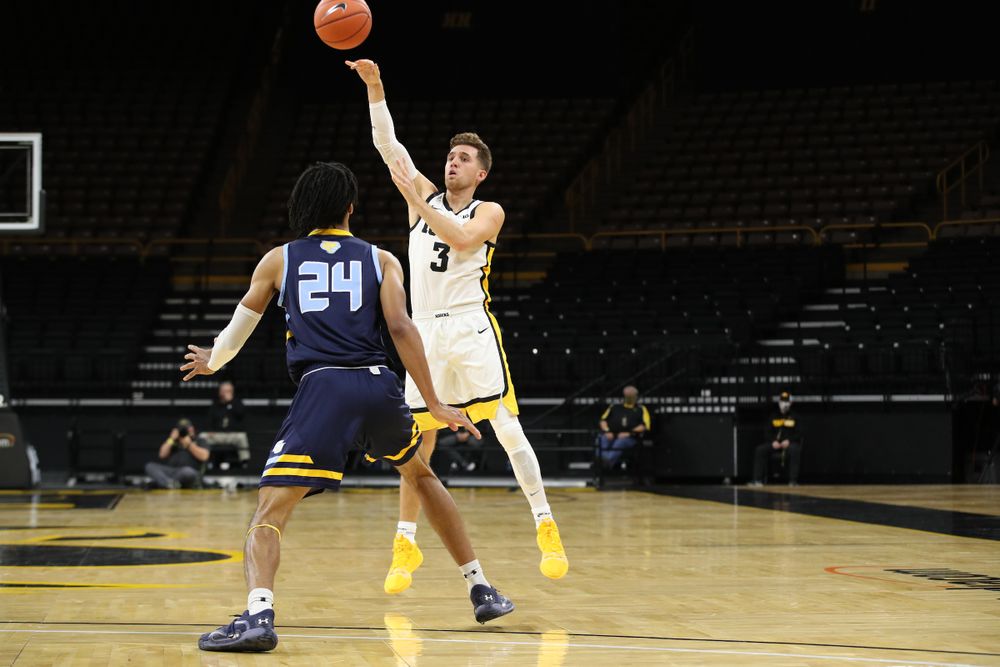 NEVER SATISFIED
The Hawkeyes won 27, but the team gave up 13 offensive rebounds in the second half and 19 for the game.

“Our second half we got a little comfortable, we gave up some offensive rebounds,” said Garza. “We can’t let that happen. We’ll get beat by teams if we give up that many offensive rebounds.  For us that was a big thing in the locker room after the game is to never get comfortable no matter what the lead is and keep pushing forward.”

“We won by 30 and everyone thinks this is a great game, but these are games that prepare us for Gonzaga, Iowa State, and North Carolina leading into the Big Ten season,” said Wieskamp. “We have to take advantage of these games and get better.”

UP NEXT
Iowa returns to action Thursday against Western Illinois. Tipoff is set for 7 p.m. (CT) on Mediacom Court at Carver-Hawkeye Arena.