Marshall Shines When Hawkeyes Need Her Most

IOWA CITY, Iowa — Sharing the ball and sharing the points.

It’s a strategy that continues to fuel a University of Iowa women’s basketball team that improved to 3-0 on Saturday after an 85-78 win over Wisconsin on Mediacom Court inside Carver-Hawkeye Arena.

Believe it or not, it marks the first time the Hawkeyes have opened conference play with a win since the 2017-18 season when they defeated Wisconsin in Madison.

“It is great to start on a good note in the Big Ten,” said sophomore guard Gabbie Marshall. “As a young team especially, and get that first win in the Big Ten and keep going from there.”

Marshall played a major role in Iowa joining the conference win column. Three days after her defense provided a spark at Drake, she scored 15 points against the Badgers and made 3 of 5 from distance. Marshall and teammate Kate Martin swiped a game-high three steals. 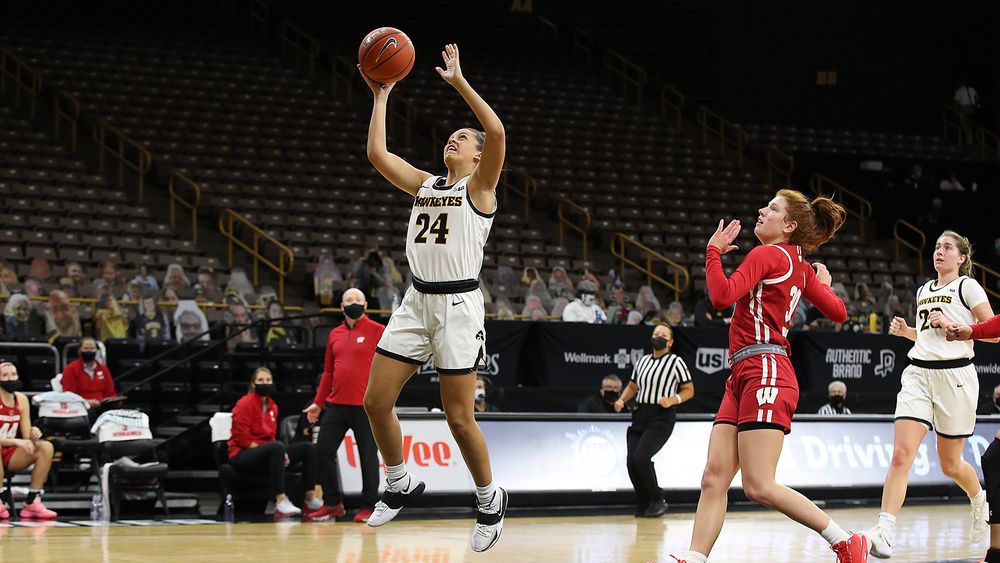 “Credit to my teammates. They made the right passes and I put myself in the right position so they could find me. It is easy when you have such good passers on your team to find an open spot and I found the open shot.”

The timeliness of Marshall’s scoring was paramount: 11 of her points came in the second and third quarters. During that stretch, Iowa outscored Wisconsin, 37-36.

“Credit to my teammates. They made the right passes and I put myself in the right position so they could find me,” Marshall said. “It is easy when you have such good passers on your team to find an open spot and I found the open shot.”

The Hawkeyes extend their home winning streak to 38, and like a majority of those, this was a group effort. Freshman Caitlin Clark overcame an off shooting game to score 23. Junior Monika Czinano added 18 and sophomore McKenna Warnock scored 12.

Iowa head coach Lisa Bluder said her team showed its youth at times, but she was elated with the scoring balance. After three games, the Hawkeyes are averaging 95 points a game and Saturday they handed out 22 assists with just eight — yes, eight — turnovers. That got the veteran coach thinking back to yesteryear.

“I don’t know the last time we had eight turnovers,” she said. “That is really good, that was a bright spot.”

Marshall also shined bright, posting a season-high in points after scoring 11 against Northern Iowa and eight against Drake. She also showed a cerebral side of her game, which added to her promising performance. 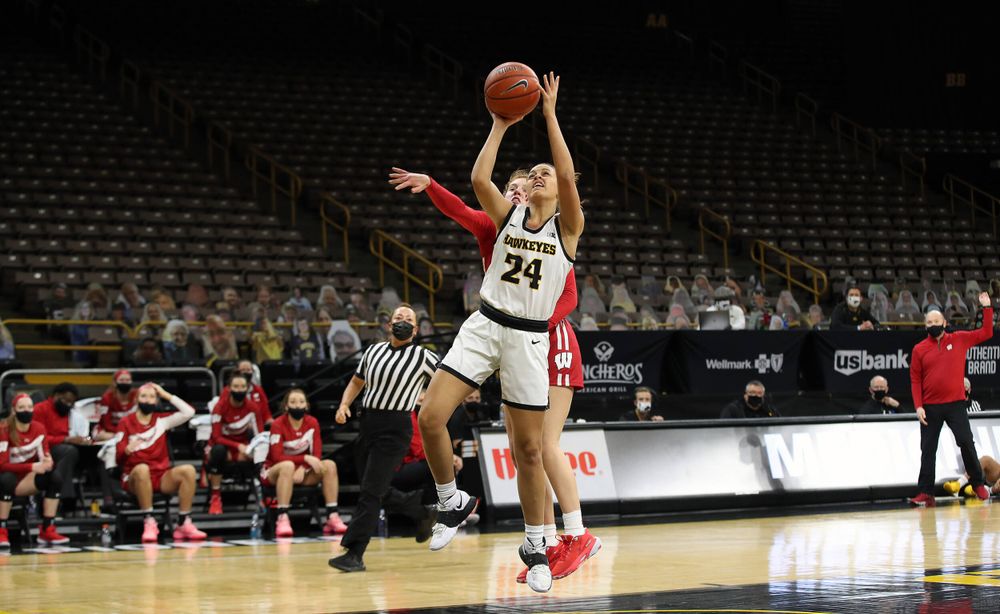 “Gabbie played a strong game mentally and we’re going to need that out of her,” Bluder said. “With a freshman point guard like Caitlin, we’re going to need maturity out of other positions. She gave that to us on both sides of the ball; she was our best producer offensively and defensively.”

Stepping up when teammates are struggling is another hallmark of the Hawkeyes.

“We have people who can pick us up and keep the energy up,” Marshall said. “That’s how we stayed in this game, we stayed together.”

The Hawkeyes can now turn their undivided attention to Iowa State on Wednesday, their third and final in-state opponent of the season. The Cyclones (2-1) host No. 1 South Carolina on Sunday.