Not Your Average Joe; Evans Among 3 to Earn Schollys

IOWA CITY, Iowa — Even with news this exciting, University of Iowa sophomore Joe Evans didn’t want to show his hand.

When his mother, Abby, texted him Dec. 7 to see if he wanted to borrow the family car, Evans jumped on the opportunity. That way he could tell his parents the news in person.

“When she came and picked me up, I had to keep quiet,” said Evans. “I was acting strange and kind of smiling. I ended up getting home and my parents asked how practice was.

“I said it was good and that I was put on scholarship.”

Head coach Kirk Ferentz informed Evans of the news during that morning’s practice.

“I was watching kickoff and coach Ferentz came over to me and said, ‘Joe, how’s your day going?’” said Evans. “I said, ‘It’s going great, how are you coach?’ He said: ‘I just wanted to let you know you are being put on scholarship.’”

Evans immediately thought of his parents.

“They have been with me through everything and they let me go after my dreams,” said Evans. “That was my initial thought, my next thought was to thank every coach here. They gave me the opportunity to come here and showcase my skills.”

Evans says there were joyous tears at his parents’ Iowa City home.

“I have never seen my mom that excited,” said Evans. “She started tearing up, my dad did as well. I tried to hold those tears back, but they came out and it got emotional. It was one of the greatest experiences in my life so far.” 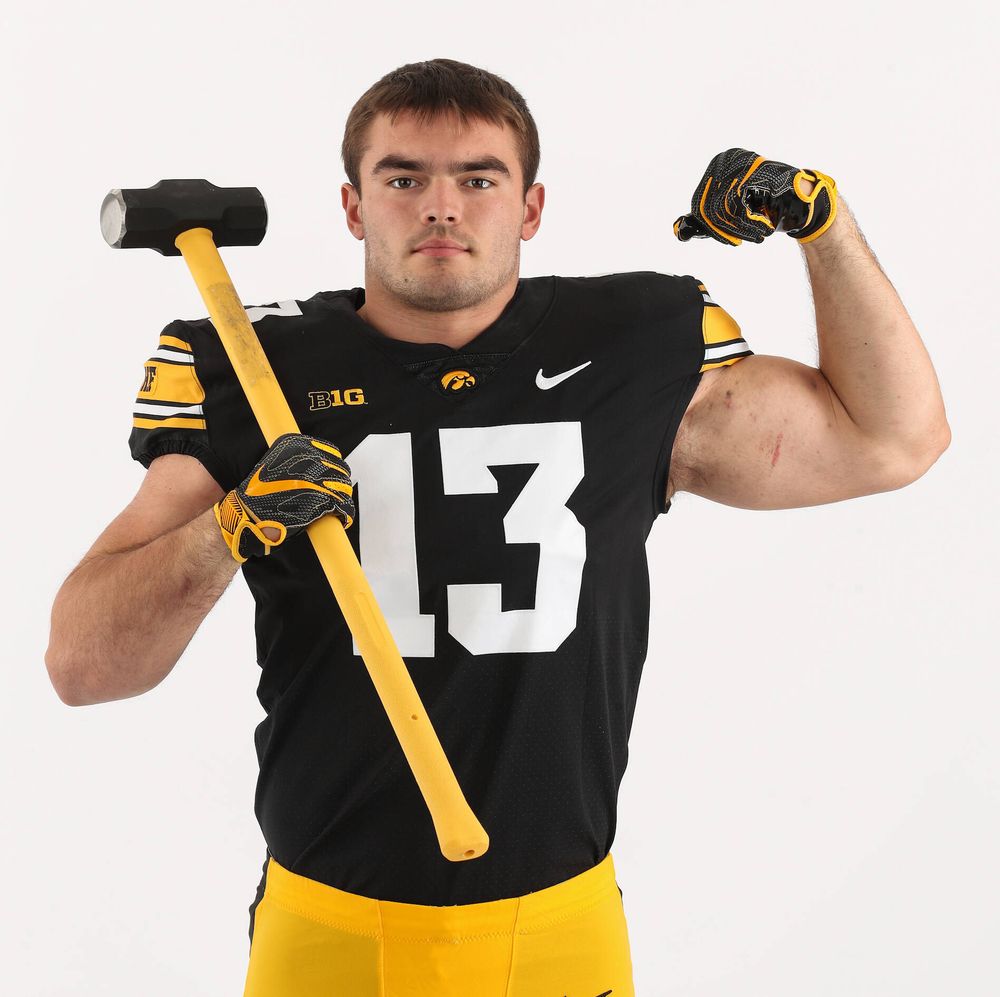 “If you’re going to be a walk-on, this is the best place to go, hands down,” said Evans. “I was never treated differently. You don’t know who is on scholarship or who is a walk-on. I knew I needed to develop, so I knew Iowa would be my No. 1 school."

Evans joined the program as a linebacker, but with injuries taking a toll on the defensive end group, the Hawkeyes needed to add depth.

“I remember (linebackers) coach (Seth) Wallace coming into a meeting and he drew the defensive end numbers on the board,” said Evans. “We had three defensive ends left and others were out with injuries. (Wallace) asked what that meant?

“We said one of us was going to have to start playing defensive end.”

Evans transitioned to the defensive line during 2019 spring practices. By the 2020 season, he saw action in eight games as a speed-rush defensive end. He played his way onto the field and was productive, finishing with five solo tackles, two assists and four sacks.

This season, Evans has seven tackles (three solo, four assists) in eight games. He has been disruptive in the pass rush, tallying two tackles for loss, one sack and four quarterback hurries.

“If you’re going to be a walk-on, this is the best place to go, hands down,” said Evans. “I was never treated differently. You don’t know who is on scholarship or who is a walk-on. I knew I needed to develop, so I knew Iowa would be my No. 1 school.

“I grew up an Iowa fan, so if (former assistant coach Reese) Morgan came into the office (at Ames High School), I would come.”

Evans was one of three Hawkeye walk-ons put on scholarship Dec. 7. The others are fullback Monte Pottebaum and wide receiver Charlie Jones.