“We wanted to send a message in our conference opener tonight against a good Purdue team,” said Wieskamp. “Collectively, we were locked in and we need to continue to do that moving forward.”

“We had to stay connected and we had to keep the effort and intensity,” said McCaffery. “I think you look at what the game plan was coming in, it was defense and rebounding, and tonight was probably our best effort of the year.”

“I thought we had a solid overall effort tonight,” Garza said. “We communicated and had the edge on the boards. Getting second shots fuels their offense and we were able to limit them to one shot tonight.”

Garza shouldered the offense in the early stages, scoring 10 of Iowa’s first 16 points. A 10-0 scoring burst gave the Hawkeyes an eight-point (21-13) midway through the first half. The Boilermakers answered Iowa’s run with an 8-0 run to even the contest (21-21) with six minutes left in the half.

After being held to a season-low four 3-pointers against top-ranked Gonzaga last weekend, the Hawkeyes regained their stroke, sinking 12 triples. Iowa’s aggressive approach both inside and outside earned the Hawkeyes 14 trips to the free throw line compared to just three for Purdue.

Iowa led by 15 points with eight minutes left, but Purdue closed the gap to seven with 3:50 remaining scoring eight consecutive points. The Hawkeyes reestablished a double digit led with a Connor McCaffery put-back and Garza’s fourth triple of the night with 2:28 left.

Trevion Williams and Brandon Newman paced the Boilermakers tonight with 14 and 11 points, respectively.

The Hawkeyes return to action Christmas Night against Minnesota (7-1, 0-1) in Minneapolis. Tipoff is scheduled for 7 p.m. (CT) at Williams Arena. 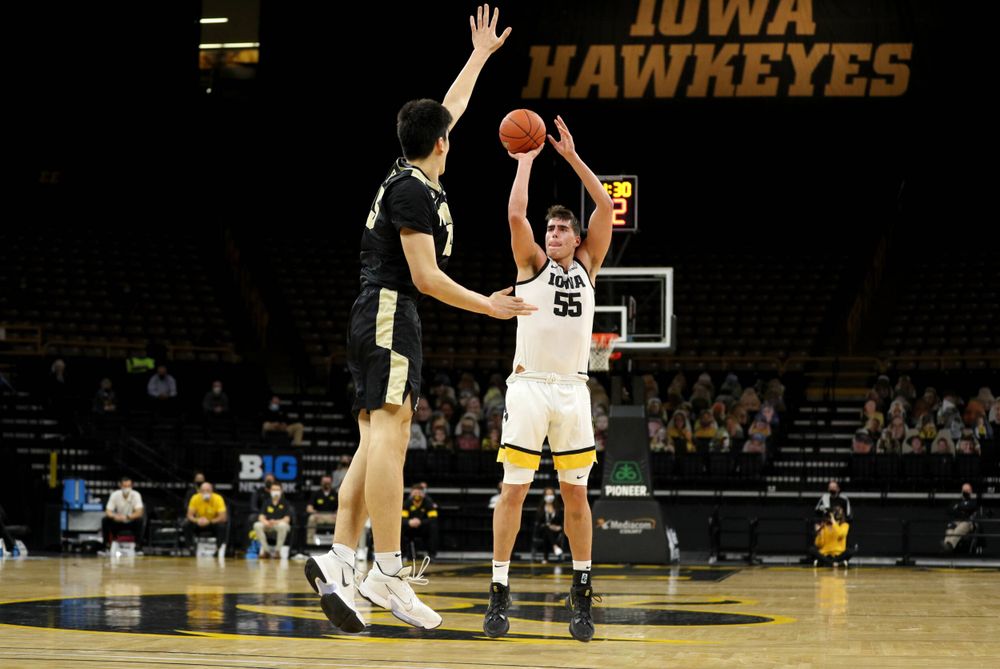