No. 9 Iowa Hosts No. 13 Ohio State in Pink Meet on Saturday

THIS WEEK
The ninth-ranked University of Iowa women’s gymnastics team hosts 13th-ranked Ohio State in its home opener Saturday at 7 p.m. (CT) at Carver-Hawkeye Arena. The competition will be Iowa’s annual Pink Meet. Due to the pandemic, there will be no general admittance to this meet.

FOLLOW LIVE
• Saturday’s meet will be televised on BTN+.
• Fans can follow along via live results at hawkeyesports.com.

WHAT YOU NEED TO KNOW
• The Hawkeyes catapulted up the rankings, moving from 25th in the preseason poll to ninth in this week’s Road to Nationals rankings. Iowa has the second best floor score nationally, while ranking ninth on beam, 15th on vault, and 16th on bars.
• Iowa has three gymnasts ranking in the top 10 on floor early in the season. Junior Lauren Guerin is tied for third (9.950), senior Clair Kaji is tied for eighth (9.925) and junor Alex Greenwald is tied for 10th (9.900).
• Guerin was named the Big Ten Specialist of the Week for the second time in her career after sharing the floor title in the season-opening meet at No. 11 Minnesota. Guerin posted a 9.950 to tie a career high for the fourth time .
• Iowa scored 48.95 or higher in all four events against the Gophers.

WHAT A START
The Hawkeyes posted a 196.40 in their season-opener at No. 11 Minnesota on Jan. 15. The score is the highest for the program in a season opener the Larissa Libby tenure (and the highest score by a Libby team in January). It is also the highest opening score since 1998 and is believed to be the best score in a season opener in program history.
• The score is one that hasn’t been achieved until the seventh meet of the season in the Libby era.
• It ties for the 10th highest score during the Libby era. 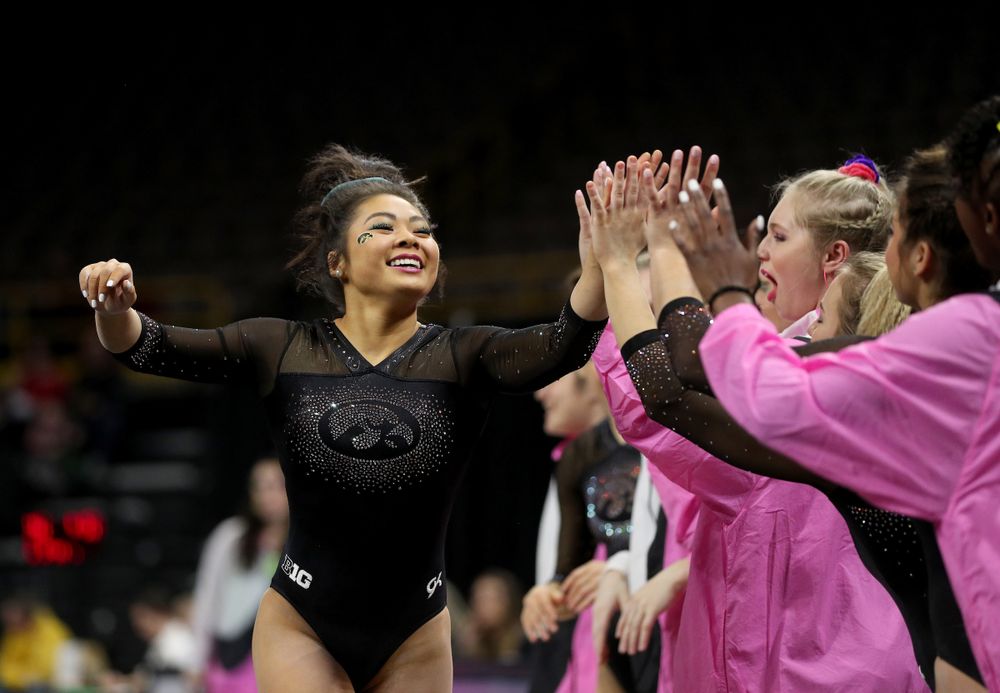 UNDERCLASSMEN SUCCESS
• Freshman Adeline Kenlin had a strong debut, tying for third on bars (9.875) and fourth on the beam (9.825)
• Freshman Aubrey Nick scored a 9.775 on beam and freshman Kendall Laplante, an early high school graduate from Seminole, Florida, posted a 9.750 on the vault.

HENDERSON IS BACK
• After an injury shortened her 2020 season, sophomore JerQuavia Henderson made a triumphant return on Jan. 15 at Minnesota. The Peoria, Illinois, tied for third on vault with a 9.850 and she posted a 9.775 on bars and 9.825 on floor.

UP NEXT
The Hawkeyes will head to Champaign, Illinois, for Week 3. The time and date of the meet against Illinois is still TBA.