MINNEAPOLIS – The University of Iowa men’s gymnastics team opened the 2021 season with a 393.650-387.050 victory over Minnesota on Saturday night at Maturi Pavilion. Senior Bennet Huang won the all-around and the Hawkeyes won five of the six events as a team.

Quoting Head Coach JD Reive
“Tonight was a solid win for the guys and we left a great deal of points on the table, so there is ample motivation to make the necessary improvements. All things considered, I’m impressed with our start.

“They are showing a lot of heart and I’m proud of them.”

FLOOR
Junior Stewart Brown and Huang both posted a 14.100 to share the win on floor. It was a career best for Brown, and freshman James Friedman scored a 13.000 in his first college meet. Iowa finished with a total of 66.950 on the rotation.

POMMEL
Junior Evan Davis led the Hawkeyes on the pommel horse with a score of 12.600, finishing fourth overall. This was Iowa’s first rotation and Drew Helberg posted a 11.750 in his first time competing on pommel. The team finished with score of 59.300.

RINGS
Davis had a career-best night while competing on rings, scoring a 13.850 to take the event title. Davis wasn’t the only Hawkeye who posted a career best, as Brown and Peyton Hobson also saw their best performances Saturday night.

Oregon natives, James Friedman and Zac Tiderman, shined in their first outing, finishing with scores of 13.500 and 13.400, respectively. Friedman tied for second and Tiderman finished fourth, helping the Hawkeyes post a team total of 66.900.

VAULT
The Hawkeyes went 1-2-3 on vault with sophomore Amari Sewell leading the way with a score of 14.500. Brown took second, and Kulani Taylor posted a new career best with a 14.350 to finish third. Iowa’s team total of 71.350 was the highest scoring rotation of the night.

PARALLEL
Sophomore Carter Tope placed first on parallel bars as he gathered a new career-best score of 13.900. Brown and Huang placed well on the bars, and Tiderman posted a 12.500, adding to the team total of 65.300.

HORIZONTAL
Similarly to the parallel bars, Brown and Huang performed well on the horizontal bar. Huang finished second with a 13.300, and Brown posted a 13.100 in his first time competing on bar. The team finished with a score of 63.850.

UP NEXT
The Hawkeyes will have a week off before returning to action Feb. 13, hosting Illinois inside Carver-Hawkeye Arena at 6 p.m. (CT). 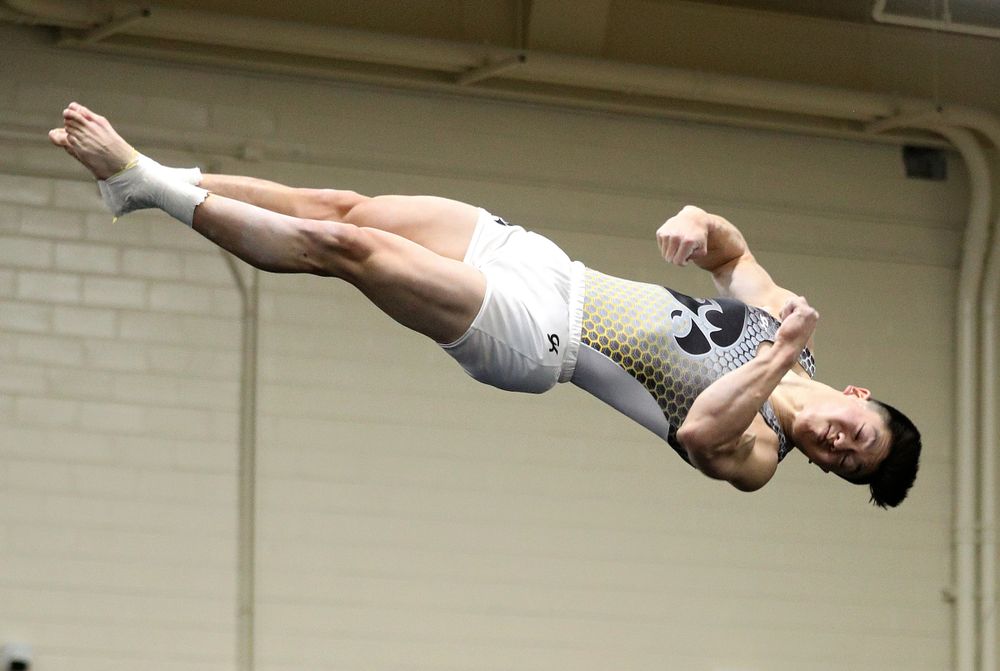