Iowa City, Iowa — The ninth-ranked University of Iowa women’s gymnastics team broke the school team record on floor and sophomore JerQuavia Henderson tied the individual floor record as the Hawkeyes and posted a 196.775 – the fifth-best team score in school history – on Saturday afternoon in a tri-meet against No. 12 Minnesota and No. 29 Maryland inside Carver-Hawkeye Arena.

The Hawkeyes downed the Terrapins, 196.775-195.350, while the Gophers posted a 196.975.  The meet wasn’t scored as a head-to-head competition against Minnesota as last weekend’s competition was the counting meet for league purposes.

Iowa posted a school-record score of 49.600 on floor to break the record of 49.550 set against Iowa State in 2004. Henderson finished with a 9.975 to win the event.  The scored tied a school record last set in 2004 and it was a career best and it is the highest score by a Hawkeye on floor this season.

QUOTING HEAD COACH LARISSA LIBBY
“This week was long for us and hard. You could see we were tired and were low in the tank. It was the first time in five weeks that I had to pull them together to focus. When you 100 percent trust your team, look at how the back two events went. Even with the beam lineup change complete, they still scored their highest score.” 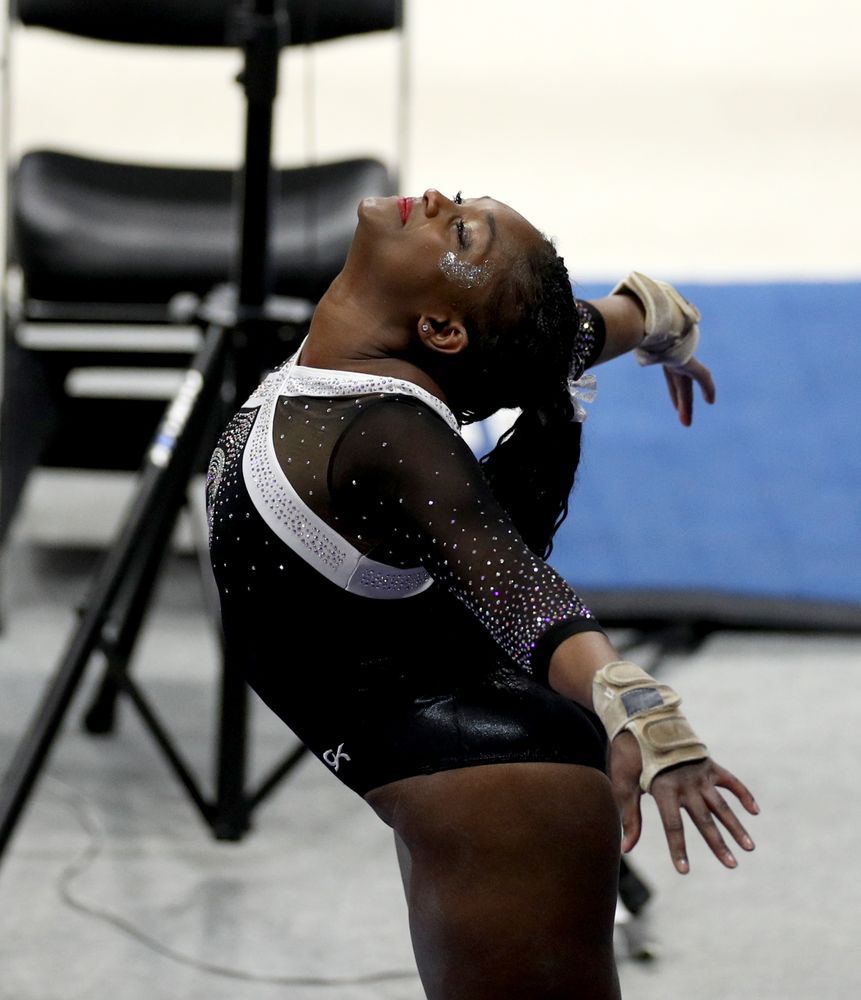 BARS
The Hawkeyes, who are second on bars in the Big Ten, posted an overall score of 48.925 – the team’s best score of the season. Five gymnasts tied for fourth place with two Hawkeyes being in the mix. Senior Clair Kaji and sophomore Ellie Rogers both scored a 9.825, which is Rogers’ season high. Freshman Adeline Kenlin and sophomore Allyson Steffensmeier scored 9.775s.

Iowa posted a 49.200 on beam, setting a new season best. Freshman Adeline Kenlin set a career best, posting a 9.925 to take second place. Henderson tied for third, posting a 9.875, which is her career best. Junior Bridget Killian and freshman Aubrey Nick both scored a 9.825, which is both of the gymnast’s season best.

Henderson has been the only Iowa gymnast to post an all-around score this season. The Illinois native finished third with a 39.200.

“I am happy to be here,” said Henderson. “Every opportunity that I have to compete, and going through the pandemic and everything else, I am taking every moment for what it is worth.”

UP NEXT
The Hawkeyes return to action on Feb. 19, traveling to Lincoln, Nebraska, to compete against the Huskers at 7 p.m. (CT).