THIS WEEK
The University of Iowa soccer team hits the road for a pair of Big Ten Conference contests beginning with a Thursday afternoon game at Illinois. The game will begin at 3 p.m. (CT) at Demirjian Park in Champaign, Illinois. The Hawkeyes then will head to Bloomington, Indiana, for a Sunday matinee against Indiana. Game time is set for noon at Bill Armstrong Stadium.

Due to the coronavirus pandemic, general admission fans will not be permitted to attend the contests.

WATCH/FOLLOW LIVE
• Both Thursday and Sunday’s games will be streamed live on BTN+.
• Live stats will be available on hawkeyesports.com.
• Fans can follow the Iowa soccer program on Twitter (@HawkeyeSoccer) for live in-game
updates.

WHAT YOU NEED TO KNOW
• Head coach Dave DiIanni is in his seventh season at the helm of the soccer program. In 2019, DiIanni led the Hawkeyes to a 15-5-1 overall record and an at-large berth into the NCAA Tournament for the second time in program history.
• Iowa returns six starters from a team that won a school-record 15 games in 2019. The Hawkeyes must replace a senior class that accounted for 25 goals and included the all-time wins leader Claire Graves in goal.
• Three Hawkeyes — Hailey Rydberg, Sara Wheaton, and Samantha Cary — were named to the Big Ten Preseason Honors List. Iowa was picked to finish sixth of 14 teams in the preseason coaches’ poll.
• Junior Samantha Tawharu and sophomore Gianna Gourley return as the team’s top two goal scorers with five apiece. Tawharu scored five goals on just 19 shots and she finished with 15 points — one off the team lead.
• The Hawkeyes have eight newcomers — all freshman — to round out the 28-player roster.
• Juniors Hailey Rydberg and Riley Whitaker were voted team captains for the 2021 spring season.
• The Hawkeyes will play 11 games over a seven-week period before competing in a Big TenWildcard Weekend from April 8-11. The semifinals of the Big Ten Tournament will be held April 15, but it will include only four teams.

LAST GAME
• Iowa opened the season with a 1-0 loss at Wisconsin on Feb. 20 in Loves Park, Illinois. The Badgers scored in the 10th minute en route to the win. The game marked the Hawkeyes’ first competition as a team since the NCAA Tournament in 2019. 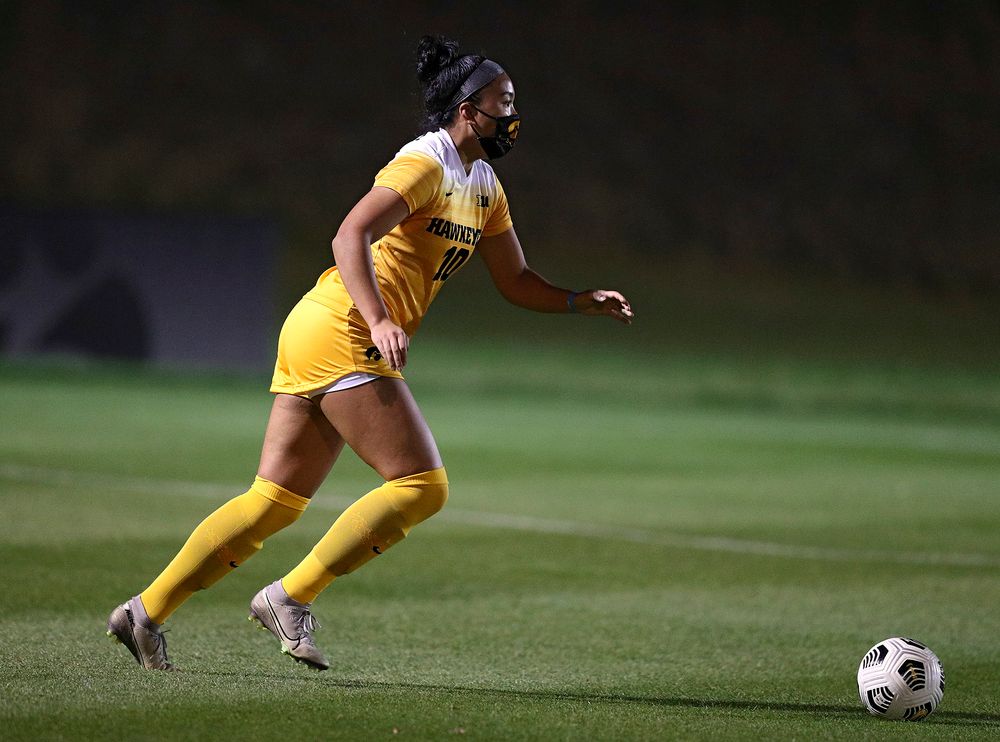 HAWKEYE DEBUTS
Five Hawkeye freshmen made their debuts against Wisconsin. Aleisha Ganief and Maggie Johnston made their first career starts, while Rielee Fetty, Jalyn Mosley, and Meike Ingles all entered as reserves. Ganief played all 90 minutes.

90 TRACKER
Three Hawkeye position players played the duration of the season-opener at Wisconsin. They were Samantha Cary (1), Aleisha Ganief (1), and Sara Wheaton (1).

DEFENSIVE DEFENDERS
The Hawkeyes most experienced position on the roster is the defender position where juniors Sara Wheaton and Riley Whitaker and sophomore Sam Cary started every game in 2019. The trio was instrumental in Iowa allowing just 18 goals in 21 games and posting six shutouts.
• The trio has started 101 combined games in their Hawkeye careers.

FRESH HAWKEYES
A year after having one of the most veteran teams in the nation, the Hawkeyes will be one of the youngest. Iowa has only one senior on the 2021 spring roster in Diane Senkowski. Eighteen of the 28 players on the roster are underclassmen.

WHO’S IN GOAL
For the first time in four seasons, Iowa has a starter not named Claire Graves in goal. Redshirt sophomore Monica Wilhelm is the only goalkeeper with game experience. The Illinois native allowed a single goal and made one save in her first career start Feb. 20 at
Wisconsin.

2021 HOME GAMES “AWAY” FROM HOME
The Hawkeyes will play “home” games away from Iowa City for at least the early portion of the 2021 season. Iowa will play its first two home games at the TBK Banks Sports Complex in Bettendorf on March 4 and March 8. The Hawkeyes also could also play
games in Cedar Rapids at Mount Mercy.

ROSTER BREAKDOWN
• The Hawkeyes have 28 players on the 2021 roster, which includes 10 freshmen/redshirt freshmen.
• Junior Samantha Tawharu and sophomore Gianna Gourley return after combining to start 16 games (eight apiece) during their first Hawkeye seasons. Junior Skylar Alward scored two goals in 18 games as a reserve as a sophomore.
• The Hawkeye midfielder are anchored by junior Hailey Rydberg. The St. Charles, Illinois, native started 11 games as a sophomore and has 24 career starts. Junior Josie Durr has three career goals in 33 career games (11 starts).
• Along with sophomore Monica Wilhelm, the Hawkeyes have a total of three underclassmen at the goalkeeper position. Redshirt freshman Sabrina Shaw and freshman Macy Enneking have no collegiate experience.
• The Hawkeyes welcome eight newcomers to the mix in 2021, including two players — Enneking and Jayln Mosley — who joined the program last January.
• Forward/defender Aleisha Ganief played on the Canadian National Team, joining Tawharu, who was a part of the New Zealand Youth National Team prior to becoming a Hawkeye.

SCOUTING REPORT
• Illinois opened the season with a 1-0 road victory at Purdue. Junior Makena Silber scored the game’s only goal in the 80th minute to seal the shutout win.
• The Fighting Illini, who were 9-8-1 last season, were picked to finish 10th in the Big Ten Preseason Coaches’ Poll.
• Indiana’s opener against Northwestern also came down to the wire, as the Wildcats netted the game-winning goal in the 85th minute to secure the 1-0 victory.
• The Hoosiers posted an 8-9-2 overall record in 2019, including a 4-5-2 mark in Big Ten play. This season, Indiana was picked to finish eighth in the preseason poll.

UP NEXT
The Hawkeyes will host Michigan at the TBK Sports Complex in Bettendorf, Iowa, for their “home opener” on March 4. Game time is set for noon.