From Forgettable to Memorable

Editor’s Note: University of Iowa senior Mallory King is one of five Hawkeyes who will advance to the NCAA Indoor Track and Field Championships on March 11-13 in Fayetteville, Arkansas. King will compete in the 800-meter run.

IOWA CITY, Iowa — Mallory King watched a replay of the women’s 800-meter final from the Big Ten Indoor Track and Field Championships that was contested Feb. 27 in Geneva, Ohio.

The top seed with the fastest time in the Big Ten this season, King sprinted ahead of the pack like she often does, including in the semifinal the day before when she ran 2:07.40, faster than any of the other eight qualifiers. King felt good and in control. Then, with 80 meters to go, her eyes saw the finish.

Maybe she pushed too early, she said.

Maybe she was too eager to win her first Big Ten medal.

For whatever reason, her legs stopped moving. About 10 meters from the finish, King tumbled to the track as runners rushed past.

“I remember falling to the ground,” King said. “I was upset, but the first thought was I had to get across the finish line.”

She knew there were nine in the final, meaning only one person wouldn’t score a team point. King was down, but not out. She got to her feet and finished in eighth place with a time of 2:11.11. 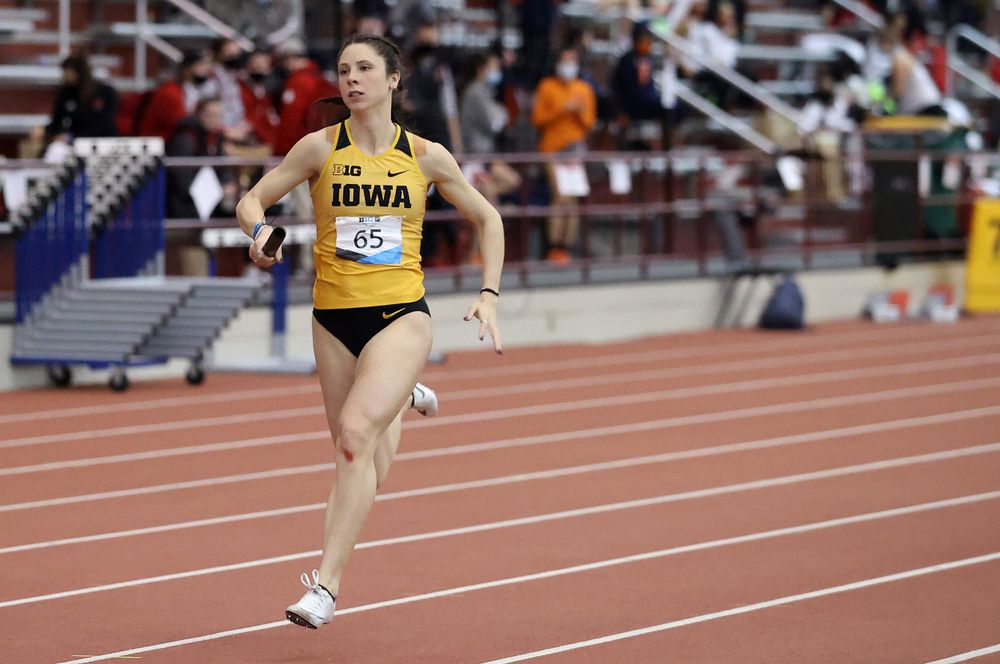 "I was extremely disappointed after the 800, but I knew I couldn’t change it, I will never be able to change how the 800 went. But I had control over my effort and attitude going into the 4x4."

“It shows her toughness and resiliency,” said Joey Woody, Iowa’s director of track and field. “She is such a team player and she has been an amazing leader for us. She is a tough competitor.”

The one team point wasn’t the 10 that King expected to secure for the Hawkeyes. But once she talked with coaches after the race and realized she was fine physically, King set her sights on the 4×400 relay that would be contested less than two hours later. She called the upcoming event a good distraction.

“There wasn’t time to sit and dwell,” King said. “I had to get back out there.”

She opened the relay with a standing start and a 54.8-second split. King teamed with Antonise Christian, Nylah Perry and Tesa Roberts for a runner-up finish in 3:37.92. She finally earned her first Big Ten medal.

“I wanted so badly to get back out there and to perform for my team,” King said. “I was extremely disappointed after the 800, but I knew I couldn’t change it, I will never be able to change how the 800 went. But I had control over my effort and attitude going into the 4×4. I think that is something I had to find the strength to perform for my team and prove what I could do on the track.”

It went from a forgettable to a memorable Big Ten Championships for King, who wants to be remembered for giving her all and putting everything she had into her races. She doesn’t play the ‘what if?’ game when it comes to race strategy, instead King focuses on how she can “make it happen” in the next race.

There is good news and another 800 opportunity for King. Because of her regular-season time of 2:05.34 (the 16th-fastest in the nation), she will compete at the NCAA Championships in that event in Fayetteville, Arkansas, on March 12 at 7:55 p.m. (CT).

“I think she has it in her to make the final and be a first-team All-American,” Woody said.

“I’m excited and eager to run that 800 again,” King said. “I want to make the national final and prove I deserve to be in that race at that meet. I have to prove that to myself.”