THIS WEEK
The 17th-ranked University of Iowa women’s gymnastics team will return to Iowa City to host No. 19 Illinois on Saturday in its home finale inside Carver-Hawkeye Arena. Action at the Senior Day meet is set to begin at 1 p.m. (CT). Due to the coronavirus pandemic, there will be no general admittance to the meet.

THAT 70’S MEET
The Hawkeyes will hold a 70’s themed meet in the home finale. The program will also recognize seniors Erin Castle, Emma Hartzler and Clair Kaji prior to the competition.

WHAT YOU NEED TO KNOW
• The GymHawks won their first Big Ten Conference title, winning the regular season crown after going 8-0 in the league during the 2021 season.
• Iowa (8-1 overall) is ranked 17th in the Road to Nationals rankings with an average score of 196.588. The Hawkeyes started the season ranked 25th before climbing to No. 9 for three straight weeks. Iowa’s No. 7 ranking during the week of Feb. 15 was the highest in school history.
• The Hawkeyes posted six season-high scores and put two gymnasts in the record books in the victory at the Big Five Meet in Ann Arbor, Michigan, en route to a score of 196.100. Iowa downed No. 5 Michigan, No. 30 Penn State, and No. 43 Rutgers. The Hawkeye win in Ann Arbor was a first for the program.
• Iowa currently has a No. 2 national rankings and leads the Big Ten on floor with a 49.463 average. Junior Lauren Guerin is ranked No.4 nationally and leads the Big Ten on floor with an average of 9.938. Iowa set the program record with a 49.600 against Maryland.
• The Hawkeyes are third in the Big Ten and 17th nationally on beam and 20th in the country on uneven bars.
• Iowa posted a season high on vault, tallying a 49.200 at the Big Five Meet on Feb. 26.
• Iowa has earned seven Big Ten weekly honors through the first five weeks with Lauren Guerin, Clair Kaji, and Adeline Kenlin all being multiple award winners. This ties the record seven weekly honorees that was set during the 2004 season.

KENLIN EARNS 3RD B1G HONOR
Freshman Adeline Kenlin was named the Co-Big Ten Freshman of the Week — her third weekly honor of the season — on March 1. The Iowa City native earned the award after posting a pair of career highs to help lead the Hawkeyes to a Big Five Meet victory last weekend in Ann Arbor, Michigan. Kenlin posted a her first career-high on bars, scoring a 9.900 to tie for fifth place. Her second career-best came on vault, where she tied for sixth place after scoring a 9.850. 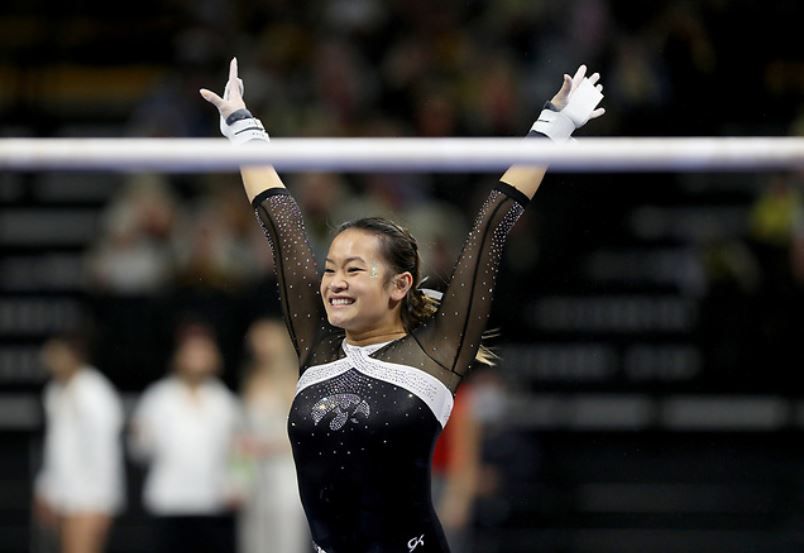 HENDERSON’S ALL-AROUND
Sophomore JerQuavia Henderson is the only Hawkeye to compete in all-around this season. The Illinois native posted a career-best — a 39.325 — in her debut at Illinois en route to the all-around win. Henderson has a 39.175 average, which puts her fifth in the Big Ten and No. 31 nationally.

UP NEXT
The Hawkeyes will travel to Lincoln to face No. 35 Nebraska on March 14. This will be the final meet of the regular season prior to the Big Ten Championships. Action is scheduled to start at 4 p.m.