THIS WEEK:
No. 38 Iowa returns home this weekend for a pair of matches against Big Ten opponents. The Hawkeyes will challenge Wisconsin on Friday (1 p.m.), followed by No. 48 Minnesota on Sunday (noon). Both matches will take at the Hawkeye Tennis & Recreation Complex. Due to the pandemic, there will be no general admission admittance.

ON IOWA:
The 32nd-ranked Hawkeyes are a veteran squad featuring seven upperclassmen and two freshmen. Kareem Allaf is in his sixth year in the program; Jason Kerst is a fifth-year senior, while Will Davies and Joe Tyler are in their fourth year at Iowa. The Hawkeyes have won their first three home matches of the season. Iowa’s doubles team of Will Davies and Oliver Okonkwo rank No. 17 nationally and are unbeaten this spring, winning all eight decisions.

WISCONSIN BREAKDOWN:
• The Badgers are 1-5 overall and 1-4 in conference competition. Wisconsin’s lone victory came at Michigan State (7-0) on Feb. 21.
• Wisconsin’s roster of nine is comprised of five upperclassmen and five international student-athletes.
• Iowa is 34-69-2 all-time against Wisconsin. The Hawkeyes beat the Badgers the last time the two teams met (4-3) on March 24, 2019, in Iowa City.

#48 MINNESOTA BREAKDOWN:
• The Golden Gophers are 2-3 overall and 2-3 in league play. Minnesota’s two wins came over Northwestern (4-3) and Wisconsin (5-2).
• Minnesota’s roster of nine has five international student-athletes and three seniors.
• Iowa is 37-59-3 all-time against Minnesota. The Hawkeyes beat the Gophers the last time the two teams met (4-3) on March 22, 2019, in Iowa City. 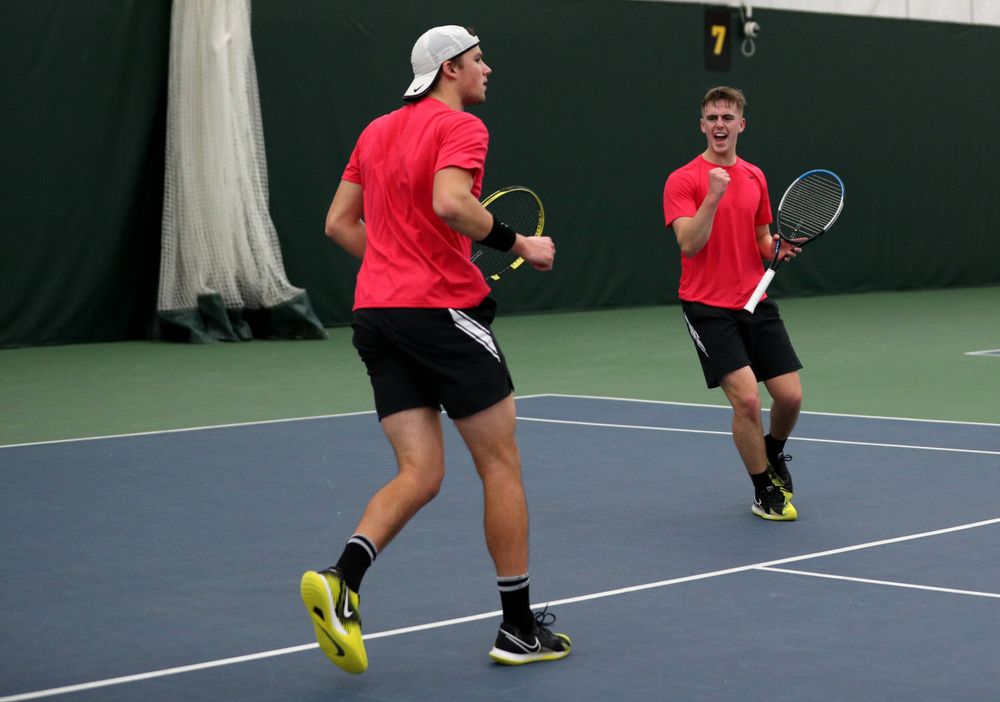 DEFENDING HOME COURT:
Iowa has won its first three home matches of the 2021 season. The Hawkeyes have won 17 of their last 19 matches in the HTRC, dating back to April, 2019.

HAWKEYE NOTEABLES:
• Kareem Allaf is ranked a career-best No. 39 in singles, while the doubles team of Oliver Okonkwo and Will Davies are ranked No. 17 nationally. Allaf’s preseason national ranking is believed to be the highest by a Hawkeye.
• Allaf has 155 combined wins in singles and doubles, five victories shy of the program record set by Tyler Cleveland. Allaf has amassed 90 career singles wins, which ranks second in school history.
• Okonkwo and Davies are in their third season as doubles partners. The duo have bounced two ranked opponents this season and 10 in the last three years.