The Hawkeyes tied for third in the team standings, finishing with a score of 196.625. It is Iowa’s highest team finish since 2017. Minnesota claimed the league championship with a 197.750.

Guerin and Henderson are the Hawkeyes’ third and fourth Big Ten champions on floor and the first since 2004. Iowa has won five Big Ten floor titles all-time with three coming from Alexis Maday in 2001, 2002 and 2004.

Three Hawkeyes – Guerin, Henderson, and senior Clair Kaji – were also named to the Big Ten All-Championships Team by virtue of their performance at the meet.

QUOTING HEAD COACH LARISSA LIBBY
“It was a long, but exciting day. We had an incredible start on floor and held that emotion all the way through. I know the team is disappointed and that’s how I know that their mindset has changed. In the past, we would have been happy to finish third with a great score. This was different, for the first time, they felt they could do this. They felt they might be able to win both the regular season and postseason titles in the same season.

“That’s what we have needed, the mindset change and the belief that they were strong enough to win. We didn’t win, but we still are the Big Ten regular season champions and no one can change that. We gained co-floor champions and had several gymnasts on the podium, four all-conference and three all-championship team selections and the league’s Freshman of the Year. It was so close tonight, but this was a total team effort and third place honestly never felt so good.” 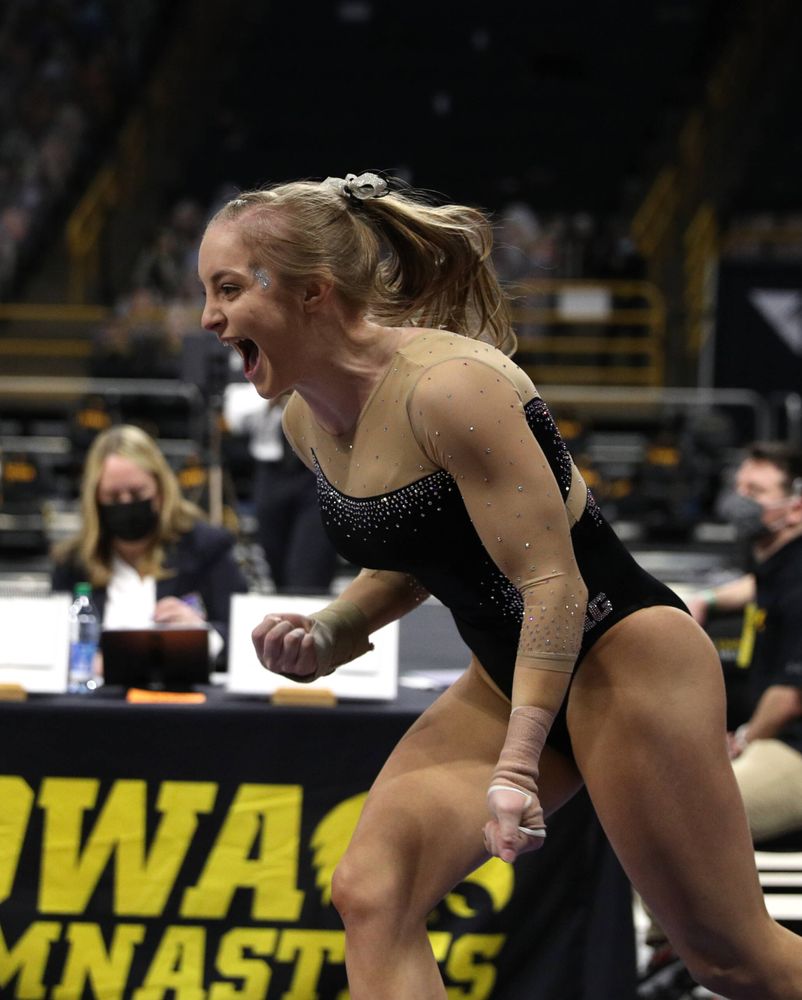 The GymHawks started the event on floor and had two gymnasts tie their career best. Iowa, who is tied for No. 3 nationally and No. 1 in the Big Ten on floor, posted a 49.500. Henderson and Guerin both tied for the No. 1 spot with two other gymnasts after both posting a 9.950.

BARS
The Hawkeyes set a new season high on bars after posting a 49.375 to tie for third place in the record books. Kaji tied for second place with a score of 9.925 – a career high, and the sixth-best score in program history. Sophomore Allyson Steffensmeier posted a 9.900 to tie for fifth and senior Emma Hartzler tied her career best with a score of 9.875 to tie for 11th. Kenlin followed with a 9.850 to tie for 14th and Ellie Rogers scored a 9.825.

Henderson and Kenlin both competed in the all-around. Kenlin scored a 39.325 to place fifth, while Henderson scored a 38.925 to finish 12th.

UP NEXT
The Hawkeyes will compete in the NCAA Regional Championships on April 1. Regional pairings will be released Monday at 4 p.m. (CT).