THIS WEEK
The University of Iowa soccer team travels to Lincoln, Nebraska, on Saturday to close out the regular season against Nebraska. Kickoff at Hibner Stadium is set for 1 p.m. (CT).

LAST GAME
A first half goal from Samantha Tawharu propelled Iowa to a, 1-0, victory over Purdue on March 28. Hailey Rydberg came up with a breakaway steal in the 20th minute, then sent a precise pass that perfectly set up the strike. From there, the defense held firm against an onslaught of 16 total Boilermaker shot attempts, earning Iowa’s third shutout of the season. Freshman goalkeeper Macy Enneking held down the fort with six saves, helping the Hawkeyes close out their home slate with a win. 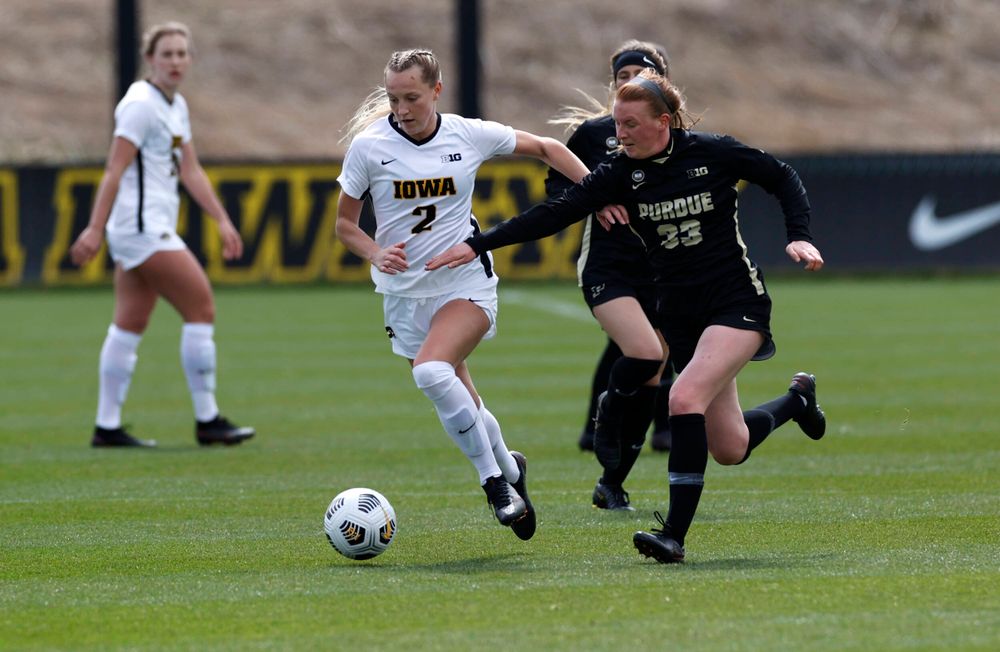 ENNEKING AT GOALKEEPER
Freshman Macy Enneking has allowed just one score in 322:03 since making her collegiate debut at Rutgers on March 18. The Hilliard, Ohio, native has notched 18 saves at a .947 save percentage. She has posted two shutouts, each of which have come in the last three games. Enneking earned her first career Big Ten honors on March 22, when she was named Co-Freshman of the Week for posting a shutout against Maryland in her first career start. She followed up that performance with a personal-best six saves in consecutive games against Penn State and Purdue.

LIMITING PENN STATE
The Hawkeyes held Big Ten regular-season champion Penn State to one goal on March 25 at the Iowa Soccer Complex.  It was the Nittany Lions’ lowest offensive output in a game this season.

FRESHMEN STRONG
Six Hawkeye freshmen — Aleisha Ganief, Meike Ingles, Rielee Fetty, Jalyn Mosley, Maggie Johnston, and Macy Enneking — have all started games this season.  Fetty has started a freshman-high nine contests, while Johnston has started six games. Ingles and Ganief have each started seven contests and Mosley has been in the starting 11 three times before being injured in the win at Maryland. Enneking made her first collegiate start against the Terps.

GETTING CHANCES
The Hawkeyes have out-shot their opponents in half of their games this season, including the majority of their losses. Junior Hailey Rydberg (23) and freshman Meike Ingles (16) lead the way in shot attempts, taking 41 percent of the team’s shots.

UP NEXT
The Hawkeyes will return to action next week for the Big Ten Wildcard Weekend.  Details will be announced at the conclusion of the regular season.