Notebook: No. 19 Iowa travels to Tuscaloosa for NCAA Regionals

THIS WEEK
The 19th-ranked University of Iowa women’s gymnastics team will travel to Tuscaloosa, Alabama, for the NCAA Tuscaloosa Regional on Friday inside Coleman Coliseum. The Hawkeyes will be competing against No. 7 Alabama, No. 10 Arkansas, and No. 20 Iowa State beginning at 1 p.m. (CT). A limited number of fans will be allowed in accordance with local health guidelines and restrictions.
The top two teams in the session will advance to Saturday’s Regional Final, which will begin at 7 p.m. (CT).

FOLLOW LIVE
• The duration of the Regional Championships will be streamed live on ESPN3. Sam Gore (play-by-play) and Ashley Miles (color) will be on the call.
• Fans can follow along via live results at hawkeyesports.com.

WHAT YOU NEED TO KNOW
• The GymHawks won their first Big Ten Conference title, winning the regular season crown after going 8-0 in the league during the 2021 season. Iowa tied for third at the Big Ten Championships.
• Iowa (10-1 overall) is ranked 19th in the Road to Nationals rankings with an average score of 196.756. The Hawkeyes started the season ranked 25th before climbing to No. 9 for three straight weeks. Iowa’s No. 7 ranking during the week of Feb. 15 was the highest in school history.
• The Hawkeyes posted one season-high score, had two gymnasts earn career bests, had five student-athletes tie their career bests, four scores landed in the Iowa record books, and the team set two season high scores on vault and uneven bars en route to a score of 196.625 at the Big Ten Championships. The Hawkeyes tied for third — the highest team finish since 2017.
• Iowa currently leads the Big Ten and is ranked No. 4 on floor with a 49.405 average. Two Hawkeyes are ranked in the top 10 nationally. Lauren Guerin is tied for No. 8 with an average score of 9.895 and JerQuavia Henderson is tied for No. 10 with an average score of 9.903.
• Four Hawkeyes are ranked in the top 10 in the Big Ten on floor. Guerin is ranked No.2, Henderson is third, Clair Kaji is tied for No. 6, and Alex Greenwald is tied for No. 10. Iowa set the program record with a 49.600 against Maryland on Feb. 13.
• The Hawkeyes are tied for third in the Big Ten and tied for 16th nationally on vault and 18th in the country on uneven bars.
• Iowa freshman Adeline Kenlin is tied for No. 10 nationally on beam with a 9.880 average.

BIG TEN CHAMPIONS
The Hawkeyes clinched their first Big Ten Conference championship, claiming the regular season title, when they won the Big Five Meet in Ann Arbor, Michigan, on Feb. 27. Iowa finished the Big Ten regular season with an 8-0 record.
• Lauren Guerin and JerQuavia Henderson earned a share of the Big Ten floor titles during the Big Ten Championships on March 20. They are the third and fourth floor champions in school history and the first since 2004.

LIBBY: COACH OF THE YEAR
Head coach Larissa Libby earned her third career Big Ten Coach of the Year honor and it is the fifth time an Iowa coach has received the distinction. Libby led the GymHawks to a Big Ten regular season title- the first in school history. Under Libby four student-athletes – Clair Kaji, JerQuavia Henderson, Lauren Guerin and Adeline Kenlin – earned All-Big Ten recognition, including three first-team honorees, which is the most for the program since 2001. 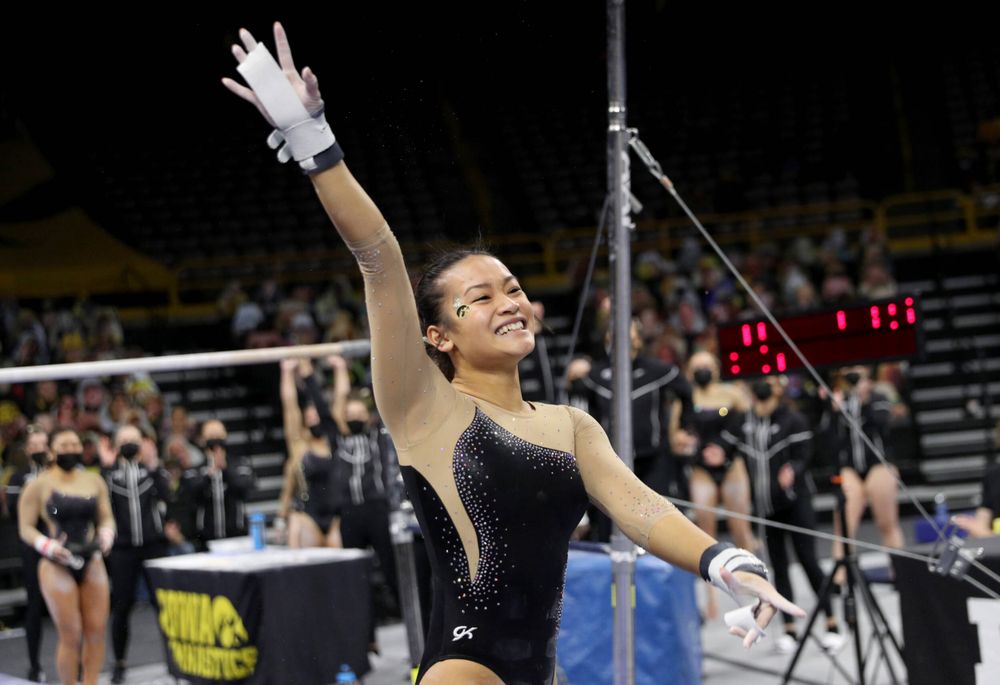 20 STRAIGHT
Head coach Larissa Libby has led GymHawks to 20 straight NCAA Regional appearances (either as a team or individually). The 2021 season is Libby’s 17th as Iowa’s head coach and 21st overall with the program.