CARMEL, Indiana — The 38th-ranked University of Iowa men’s golf team finished second at the Big Ten Championships on Sunday with a 54-hole score of 844 (+20). Sophomore Mac McClear won the individual championship, finishing alone atop the leaderboard with a 1-under par 215.

McClear has won two of the last six tournaments for Iowa, which has produced three individual medalists this season. Consistency was the name of the game for him this weekend, as McClear tied for a tournament-best 40 pars along with a 4.1 stroke average on par-fours that was the best in the field.

McClear was the only golfer to finish below par through 54 holes at the tournament. Iowa’s newest Big Ten Champ says his performance came down to a mental edge.

“I thought I was really good mentally,” says McClear. “The course was playing really hard, so it was necessary to think your way around the course. Obviously [we are] a little disappointed we came up one shot short, but a very solid week for us. It should give us a lot of momentum continuing into the postseason.”

McClear’s performance was singular, but he had plenty of backup as fifth-year senior Alex Schaake (T-2) and fellow sophomore Garrett Tighe (T-10) also placed in the top ten. Schaake has strung together an impressive stretch of finishing five place or better in Iowa’s last five tournaments. Schaake’ s 11 birdies this weekend led the Hawkeyes and tied for the second-best total in the field. The Omaha, Nebraska, native fired off six of those birdies during the final round, including three in a row on the front nine.

McClear and Schaake were each named to the All-Championships Team, which honors the top-five performers at the event. The duo previously finished one-and-two at the Spartan Collegiate at Sea Island in March. 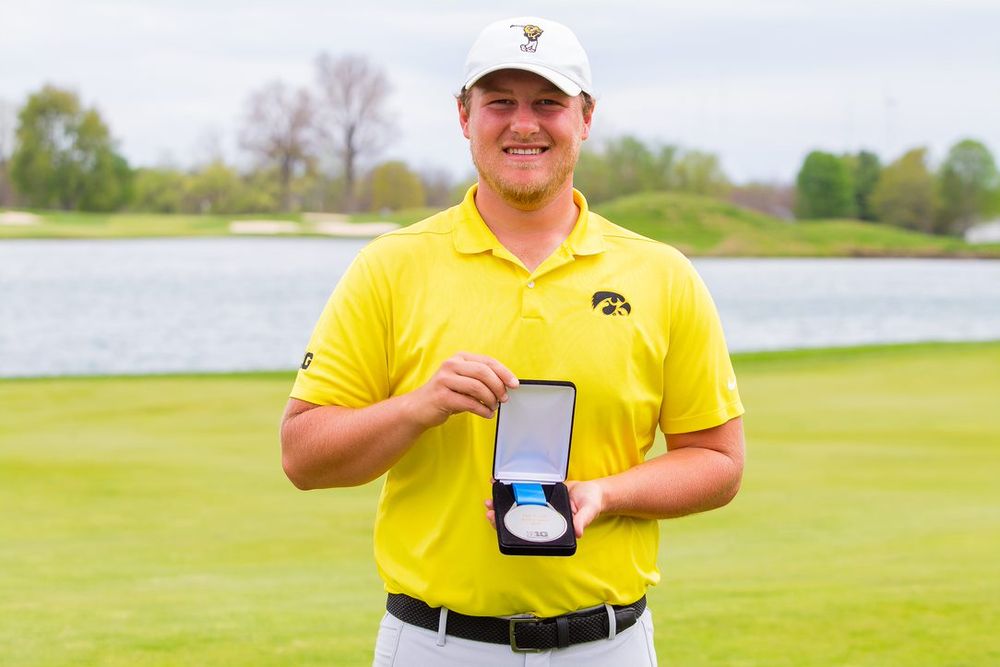 Tighe, who made his second start of the season at the Big Ten Championships, made 10 birdies over the weekend, which was the second most for the Hawkeyes.

Junior Gonzalo Leal-Montero also tied for 26 for Iowa, recording a 1-under par outing in the final round that was one of just seven below-par scores on Sunday. Senior Jake Rowe tied for 59 at the tournament.

Sunday marked a continuation of Iowa’s consistent string of success at the Big Ten Championships. The Hawkeyes have finished runners-up in four of the last 11 events, including three of the last six. Iowa has placed third or better in eight of the past 11 tournaments. The second-place finish marks the program’s best Big Ten Championships performance since 2016.

The Hawkeyes led for much of the final round on Sunday before ultimately coming up one stroke short of defending-champion and 11th-ranked Illinois. The Illini have won six straight team championships.

Iowa separated itself as one of the conference’s strongest programs this season, finishing second at Big Ten Match Play to start year before winning two tournaments, producing three medalists, and notching the Big Ten’s top individual finish at the Robert Kepler Intercollegiate, which featured 11 conference teams. Iowa received three Big Ten Player of the Week honors this season, which tied Illinois for a conference best.

HEAR FROM HEAD COACH TYLER STITH
“It hurts to be honest, but I am still very proud of my team and happy for Mac. I am grateful for the experience we had this week. We didn’t come home with the trophy but we did come home with the knowledge and belief we are capable and closing in on that goal. We shot even par in the final round of a Big Ten Championship at a major championship venue with it all on the line. That’s something to be very proud of.

Mac’s performance was nothing short of brilliant. I can’t wait for our fans to watch the coverage on BTN. The shots he hit down the stretch were world class. He does everything the right way and he’s consistent in his training and practice.  He is a deserving champion.”

UP NEXT
Iowa continues postseason play at the NCAA Regionals on May 17-19. The NCAA Section Show will take place May 5 at 1 p.m. (CT) on the Golf Channel.