IOWA CITY, Iowa — The University of Iowa Department of Athletics recognized the academic and athletic accomplishments of its student-athletes at the fifth annual Golden Herkys on Tuesday evening. The event, organized by members of the Iowa Student-Athlete Advisory Committee (ISAAC), is an opportunity for student-athletes to recognize their peers while also celebrating the past year with the virtual awards presentation.

The event was highlighted by the announcement of seniors Luka Garza (men’s basketball) and Laulauga Tausaga as “UI Athletes of the Year”. Seniors Spencer Lee (wrestling) and Marissa Mueller (women’s track & field) were named “Hawkeyes of the Year,” which encompasses the athletics department core values of WIN, GRADUATE, DO IT RIGHT. 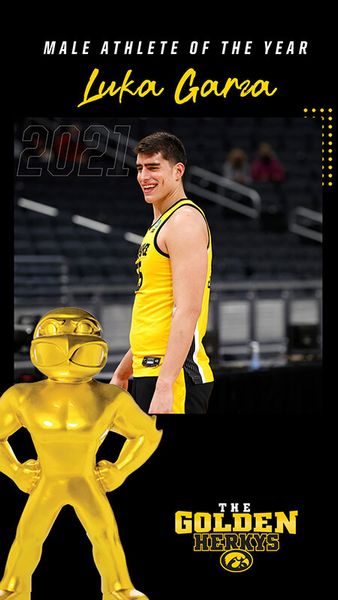 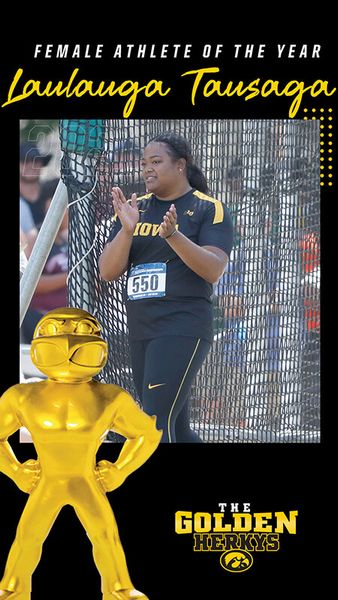 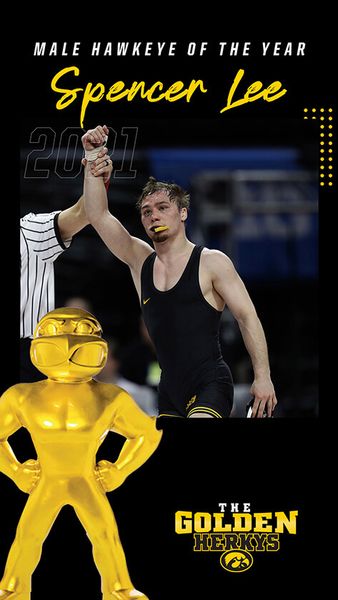 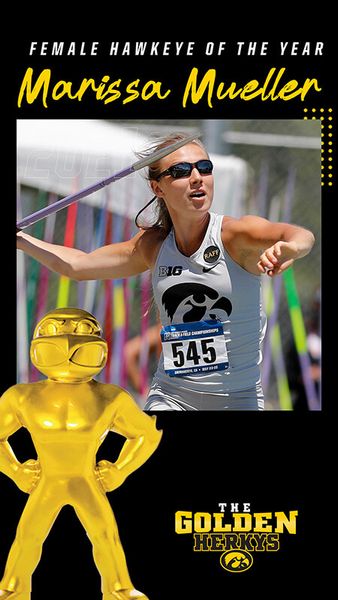 Tausaga won the 2019 NCAA discus title and was a finalist for the 2019 World Championships. An eight-time All-American and five-time Big Ten champion in the throws for Iowa, she holds school records in the indoor shot put, outdoor shot put, weight throw, hammer and discus. During the 2020 indoor season, Tausaga was named USTFCCCA Indoor Midwest Regional Female Field Athlete of the Year, Big Ten Indoor Field Athlete of the Year, and Big Ten Indoor Female Field Athlete of the Championships. For the 2021 outdoor season, she leads the nation in the discus (199-6, 60.81m) and posted the fifth-best mark in the shot put (58-10 1/2, 17.94m). A native of Spring Valley, Calif., Tausaga is majoring in Communication Studies and African American Studies.

Lee won his third NCAA title in 2021, becoming the seventh three-time NCAA Champion in Iowa wrestling history. The Murrysville, Pa., native was awarded the Hodge Trophy, which goes to the nation’s top college wrestler, for the second straight year. During the 2021 season, Lee posted an undefeated record and scored bonus points in all but one match en route to a Big Ten title and being named Big Ten Wrestler of the Year. A Sport & Recreation Management major, Lee interned with Iowa’s “Fan First” Program, is a three-time Academic All-Big Ten honoree, volunteers his time including with ISAAC Day of Caring, and is a frequent volunteer for student-athlete speaker panels with the I-Club. He also earned the Golden Herky for Record Breaking Performance.

Mueller made history by becoming just the 22nd person, and one of only two women at the University of Iowa, to earn the prestigious Rhodes Scholarship. As a Biomedical Engineering major, honors student, and on the pre-med track, she has participated in over 1,000 hours of community service, many hours of research, was a senator on University Student Government, and served as the 2021 ISAAC President. The Petrolia, Ontario, Canada, native is a multiple recipient of Dean’s List and President’s List honors, as well as multiple Academic All-Big Ten and Distinguished Scholar awards. After her final season throwing the javelin for the Hawkeyes, she plans to attend the University of Oxford in England with her Rhodes Scholarship, studying stem cells and regenerative engineering, after which she has been accepted and earned a full scholarship for Harvard University Medical School. 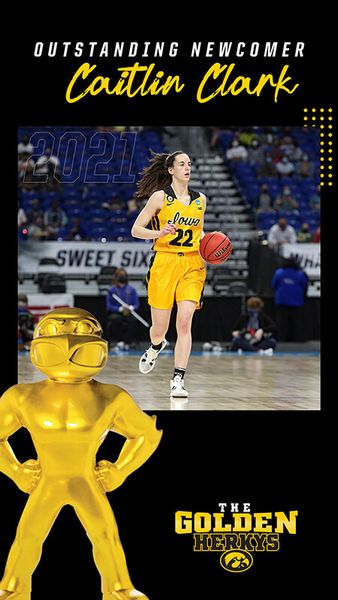 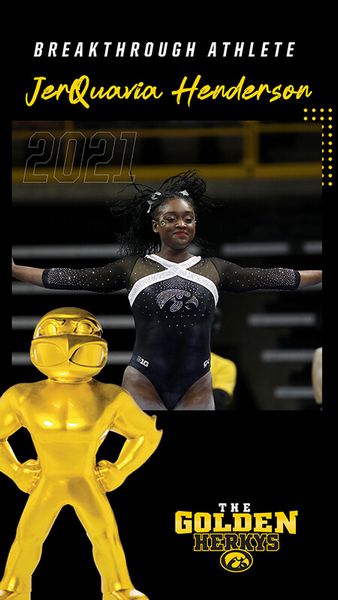 Freshman women’s basketball player Caitlin Clark was named Outstanding Newcomer. The West Des Moines, Iowa, native earned WBCA All-America honors, becoming the fifth Hawkeye and the first freshman in program history to earn the honor. Clark averaged 26.6 points, 7.1 assists, and 5.9 rebounds per game in 30 games this season, setting an Iowa freshman record with points per game, recording the fourth-highest points per game in single season in program history, and was the 2020-21 NCAA Division I scoring leader. She is the only Division I student-athlete to record 12, 30-point games this season – the most by a NCAA Division I freshman since 2000. She led the nation in total assists (214), total points (799), points per game (26.6), field goals made (266), 3-pointers made (116), and ranked second in assists per game (7.1) and 3-pointers per game (3.87). Clark’s post-season accolades include WBCA Co-Freshman of the Year and first-team All-American, Dawn Staley Award Winner, USBWA Tamika Catchings National Co-Freshman of the Year and USBWA first-team All-American, The Athletic’s Co-Freshman of the Year and first-team All-American, AP second-team All-American and WBCA All-Region Team member.

Sophomore women’s gymnast JerQuavia Henderson was named Breakthrough Athlete. The Peoria, Illinois, native missed the 2020 season after rupturing her Achilles before returning in 2021 to earn All-America honors. Henderson also earned a share of the Big Ten floor title with a 9.950 and she tied for first on floor at NCAA Regionals with a 9.925. She earned second-team WCGA All-America honors on floor after posting a 9.944 national qualifying score during the regular season. She was also a first-team All-Big Ten selection and tied the Iowa school record during a tri-meet against Minnesota and Maryland on Feb. 13 with a score of 9.975. She received a 10.00 from one judge to tie the record last set in 2004. During the course of the season, Henderson competed in all-around in eight meets. She posted a season-high 39.325 in her all-around debut at Illinois on Jan. 31 and her second highest score came at NCAA Regionals when she had a 39.250. 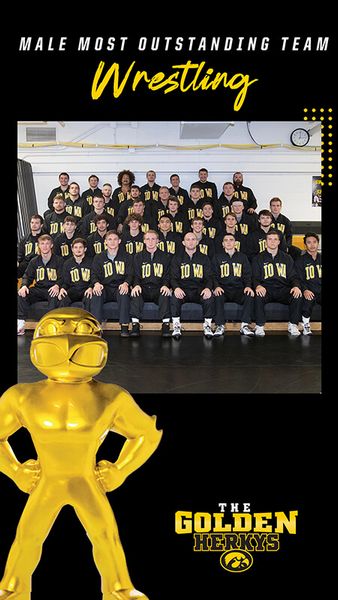 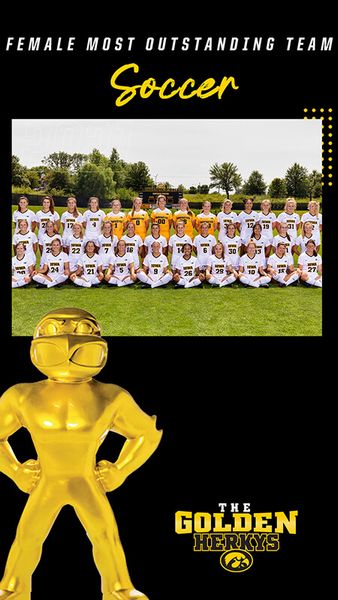 The 2020-21 Iowa wrestling team was named Male Most Outstanding Team. The Hawkeyes finished the 2020-21 season as Big Ten and NCAA champions. The conference title is the 37th in program history and the national title is the 24th in program history. Iowa crowned one NCAA individual champion, seven All-Americans, four Big Ten individual champions and 13 academic All-Big Ten honorees. The Hawkeyes were 5-0 overall and 5-0 in the Big Ten, sharing the regular season conference title with Penn State.

The Hawkeye women’s soccer team was named Female Most Outstanding Team, for both the 2019 fall season and the recently completed spring season. After starting winless through their first seven games this spring, the Hawkeyes rebounded to win Iowa’s first-ever Big Ten Tournament title and earn the team’s second-straight NCAA bid. The Hawkeyes beat first-round NCAA opponent Campbell to record the program’s first NCAA Tournament victory. Iowa is the lowest seeded team to ever win a Big Ten Tournament. As the No. 12 seed, the Hawkeyes reeled off four straight victories over a two seed (Illinois), three seed (Minnesota), one seed (Penn State) and three seed (Wisconsin). In a “normal” year, Iowa wouldn’t have even qualified for the postseason. The Hawkeyes also advanced to the NCAA Tournament in the fall of 2019. 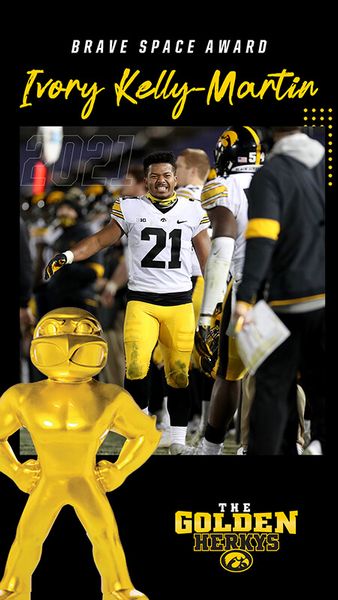 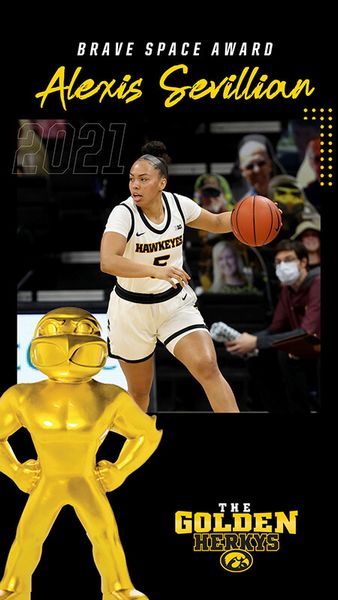 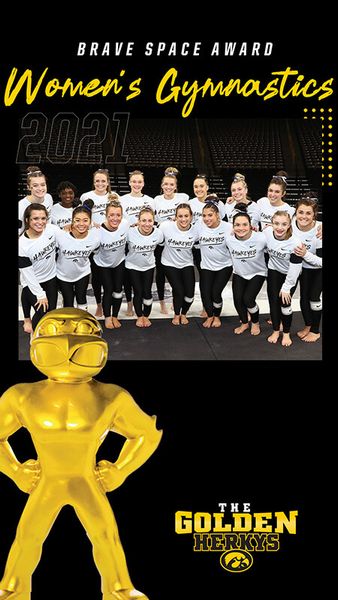 A brand-new award starting Spring 2021, this award recognizes individuals or teams who have taken action or displayed a high commitment to social justice. There will be three awards given this year, and nominations were reviewed and decided by the Athletics Diversity, Equity, and Inclusion (DEI) Accountability Board. This year’s winners were senior Ivory Kelly-Martin (football), senior Alexis Sevillian (women’s basketball), and the Hawkeye women’s gymnastics team.

Sevillian was recognized for her dedication as a two-year leader for the UI Athletics Department’s Multi-Cultural Focus Group and as ISAAC Diversity Chair, where she was integral in creating and assisting with the newly developed affinity groups.

Kelly-Martin was recognized for being instrumental in helping the football program work through challenges with DEI this past summer. He led discussions and created dialogue between coaches and players that led the program to grow much closer, and be a safer space for all student-athletes.

The women’s gymnastics team was recognized for conversations it is having as a team, and most importantly the public display of standing up for all marginalized groups in their “Enough” video, played at home meets and on social media outlets.

Hawkeye seniors Keith Duncan (football) and Wren Renquist (women’s track & field) earned the Robert Ray Award. The award, which is named after a former dean and longtime UI faculty representative to the Big Ten Conference, is annually presented by the UI President’s Committee on Athletics (PCA) to a male and female student athlete who demonstrates outstanding academic and athletic excellence and leadership.

Duncan, who joined the Hawkeyes following his prep career in Weddington, N.C., led the Big Ten in field goals per game in 2021, making 14-18 attempts on the season. He earned second-team All-Big Ten honors (Associated Press) after earning consensus All-America honors as a junior when he was one of three finalists for the Lou Groza Award. Duncan set an Iowa record with 20 career field goals of 40 yards or more and ranks fourth in career field goals (52) and sixth in career scoring (252).