With Good Company, Noel Continues with Season of Firsts

IOWA CITY, Iowa — Alexa Noel didn’t know the award existed, and in a way she was right.

The University of Iowa women’s tennis record book dates back to the 1977-78 season, but before Noel arrived on campus there was never mention of the Big Ten’s Player of the Year. That changed May 3 when it was announced that the conference coaches voted Noel the best player in the Big Ten, a first for a Hawkeye.

“It’s special and something to be proud of,” Noel said. “I know that (head coach) Sasha (Schmid), (program coordinator) Danny (Leitner) and the team, along with my parents and everyone who has been on this journey with me, are proud. I had goals coming into this season. Obviously, we’re not close to finishing yet but it’s definitely something to keep with me and know that I earned it.”

She earned it and much more. The player of the year award was accompanied by Freshman of the Year honors, first-team All-Big Ten honors and All-Big Ten tournament honors.

That’s a lot of hardware deserving of a memorable presentation. So, who better to break the news than a collection of Hawkeye greats? After all, it takes one to know one, or so thought Schmid. When it became official that Noel was about to join elite company on campus, Schmid called on an Iowa “super team” to welcome her to the club. 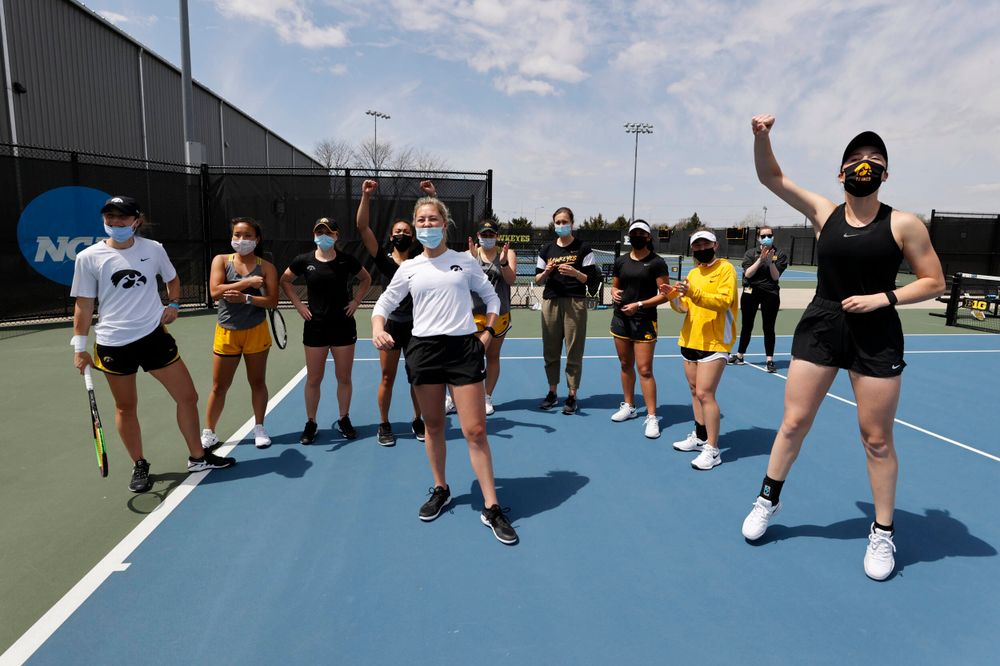 The news was kept under wraps for seven days until the Big Ten made the official announcement May 3. In the meantime, Iowa prepared for the Big Ten Tournament, where it reached the semifinals for the first time in 11 years before losing to eventual champion Ohio State, 4-2.

Iowa finished the season with a school record 12 Big Ten wins and in contention for a berth at the NCAA Championships. That invitation never came as the Hawkeyes were the first team left out of the 64-team bracket, but the final chapter of a memorable 2021 season is still in the works. The NCAA awarded Noel a seed in the singles tournament at the national championships, cementing her status as the first All-American in program history.

“It is an amazing accomplishment for Alexa to be selected,” said Schmid. “I know she is going to work hard in the next couple weeks to be prepared to make a run at a national championship for the Hawkeyes.

“We were heartbroken to have not received an at-large entry into the team NCAA Tournament. I felt like our team was deserving and it is heartbreaking for the team to end the season. I am proud of what we accomplished as a group and we want to celebrate our seniors and will always remember the successes we shared as a team. We are looking forward to Alexa’s run in the NCAA singles championship.”

All matches will be best-of-three sets. No-ad scoring and a 7-point tiebreaker (first to seven points must win by two points) at six-games-all will be used for matches. Start times and details will be announced at a later