EUGENE, Ore. — Jaylan McConico finished his University of Iowa career with a bang. Junior teammate Jamal Britt saved his best race for when it mattered most.

Together, the Hawkeye hurdlers scored 13 points by placing runner-up (McConico) and fourth (Britt) in the 110-meter hurdles final Friday at the NCAA Championships on Hayward Field.

“You can never complain when you have two guys in the final and for those guys to score big team points was impressive,” said Joey Woody, Iowa’s director of track and field.

Woody knows about impressive hurdles races. Twenty-four years ago, he won an NCAA championship in the 400 hurdles. On Friday, he watched like a proud papa as two of his prodigies helped the Hawkeyes to their highest national team finish in more than five decades.

Iowa placed 12th in 2021 with 19 points; the Hawkeyes were seventh in 1967 with 22 points. Production from the hurdle duo provided Friday’s biggest boost.

McConico took the lead through seven hurdles, then Woody thought he clipped hurdle No. 8.

“When he hit that hurdle, it threw him off balance,” Woody said. “He recovered well.” 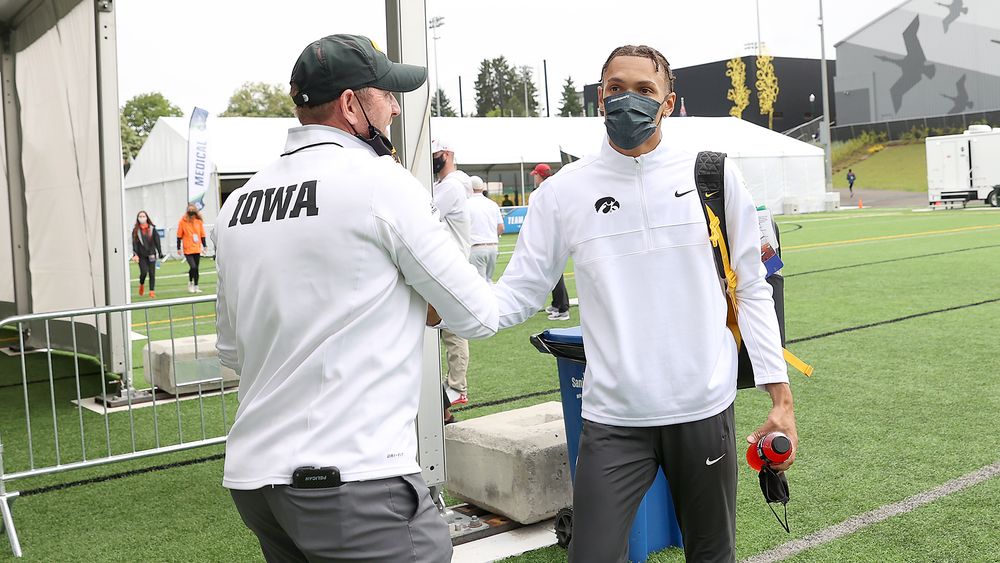 “You can never complain when you have two guys in the final and for those guys to score big team points was impressive."

Joey Woody, University of Iowa director of track and field

“It was great to come out and support the team one last time,” said McConico, who transferred from Illinois State in 2019. “The race felt good and I got out well. It’s kind of a blur and I am still processing it all. It was a good race, and I was happy to come in second.”

Alabama’s Robert Dunning took gold in 13.25. Between McConico and Britt was Arkansas’s Phillip Lemonious, who ran 13.39. Britt clocked 13.45, third-fastest in school history. He had previously run a wind-aided 13.45.

“It was a solid day. I felt better than I did all season,” said Britt, who was runner-up in the 60 hurdles at the 2021 NCAA Indoor Championships. “I’m happy with fourth — these guys are good out here and everybody is trying to run fast to win and compete.”

Also a 400 hurdler, Britt spent the season searching for a tempo in both events. He came very close to finding it Friday.

Iowa was the only school with two finalists in the 110 hurdles. After the semifinals, McConico took to social media and asked if that fact, along with past success, made Iowa “Hurdle University.” Friday’s performances from McConico and Britt served as validation.

Now McConico and Britt turn their attention to the Olympic Trials that opens June 25 for 110 hurdlers.

“I’ll get ready for the next race now,” McConico said.

“I still have to clean things up, but I’m ready to head into the Trials,” Britt said.

“It is going to be a battle with those same guys and all the pros,” Woody said. “My goal is to get three of those guys (including former Hawkeye Aaron Mallett) in the final in the Olympic Trials.”

After crossing the finish line Friday and peeking at their official times on an overhead scoreboard, Britt and McConico embraced and continued walking up the track.

“It speaks to our program and the work we put in every single day,” McConico said. “To get to come out and finally see it all bloom at nationals.”

They understand that there will be more head-to-head battles on bigger stages. And no matter what happens in the future, McConico and Britt also realize how much they advanced the reputation of Hurdle U.