THIS WEEK
The third-ranked University of Iowa field hockey team will hit the road for the first time this season, traveling to Boston, Massachusetts, for a pair of contests. The Hawkeyes open the weekend Saturday with a neutral site game against New Hampshire at 2 p.m. (CT) before facing Boston on Sunday at noon. Both games will be held at Boston’s New Balance Field.

FOLLOW LIVE
• Iowa field hockey fans can follow all contest via live stats on hawkeyesports.com. Click on the “Live Stats” link found on the field hockey schedule page to access the feed. Fans can also follow @IowaFieldHockey on Twitter for live in-game updates.
• Sunday’s game will be streamed live on ESPN+ — a paid subscription service.

WHAT YOU NEED TO KNOW
• Head coach Lisa Cellucci — the 2020 Big Ten Co-Coach of the Year — is in her eighth season at the helm of the Hawkeye field hockey program and her 22nd season overall. In 2020, Cellucci led the program to the Final Four for the 12th time — the first since 2008 — in its history.
• Iowa has started 2-0 for the second straight season after going 2-0 in the Big Ten/ACC Challenge for the first time in program history.
• The Hawkeyes are ranked third in the Penn Monto/NFHCA Preseason Poll. Iowa finished the 2020 season ranked fourth after finishing 12-6 overall.
• The Hawkeyes return all 11 starters and a total of 21 letterwinners, including every player from last season’s Final Four team.
• Iowa returns three All-Americans — Anthe Nijziel, Maddy Murphy and Ellie Holley — and a total of five players that earned NFHCA All-Region distinction.
• Nijziel is the reigning Big Ten Player of the Year and Defensive Player of the Year.

I SCORE, YOU SCORE, WE ALL SCORE
The Hawkeyes scored eight goals during the opening weekend of the 2021 season with seven different players finding the back of the cage. In contrast, Iowa had eight total players score during the 2020 season.
• Iowa’s eight goals currently are tied for third in the Big Ten with Rutgers.
• In the season-opening win over Wake Forest, five different Hawkeyes scored in the victory.
• Freshman Annika Herbine scored her first collegiate goal (in her first career game) and senior Meghan Conroy was credited with the game-winner in Iowa’s 3-1 win over No. 1 North Carolina. It was Conroy’s second career goal.

HELPING HAND
The Hawkeyes tallied seven assists in the first two games of the season with senior Ellie Holley leading the way with three helpers. Holley’s three assists are second-most in the Big Ten.

GET OUTTA HERE
Senior Grace McGuire made a career-high nine saves in Iowa’s 3-1 victory over No. 1 North Carolina. The St. Louis, Missouri, native has 12 saves in two games, which ranks second in the Big Ten. 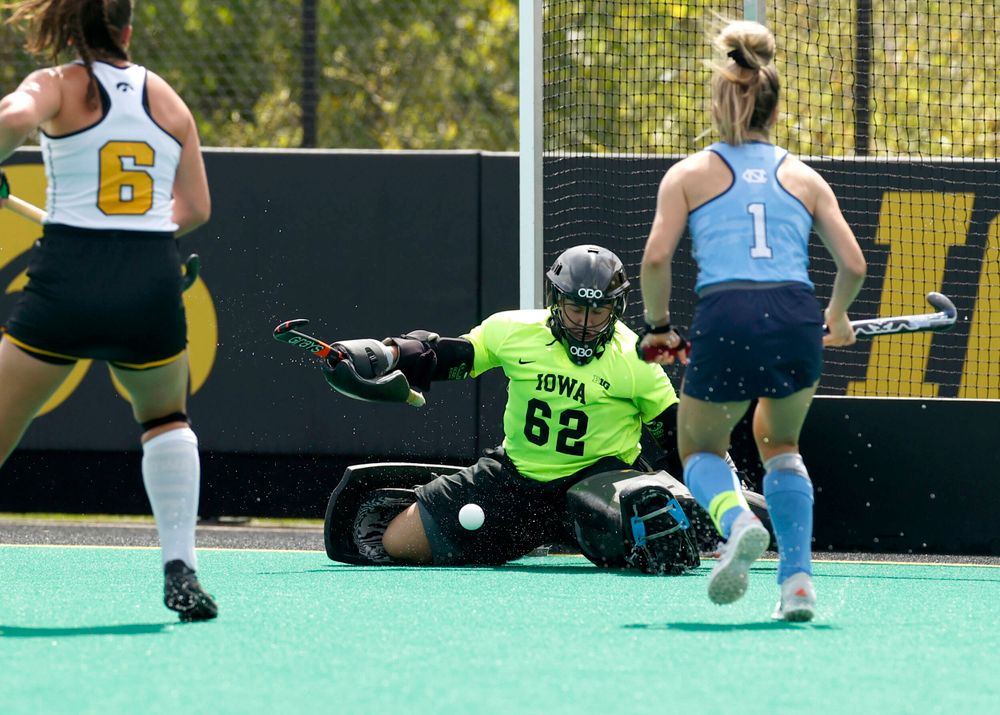 B1G PLAYERS TO WATCH
Seniors Maddy Murphy, Anthe Nijziel and Lokke Stribos were named Big Ten Players to Watch for the 2021 season. The trio has combined to start 206 games over their Hawkeye careers.

EXPERIENCE GALORE
The Hawkeyes boast an experienced team with 14 upperclassmen, including four fifth-year seniors, seven seniors and three juniors. Over the past four years, Iowa’s fifth-year seniors have won 52 games.
• Seniors Anthe Nijziel and Lokke Stribos have started all 63 games of their Hawkeye careers. Fifth-year Maddy Murphy has started 80 career games, missing only one possible game (in 2020) in her Hawkeye career.
• Seniors Ellie Holley (64 starts) and Nikki Freeman (69 starts) have each started more than 60 games in their Hawkeye careers.

THE “D” IN DEFENSE
Iowa finished with 12 wins in 2020 with eight coming in shutout fashion. The Hawkeyes allowed just 89 shots with 50 being on goal and goalkeeper Grace McGuire posted 35 saves and allowed just 14 goals.
• McGuire logged every minute in goal during the 2020 season, where she posted a 1.16 goals against average with 35 saves and a .714 saves percentage.
• Iowa’s defense did not surrender a goal in the first period in 2020.

SCOUTING NEW HAMPSHIRE
• New Hampshire brings a 1-1 record into the weekend. The Wildcats opened the season with a 1-0 neutral site victory over Ohio before falling, 3-0, at No. 5 Louisville. UNH will play Boston on Friday afternoon.
• Goalkeeper Jemma Woods has made 15 saves in two games, while Bloem van den Brekel scored the game-winner in the victory over the Bobcats in the opener.

SCOUTING BOSTON
• The Terriers bring a 1-1 record into the weekend after downing Monmouth, 2-1, in the season opener before falling 2-1 at Providence.
• Two Boston players — Miya Denison and Thalia Steenssens — were named to preseason All-Patriot League selections. The Terriers were selected to finish third in the preseason poll after reaching the Patriot League title game a season ago.

UP NEXT
The Hawkeyes return to action Sept. 10, where they will host Ohio University at Grant Field beginning at 3 p.m. (CT).