Notes: No. 1 Iowa Heads to Great Lakes State for 2 Games

THIS WEEK
The No. 1-ranked University of Iowa field hockey team heads to the state of Michigan this weekend for a pair of games. The Hawkeyes will face Michigan State on Friday at 3 p.m. (CT) at Ralph Young Field before traveling to Mount Pleasant to square off against Central Michigan at 11 a.m. Sunday at Cristy Freese Field.

FOLLOW LIVE
• Iowa field hockey fans can follow all contests via live stats on hawkeyesports.com.
• Friday’s game will be streamed live on BTN+ — a paid subscription service. There will be no streaming available for Sunday’s game.

WHAT YOU NEED TO KNOW
• Head coach Lisa Cellucci — the 2020 Big Ten Co-Coach of the Year — is in her eighth season at the helm of the Hawkeye field hockey program and her 22nd season overall. Cellucci has been a part of 263 Iowa victories and in 2020, she led the program to the Final Four for the 12th time — the first since 2008 — in its history. Iowa has posted double digit win totals in six of her eight seasons.
• The Hawkeyes are ranked No. 1 in the Penn Monto/NFHCA National Division I rankings for a second consecutive week. Iowa received 39 (of the 45) first-place votes and has 1,118 total points.
• Iowa has not trailed during the 2021 season.
• The Hawkeyes earned their fourth and fifth Big Ten weekly honors of the season as Maddy Murphy was the Co-Offensive Player of the Week and senior Lokke Stribos was the Big Ten Defensive Player of the Week on Oct. 4. Murphy also was the NFHCA National Offensive Player of the Week for the second time this season Oct. 6. It was the program’s third accolade of the season.
• Iowa is 12-0 to start the season for the first time since 1999. The 12 consecutive wins is the longest winning streak since 1999. The 1992 team won its first 20 games of the season.
• The Hawkeyes have won five consecutive games against top-seven ranked opponents and the team has seven victories over nationally-ranked foes this season.
• Iowa is 5-0 on the road this season with victories at No. 5 Louisville, No. 6 Rutgers and No. 7 Maryland.
• The Hawkeyes posted a program-record eight consecutive shutouts from Sept. 4-26.
• Iowa is one of two teams nationally that is still undefeated (Michigan, 9-0). The Hawkeyes are leading the nation in shutouts (8), rank second in goals against average (0.50) and scoring margin (3.44), third in goals per game (3.92) and scoring average (3.94), fourth in assists per game (3.00) and saves percentage (.833) and fifth in points per game (10.83).
• The Hawkeyes return all 11 starters and a total of 21 letterwinners, including every player from last season’s Final Four team.
• Iowa returns three All-Americans — Anthe Nijziel, Maddy Murphy and Ellie Holley — and a total of five players that earned NFHCA All-Region distinction.
• Nijziel is the reigning Big Ten Player of the Year and Defensive Player of the Year.

YOUR NO. 1 IOWA HAWKEYES
Iowa is ranked No. 1 in the Penn Monto/NFHCA National Division I rankings for a second consecutive week. The Hawkeyes made their debut at No. 1 on Sept. 28, marking the first time in program history the team has been atop the NFHCA poll. (The NFHCA was established in 1997.) It is believed Iowa’s last No. 1 ranking came after winning the 1986 National Championship when it finished atop the College Field Hockey Coaches Association poll.

HOW ‘BOUT THE D?
Iowa’s defense posted a program record eight consecutive shutouts from Sept. 4-26. During the stretch, the Hawkeyes surrendered just 12 shots on goal in the eight games.
• Iowa’s defense didn’t allow a goal from Aug. 29 against No. 1 North Carolina until Oct. 1 at No. 6 Rutgers. The defense went 561:03 minutes without surrendering a goal and it has allowed just six goals in 12 games (720 minutes) this season.
• The Hawkeyes have allowed 70 shots (36 shots on goal) in 12 games and have surrendered just six goals on the season. Iowa has allowed four or fewer shots on goal in 10 consecutive games.

I SCORE, YOU SCORE, WE ALL SCORE
The Hawkeyes have scored 47 goals in the first 12 games of the 2021 season with 14 different players finding the back of the cage. Sixteen different Hawkeyes have tallied at least one point. In contrast, Iowa had eight total players score during the 2020 season.
• Iowa’s 47 goals are tied for the national lead. The Hawkeyes have scored three or more goals in eight of their 12 games. Eight different players have scored game-winning goals.
• Ten Hawkeyes have scored at least two goals this season. Senior Ellie Holley leads the way with eight goals, while senior Ciara Smith is second with seven goals. Both Holley and Smith’s goal totals are career highs.
• Senior Nikki Freeman scored the game-winning goal — her first of the season — in the road win at No. 6 Rutgers. She has an efficient four goals on five shots this season.
• Iowa had three or more different players score in the first six games to open the 2021 season.

PC SUCCESS
The Hawkeyes have scored 14 goals off penalty corners during the 2021 season.

ROAD WARRIORS
The Hawkeyes are 5-0 away from Iowa City this fall with victories at No. 5 Louisville, No. 6 Rutgers and No. 7 Maryland.
• The victory in College Park was the first for the program in school history. The win over Rutgers snapped a 10-game Scarlet Knight home winning streak that dated back to the 2019 season.
• The win at Louisville was the first road win over a top-five ranked opponent since 2007 — a 2-0 win at No. 4 Duke.

IT’S A HOLLEY GOOD TIME
Senior Ellie Holley is enjoying a breakout 2021 season, leading the Hawkeyes in goals (8), game-winning goals (4), assists (7) and points (23). She has posted career highs in goals, game-winning goals and points.
• The United Kingdom native has registered at least one point in eight of Iowa’s 12 games.
• She has two multi-goal games this season, giving her three multi-goal games for her career.

STARTING STRONG
Iowa hasn’t allowed a goal in the first quarter this season, while scoring 11 times. The Hawkeyes have outscored their opponents 28-2 in the first half.

FRESHMEN CONTRIBUTIONS
Two Hawkeye freshmen — Lieve Schalk and Annika Herbine — have been key contributors during Iowa’s 10-0 start. Schalk has started all 12 games as a midfielder, where she has two assists. Herbine has two goals and one assist as a reserve forward.

HELPING HAND
Iowa has 36 assists on its 47 goals in the first six weeks of the 2021 season. The Hawkeyes’ 36 assists are third nationally and second in the Big Ten.
• Senior Ellie Holley is tied for eighth in the country with seven assists.
• Fourteen different Hawkeyes have been credited with an assist in 2021.

IRON WALL
Senior Grace McGuire made a career-high nine saves in Iowa’s 3-1 victory over No. 1 North Carolina on Aug. 29. The St. Louis, Missouri, native has 30 saves in 12 games and had a program-record eight consecutive shutouts.
• McGuire, who has an NCAA-best eight shutouts, is 12-0 with a 0.50 goals against average and a 0.833 save percentage. She leads the Big Ten and ranks second nationally in both categories.
• McGuire didn’t allow a goal in 561:03 minutes from the second quarter against No. 1 North Carolina on Aug. 29 to the fourth quarter of the Oct. 1 game at No. 6 Rutgers. 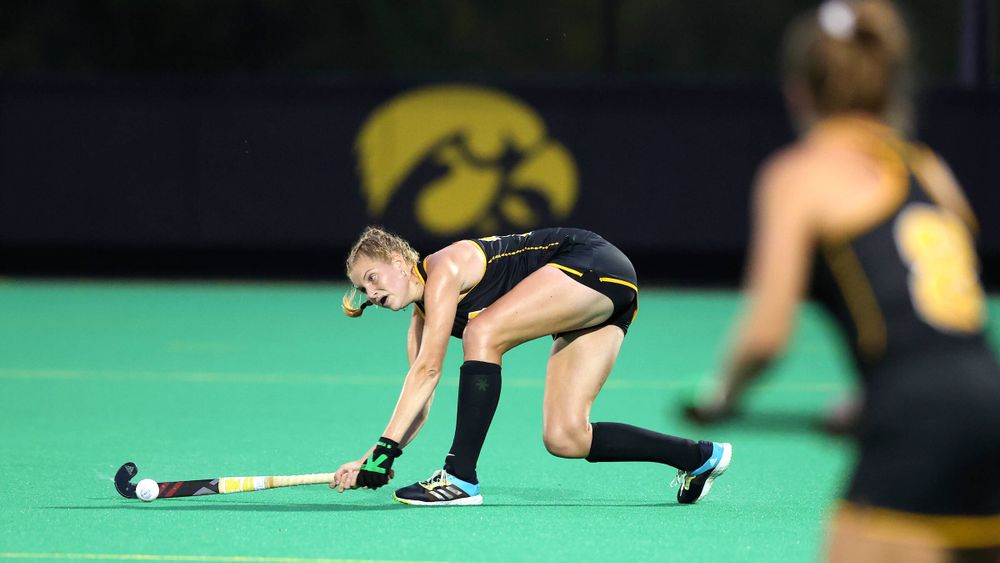 ANTHE D-POW
Senior Anthe Nijziel was named the Big Ten Defensive Player of the Week in consecutive weeks on Sept. 20 and Sept. 28 and she was tabbed as the NFHCA National Defensive Player of the Week on Sept. 29.
• Nijziel earned her first nod Sept. 20 after anchoring a Hawkeye defense that posted back-to-back road shutouts at Indiana and at No. 5 Louisville. Iowa limited the two opponents to nine combined shots in the two games.
• She earned her second honor after tallying four points (1 goal, 2 assists) in Iowa’s two-game sweep of No. 6 Penn State. Iowa’s defense limited the Nittany Lions to four shots on goal in the two consecutive shutouts.

LOKKE HONORED
Senior Lokke Stribos was named the Big Ten Defensive Player of the Week on Oct. 4 after leading the Hawkeyes to a pair of road wins at No. 6 Rutgers and No. 7 Maryland. Iowa allowed two goals and just eight shots on goal in the two contests. It was Stribos’ first career honor.

EXPERIENCE GALORE
The Hawkeyes boast an experienced team with 14 upperclassmen, including four fifth-year seniors, seven seniors and three juniors. Over the past four years, Iowa’s fifth-year seniors have won 62 games.
• Seniors Anthe Nijziel and Lokke Stribos have started all 73 games of their Hawkeye careers. Fifth-year Maddy Murphy has started 90 career games, missing only one possible game (in 2020) in her Hawkeye career. Seniors Nikki Freeman (79 starts) and Ellie Holley (74 starts) have started 70+ games in their Hawkeye careers.

MMM-URPHY
Senior Maddy Murphy earned her third All-America distinction in 2021, making her the eighth Hawkeye all-time to earn three or more All-America honors. The forward led the team with 18 points a season ago off eight goals and two assists.
• Murphy has scored double digit goals in three of her first four seasons, including a career-high 13 goals in 2018. The Tasmania native has 14 career game-winning goals.

SCOUTING MICHIGAN STATE
• The Spartans are 6-2 overall and 0-2 in Big Ten play heading into Friday’s game. The Spartans have dropped league games to No. 24 Ohio State (4-3) and at No. 1 Michigan (6-1). Their most recent game against American on Oct. 3 was cancelled.
• Michigan State has scored 29 goals this season with Merel Hanssen leading the way with five goals and three assists for 13 points.

SCOUTING CENTRAL MICHIGAN
• The Chippewas are 3-7 overall with wins over Merrimack College (4-1), No. 23 Kent State (1-0) and Saint Francis (1-0). CMU is 0-3 against the Big Ten, falling to Indiana, Michigan and Michigan State.

UP NEXT
The Hawkeyes will return to Grant Field on Oct. 15 for a nationally-ranked matchup against Michigan. The game will be televised on BTN at 2 p.m. (CT).